Via Matt Mills (not including overtime): 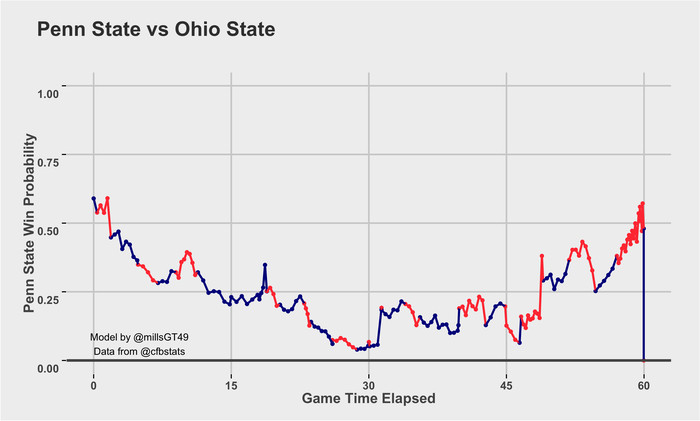 It's typically the case in Penn State games at this point, both because of the Nittany Lions' awesome defense and patchy offensive line, but Saturday's Ohio State-Penn State game featured some of the least efficient passing you'll ever see.

Penn State's Christian Hackenberg: 31-for-49, 224 yards, one touchdown, two interceptions, five sacks for a loss of 35 yards. Yards per attempt (including sacks): 3.5.

Combined, that's a net total of 244 yards in 76 pass attempts, 3.2 yards per attempt. It comes as no surprise, then, that the offenses combined for just 48 points in 29 possessions (with another seven coming on a pick six), including four overtime possessions that started at the opponent's 25.

Redshirt freshman quarterback (Barrett) going up against what is, according to F/+, a top-10 defense? That hinted at a potential Ohio State letdown, and that certainly came to pass. Ohio State was fine on standard downs but quickly crumpled in must-pass situations.

But the Buckeyes' defense held up aside from some dinking and dunking here and there, and thanks to the pass rush and a couple of interesting calls, Ohio State's still on track to be in the playoff conversation. However, I'm assuming that, when combined with Michigan State's awesome game against Michigan, we'll see the Spartans creeping back ahead in tomorrow's Big Ten win projections piece.