• With two more defensive scores against South Florida – both by defensive tackle Shilique Calhoun, who hit paydirt on a fumble return in the first quarter and an interception return in the third – Michigan State's defense has accounted for four touchdowns in two games, compared to two touchdowns by the Michigan State offense. After mounting a single scoring drive in the opener, the Spartans finally punched in their first offensive touchdown Saturday in the fourth quarter, following a badly shanked USF punt. The drive took nine plays and 4:34 off the clock to cover 33 yards.

• At the other end of the dial: After snapping the ball 71 times in less than 20 minutes of possession time in its first game, Oregon managed to get off 68 plays in less than 22 minutes at Virginia, a relatively pedestrian rate of one snap every 18.9 seconds. The Ducks finished with 557 yards (8.2 per play) in a 59–10 blowout. 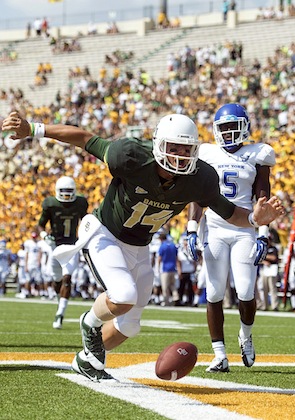 Baylor scored eight consecutive touchdowns on its first eight possessions against Buffalo, all eight of them clocking in under two minutes. The Bears needed just 42 plays to build a 56–13 lead early in the third quarter, and finished with 781 total yards despite throttling down with essentially an entire half left to play.

Despite Mettenberger's efforts, the craziest efficiency rating of the day (and the season to date) belongs to Baylor QB Bryce Petty, who earned a 300.0 for racking up 338 yards and two touchdowns on just 16 attempts.

• Not to be outdone, Oklahoma State quarterback J.W. Walsh tightened his grip on the starting job by hitting 24 of 27 for 326 yards and four touchdowns against UT–San Antonio, good for a rating of 239.2 on the heels of a shaky debut against Mississippi State. Walsh added another touchdown rushing in a 56–35 blowout that was not nearly as back-and-forth as the score indicates: After three quarters, OSU led the Roadrunners 42–7.

• Bowling Green produced a 300-yard passer (Matt Johnson), 100-yard rusher (Travis Greene) and two 100-yard receivers (Shaun Joplin and Ryan Burbrink) in a 41–22 win over Kent State, a critical decision in the MAC East. After scoring touchdowns on three of their first four possessions, the Flashes' last six possessions resulted in five punts and a fumble.

• Out of 19 offensive possessions between Georgia and South Carolina, nine resulted in touchdowns, 13 resulted in points and 15 crossed midfield into opposing territory. (None started there.) The Bulldogs and Gamecocks combined for 992 total yards and just three punts.

• Playing an entirely different game, Stanford converted 12 of 15 third-down attempts and did not punt in a 34–13 win over San Jose State. The Cardinal's nine possessions resulted in four touchdowns, two field goals, a missed field goal, a fumble and one dead clock at the end.

• Notre Dame punted on its first two series of the game, both three-and-outs, and did not punt again against Michigan, despite managing just two offensive touchdowns in a 41–30 loss. Besides the two touchdowns, the Fighting Irish's final nine possessions resulted in three field goals, two interceptions and two turnovers on downs.

In the same game, Notre Dame quarterback Tommy Rees attempted 51 passes, most by an Irish quarterback since Rees put it in the air 54 times against Tulsa in 2010. Notre Dame has never won a game in which an individual quarterback attempts 50 passes, although it did beat Pitt last year with Rees and Everett Golson combining for 53 in triple overtime. 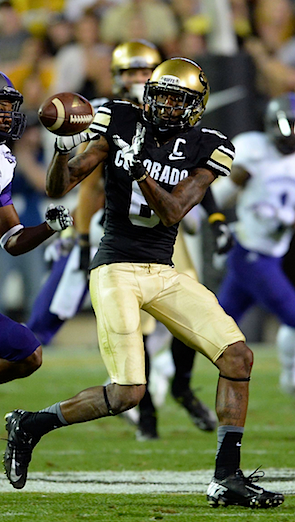 Colorado wide receiver Paul Richardson, back from an injury that cost him all of 2012, went over 200 yards receiving for the second week in a row in the Buffaloes' 38–24 win over Central Arkansas, hauling in a pair of touchdown passes in the process. Before last week's 208-yard, two-touchdown show against Colorado State, there had only been three 200-yard receiving games in Colorado's entire history, one of them by Richardson in 2011.

• Florida's offense outgained Miami's by 200 yards, 413 to 212, amassing a 16-minute advantage in time of possession in the process, but also committed five turnovers in a 21–16 upset. In nine losses under coach Will Muschamp, the Gators have turned the ball over 29 times, compared to 18 giveaways in Muschamp's 19 wins. In 12 games in the red, his teams are 3–9.

• Northwestern quarterbacks Trevor Siemian and Kain Colter combined to complete 30 of 37 passes for 375 yards and four touchdowns in a 48–27 win over Syracuse, also to four different receivers. Colter, who was questionable for the game with a possible concussion, added 87 yards and another score on the ground.

• Wisconsin outgained Tennessee Tech by 493 total yards, 606 to 113, and finished with three different backs over 100 yards rushing for the second week in a row. The Badgers finished with as many points (48) as Tennessee had offensive snaps, only two of which began in Wisconsin territory, and none beyond the Badgers' 46-yard line.

• Nebraska returned two interceptions for touchdowns in the first quarter against Southern Miss, ultimately forcing four turnovers in a 56–13 rout. Already this season the Golden Eagles have ten giveaways, at least twice as many as 112 other FBS teams.

• Texas A&M set a school record with 477 passing yards against Sam Houston State, en route to 714 total yards in a 65–28 blowout. Demonstrating his improving pocket presence against a helpless FCS defense, Jonathan Football Manziel passed for 403 yards, second only to the 453-yard bomb he dropped on Arkansas last September.

• True to form, Navy's triple-option attack racked up 70 carries for 444 yards and five touchdowns in a 41–35 win over Indiana, attempting just four passes. Almost half of that load was borne by Midshipmen quarterback Keenan Reynolds, who averaged just four yards on 32 carries, but when he managed to pitch the ball his top three slotbacks combined to average 11.8. 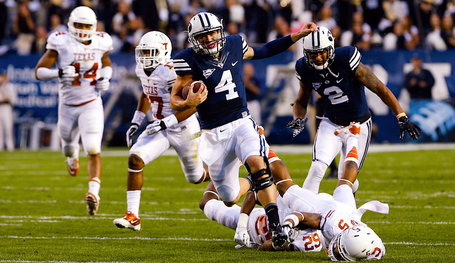 I explicitly saved the following two items for the bottom, which is the only place they belong:

• BYU rolled up 349 yards rushing in the first half against Texas, on its way to an astounding 550 for the game in a 40–21 humiliation of the Longhorns. That number is a record both for BYU and against Texas, mostly due to Cougar quarterback Taysom Hill, whose 259-yard effort on the ground was the best by an FBS quarterback since (ironically) Vince Young gashed Oklahoma State for 267 yards back in 2005. In the meantime, the only other quarterbacks since '05 to net 230 yards rushing in a single game are Brad Smith, Pat White, Colin Kaepernick, Denard Robinson, Taylor Martinez and Johnny Manziel.

Oh, right: And BYU tailback Jamaal Williams had a career-high with 182 yards on 6.1 per carry, in a supporting role, against Texas. Just, you know, for the record.

• With seven points against Washington State – which is Washington State – USC was held to its lowest point total at home since September 2001, in a 10–6 loss to Kansas State. (Another way to put that span into context: The K-State loss was Pete Carroll's second game as USC's head coach. It was played three days before the 9/11 terrorist attacks.) Besides a pair of crippling interceptions, quarterbacks Max Wittek and Cody Kessler combined to complete 11 passes for 54 yards, good for 2.4 yards per attempt. Fifty-four yards is barely halfway to Wittek's 107-yard flop in last December's Sun Bowl, which already stood as the most anemic Trojan passing performance of the current century.