Some college quarterbacks have nothing left to prove. The rest await judgment in QB Court.

–
• The Quarterback. Stephen Morris, a senior from Miami making his nineteenth career start Saturday against Florida. As a junior, Morris set Miami records for pass attempts (421) and total offense (3,415 yards) in a season, and was was voted the team's Offensive MVP by teammates. With last week's 34–6 win over Florida Atlantic, his record as a starter improved to 9–9.

• Typecasting. As a recruit, Morris was an undersized, three-star afterthought, ranking near the bottom of the not-very-touted class that signed on to play for Randy Shannon in 2010. At 6-foot-2, 185 pounds, Morris didn't fit anyone's idea of a prototypical pocket passer with a pro future, and scouts at the time labeled him as a "dual threat." In fact, though, he's run very little at Miami – only 51 times in 2012, including sacks – and has bulked up significantly, adding more than 30 pounds in three years. Not surprisingly, NFL scouts have a very different view of his talents: At the Manning Passing Academy in July, Morris won the skills competition against other pro hopefuls and left observers raving about his arm strength; one of them, Bucky Brooks of NFL.com, was so enthusiastic he went ahead and put Morris on the short list for title of "most talented quarterback in college football." At least one major draft site sees him as a potential first-rounder.

That is far from a consensus view. While Morris can make every throw, on film he's maddeningly inconsistent in terms of both accuracy and decision-making, and no less frustrating on paper: His pass efficiency rating in 2012 (138.1) barely cleared the national average, and his completion percentage (58.2) was slightly below it. Both numbers fluctuated significantly from week to week. Prolific as it could be at times, the offense as a whole still tended to fizzle against respectable defenses, failing to top 20 points in losses to Kansas State, Notre Dame, North Carolina and Florida State.

• At His Best. The love for Morris' arm isn't just hyperbole: In 2012, he ranked among the top five nationally in completions covering 40 yards (16), 50 yards (10), 60 yards (7) and so on. Roughly one completion in every five went for at least 20 yards. The average distance on his 21 touchdown passes was 31 yards – none of them better than the 62–yard bomb he launched to beat N.C. State after dancing out of a sack in the final minute:

The game-winner against the Wolfpack was Morris' fifth scoring strike of the day, and gave him the ACC record for passing yards in a game (566) just a week after he'd dropped 436 on Georgia Tech in a similarly dramatic, 42–36 win in Atlanta. In those two games alone, Morris went deep (defined as passes that cover at least 20 yards in the air) 26 times, generating four touchdowns to just one interception on those throws; later, he connected on six touchdowns in the Hurricanes' final two games, wins over South Florida and Duke, four of them covering at least 65 yards. In the ACC, only the receivers at Georgia Tech and Florida State averaged more yards per catch.

• At His Worst. So far, the booms have been matched by the busts. Following his record-setting display against N.C. State on the last Saturday of September, Morris spent October in a freezer, managing a single touchdown pass (of any distance) to three interceptions in consecutive losses to Notre Dame, North Carolina and Florida State. And although he tested the Fighting Irish early, resulting in a pair of critical drops by Phillip Dorsett on the first series of the game, from that point on the bombs-away mentality produced diminishing returns or no returns at all. For this post I watched every pass Morris attempted in seven consecutive games – chronologically, against Georgia Tech, N.C. State, Notre Dame, North Carolina, Florida State, Virginia Tech and Virginia – and logged the results on passes beyond 20 yards: 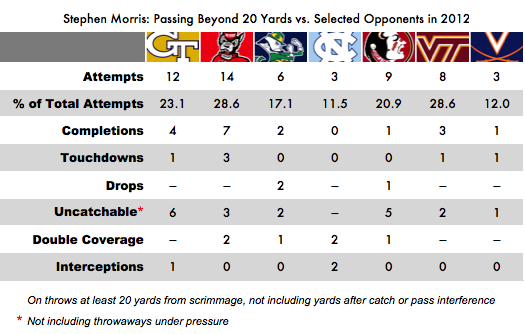 If his willingness to take chances downfield is Morris' most valuable asset, it can also be his most glaring liability. Take his two interceptions against North Carolina, against a secondary so determined not to be victimized deep it routinely kept its safeties more than 15 yards deep at the snap, even on first down. Equally determined to take his shots, Morris was easily baited by UNC safety Tre Boston into launching a pair of centerfield files for the taking:

In fact, Morris was not especially interception-prone as a junior – just seven picks in 421 attempts, and no other games with more than one – but neither was he consistent enough to sustain many drives against respectable defenses without hitting home runs. (Bizarrely, all four career starts in which Morris completed at least two-thirds of his passes have ended in a loss.) His opening-night turn against Florida Atlantic (15–27, 160 yards, 1 TD, 1 INT) was not especially encouraging. 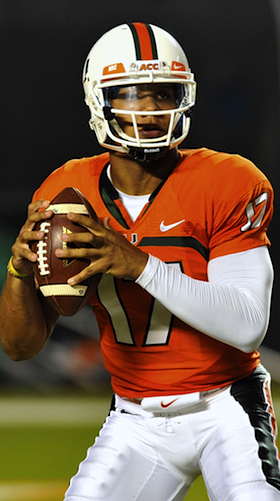 • Mitigating Factors. The ground game wasn't always much help, especially in the losses to Kansas State and Florida State, but it was certainly worth more than the defense: Twenty-four different defenders started at least one game last year in search of some shred of cohesion, which they never found. The result was a different starting lineup in every game, a musical chairs approach that left Miami ranked last in the ACC in rushing defense, pass defense and total defense, and 88th nationally in Defensive F/+. Opponents went over 30 points in six of eight conference games, and averaged 30 for the season for the first time since World War II.

All eleven defensive starters against FAU had previous starting experience, and all but one (sophomore cornerback Tracy Howard, a former five-star recruit) is an upperclassman in at least his third year in the program. Against Florida, they're going up against an offense that looked as bereft of firepower in its first game, a 24–6 win over Toledo, as it has for most of the past three years. Long-term, the jury is out.

• Verdict. The Canes get Florida at home, and an upset there would open up a path to a 7–0 start before they have to go to Florida State on Nov. 2. All of which is plausible. But nothing in Morris' or Miami's recent track record suggests they're up to a breakthrough against a first-rate defense on the order of Florida's – see above re: last year's struggles against the best defenses on the schedule – or to take advantage of it by embarking on a winning streak; the three-game run last September against Bethune-Cookman, Georgia Tech and N.C. State matched the U's longest since a five-game streak in 2008, and the '08 team finished 7–6.

That feels like ancient history, but in terms of the program's consistency and ongoing futility against top competition, the malaise goes even deeper: Since 2006, Miami is 4–19 against teams that finished in the final AP poll, and 0–6 under Al Golden. If this is the team that begins the climb out of that rut, Morris' growth into a more consistent, accurate passer will be the main reason. But we still have to see it to believe it.