Mike Riley's 2013 campaign didn't start out very well, but that doesn't dampen his overall coaching impact through the years.

Mike Riley is the kind of coach that this analysis really favors, and with good reason. Among programs in FBS AQ conferences there are few that could be argued are more disadvantaged than Oregon State’s (Washington State, Duke, Wake Forest and Kansas State and maybe a few others). Riley has to be Mr. Do-More-with-Less for Oregon State to even remain respectable, let alone finish a year nationally ranked, which the Beavers have in four of the last seven seasons.

What is probably most interesting is that the Riley’s success at Oregon State hasn’t been driven by any cutting edge offensive or defensive schemes. On offense the Beavers run a fairly standard one-back "pro style" scheme. On defense, they run an aggressive 4-3. Riley gets it done the "old fashioned" way. What his program is really all about is superior talent evaluation and strong player development.

The raw materials Oregon State has to work with aren’t generally considered great, or even very good. The bulk of Oregon State’s recruits over the past decade or so have been ranked two stars by Rivals and Scout. And the Beavers’ biggest impact players, as measured by NFL draft selections, have most often come out of nowhere in terms of recruiting evaluations. 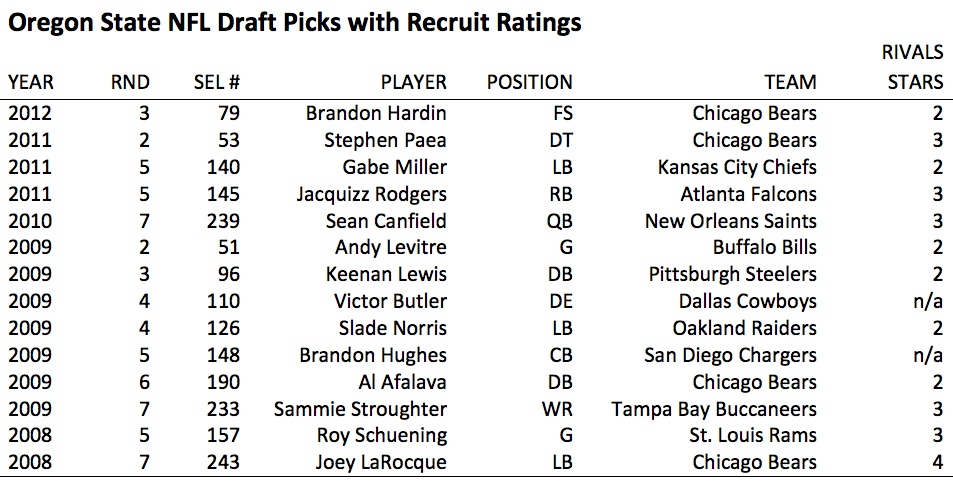 Building a consistent program in a place like Corvallis with players like this isn’t easy. And sometimes things go awry. The 2011 team was an example of that. A horrible run of injuries left the Beavers vulnerable to finding out what happens when development project players who aren’t quite ready yet have to carry the load. The results weren’t pretty.

In summary, I think Mike Riley is the kind of coach that makes college football fun. By all rights, he should probably be coaching someplace else, but he went to high school in Corvallis and clearly has a real affection for his hometown school, even though he played at Alabama. But he is happy where he is and continues to take overlooked players and mold them into solid, if rarely spectacular teams. And when your team of choice plays his, you should always feel good about coming away with a victory.

Prognosis: He’ll quietly keep doing this until he retires. Beaver fans should hope he stays vital and healthy well into his Golden Years (like the next guy on the list).