Life On the Margins, Week 4: Minnesota gets its grind on, and more of the weekend's weirdest box scores

Sometimes the final score tells you everything you need to know about how a game played out. Sometimes it doesn't. Each week Life On the Margins dissects close and closer-than-they-looked results, and why they didn't go the other way.

Share All sharing options for: Life On the Margins, Week 4: Minnesota gets its grind on, and more of the weekend's weirdest box scores 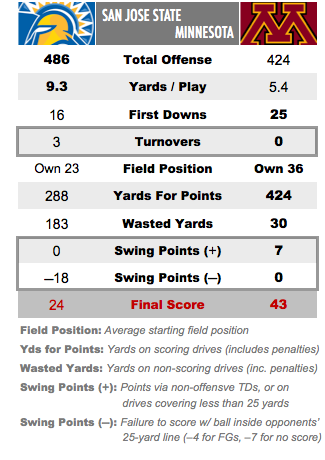 This was one of very few chances this year for a wide national audience to get a good look at San Jose quarterback David Fales, and he didn't disappoint: The Spartans connected on nine passes covering at least 20 yards, three of them touchdown strikes from Fales to his top receiver, Chandler Jones, who finished with a career-high 197 yards. Fales turned in the second-best day of his career in terms of yards (439), more than any quarterback against Minnesota since 2008. The stat that really jumps off the page is 9.3 yards per play, the kind of number that's usually reserved for the likes of Baylor and Oregon. That was almost four full yards better than the 5.4/play the defense allowed Minnesota.

How in the world do you lose by 19 points with a margin like that? As usual, turnovers played a central role, beginning with a failed 4th-and-1 try from the Minnesota 17-yard line in the first quarter; on the Spartans' next chance with the ball, Jones fumbled it away at the end of a long gain inside the 10-yard line, putting them in a two-touchdown hole in the "Swing Points" category just three possessions into the game. They dug themselves themselves a little deeper on their next possession by settling for a field goal from the thirteen. Later, Fales was picked off on his second pass of the second half, setting up the Gopher offense for an easy touchdown "drive" from 12 yards out. Altogether, that adds up to a 25-point swing.

With its secondary hanging on for dear life, though, Minnesota's offense deserves credit for playing the steady, methodical tortoise to San Jose's hair. The reason the difference in total offense is so much smaller than the per-play margin is because the Gophers ran so many more plays – 79 to just 52 for SJSU, the vast majority of them feeding a ground game that churned out 353 yards, six touchdowns and a 21-minute advantage in time of possession. That marks Minnesota's best rushing performance since it fired run-oriented coach Glen Mason in 2006, thanks in very large part to redshirt freshman quarterback Mitch Leidner, a big, Collin Klein-esque presence who accounted for 151 yards and four TDs in his first career start. As a passer, Leidner is a work in progress, which might keep him from fully overtaking sophomore Philip Nelson when Nelson returns from a sore hamstring. Clearly, though, if he manages anything resembling a repeat performance this week against Iowa, there is no need to rush. 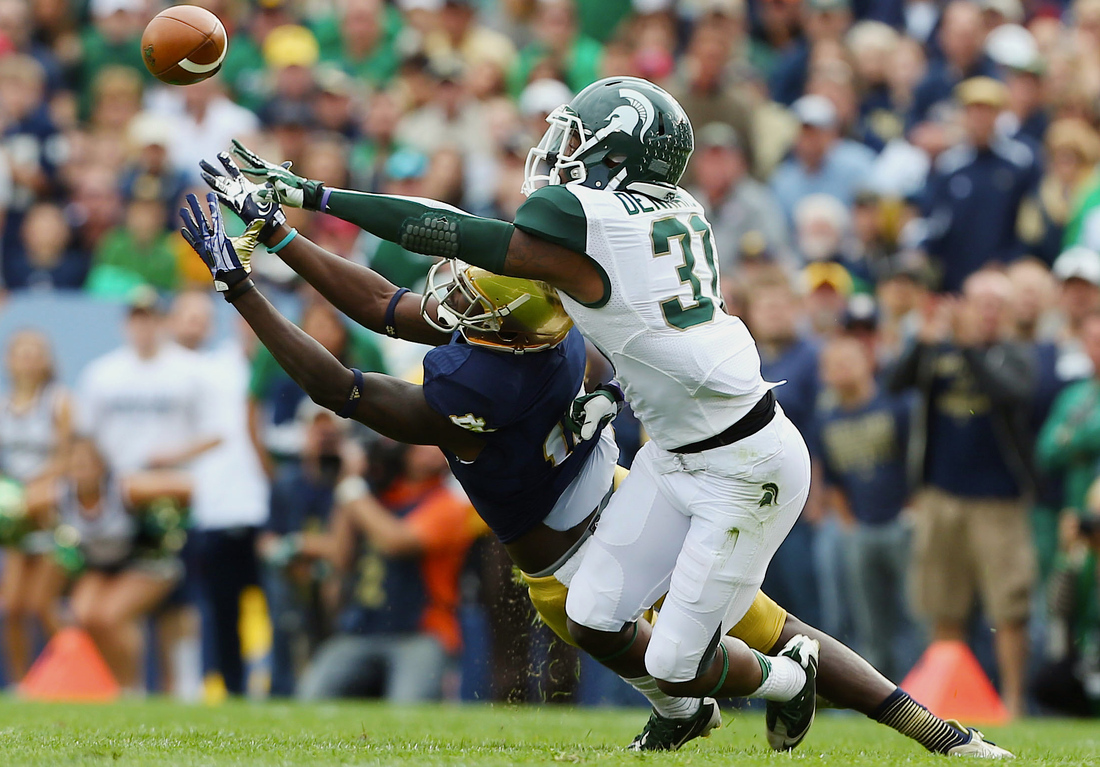 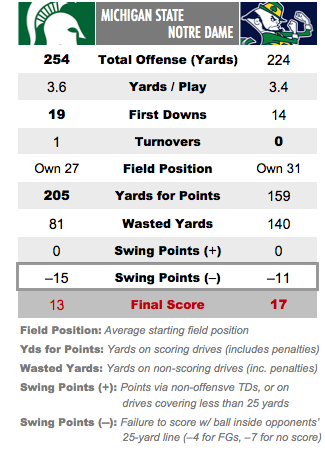 Is there anything to say about this game that doesn't somehow hinge on the controversial flags against Michigan State's defense? The Spartans were docked 115 yards on ten penalties, half them coming on pass interference and defensive holding calls that extended all three of Notre Dame's scoring drives and have subsequently been examined ad nauseum. I've written already (here and elsewhere) that one of those calls – a 3rd-and-10 flag on MSU cornerback Trae Waynes at the start of the fourth quarter, which came with the game tied 10–10 and set up the decisive touchdown – was pretty clearly bogus, although a couple of the others were just as clearly justified. (Another flag that immediately preceding the call against Waynes, which negating an end zone interception by Darqueze Dennard, was a no-brainer.) Either way, it's hard to envision a way Notre Dame gets to 17 points without them.

Still, there is very little room to complain about the misfortunes of the defense when the offense lets so many opportunities slip through its fingers. It's no surprise that the Spartans embraced a trench warfare approach to moving the ball (their longest gain of the day was 19 yards), but winning that way usually requires a little opportunism, too, which was sorely lacking here. On four trips inside the Irish 25-yard line, the offense settled for a pair of field goals, missed another and only punched it into the end zone once. Notre Dame left some points on the field, too, turning the ball over on downs and missing a field goal of its own in the first half, but at least when given the opportunity, it was able to finish the job. 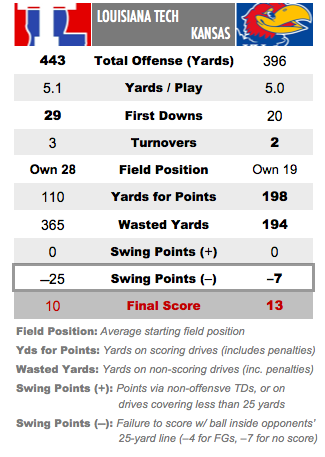 It doesn't take any deep forensic analysis to pinpoint where this one got away from Louisiana Tech: On two separate occasions in the fourth quarter, the Bulldogs lost fumbles with a game-clinching score literally within reach. The first gaffe came at the start of the quarter, Tech up 10–3 following a Kansas turnover, when freshman quarterback Ryan Higgins lost the ball out of the end zone at the end of a 29-yard run to the goal line; instead of going ahead by two touchdowns against a demoralized doormat, the Bulldogs turned the ball over on a touchback, then watched the previously hapless Jayhawk offense drive 80 yards to tie the score at 10–10. Undeterred, Tech responded with its longest drive of the day, an 80-yard march to the KU 5-yard line – where, in the midst of a conservative attempt to set up a go-ahead field goal, tailback Kenneth Dixon coughed up another critical fumble with 1:33 to play.

From there, Kansas' plans to run out the clock for overtime were thwarted by Louisiana Tech's overly generous run defense, which gave the Jayhawks just enough life to move into position for a game-winning, 52-yard bomb by kicker Matthew Wyman as the clock expired. It was Kansas' first win over an FBS opponent since September 2011, and it showed.

The Bulldogs missed some chances earlier in the game, too, missing a pair of field goals in the first half and launching three punts on Kansas' side of the field. But that's been a recurring theme in a 1–3 start, made all the more disappointing by how far the offense has fallen in the transition from Sonny Dykes to Skip Holtz. Last year, under Dykes, the Bulldogs led the nation in scoring at 51.5 points per game. This year, they rank 113th at 16.5 points per game, having scored a grand total of 39 in their three losses combined.