The table of data showing calculated Coaching Effects for each AQ team from 2006-12 generated a fair degree of discussion and interest. The data was arrayed in a Best to Worst sequence, by season, in terms of standardized deviations of Team Quality from what was expected based on Apparent Talent.

I wanted to take the time to look at the data from a more coaching-centric perspective and to try and bring some non-statistical observations and judgments to bear on the raw data. In this series, I will take a look at some of the coaches who have consistently generated very strong Coaching Effect scores over a number of years. First up, the Man at Oklahoma State.

Mike Gundy is a coach that I suspect some readers might not expect to find on this list. Until recently, Gundy was best known for his press conference rant in which he defended one of his players and challenged a local print reporter with the all-time great line: "Come after me! I’m a man! I’m 40!". At the time, that was the most interesting thing about Mike Gundy.

Through the first three years of his tenure (2005-07) at Oklahoma State, Gundy hadn’t done that much to really stand out. He was a young head coach whose teams were gradually improving, in keeping with the trajectory that could be expected of a middle-tier FBS program in a tough division of a top conference. That’s not to say he wasn’t doing a fine job, but it wasn’t anything remarkable.

But changes were happening behind the scenes in the way Gundy approached the job. Around the end of the 2007 season Gundy made the conscious decision to break with football coaching orthodoxy in a lot of ways and to embrace out-of-the-box thinking. According to Gundy, he and the OSU staff began questioning why and how they did everything and began collecting data on all sorts of seemingly banal facets of the program, in the hopes of improving the underlying processes. 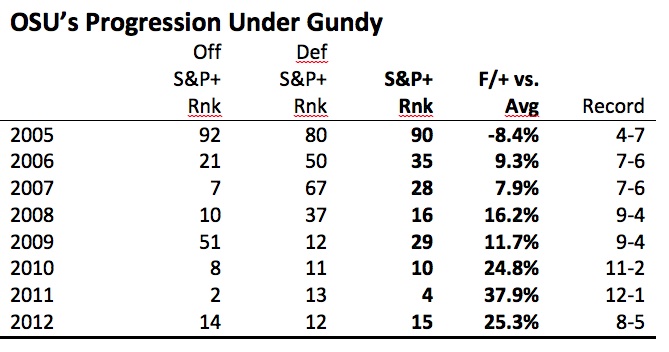 It might be tempting to be dismissive of those sort of claims as just so much PR spin, except that his decisions on coaching hires and the results on the field suggest that Gundy really was doing things differently. And those things were working.

After Larry Fedora left his OC position on the OSU staff to take over as the new head coach at Southern Mississippi, Gundy hired Dana Holgorsen away from Houston to bring his explosive brand of Air Raid football to Stillwater. Gundy has said he did so even though he had every expectation Holgorsen would be there only a short time; he thought it was worth the risk. The results certainly support that line of thinking. The Cowboy offense made a Quantum Leap (remember that show?) under Holgorsen’s direction in 2010.

Perhaps more impressively, the offense has basically sustained its level of lethality since Holgorsen left, despite the fact that the OC hired to replace him, Todd Monken, had never coached an Air Raid system before. Monken has now moved on to take over as the new head coach at Southern Miss and Gundy has been even less conventional in his approach to hiring his replacement, tabbing Mike Yurcich from Division II Shippensburg (Pa.)University for the task.

One recent decision of Gundy’s that has been disappointingly conventional was to push out DC Bill Young. Young had drawn a lot of criticism for fielding defenses that ranked poorly in terms of conventional defensive measures. But when viewed through the prism of advanced stats, which focus more on per play results, the defenses have been pretty good. They have simply been made to look bad by the pace of play.

Prognosis: Two new coordinators may take time to gel in the near-term, but Gundy should continue to do well over time.