Box Scorin', Week 3: In which Texas briefly resists, then succumbs to the void

Share All sharing options for: Box Scorin', Week 3: In which Texas briefly resists, then succumbs to the void

• After scoring on five consecutive possessions in the first half, Texas failed to score in the second half of a 44–23 loss to Ole Miss, generating four punts, a fumble and two turnovers on downs to close the debacle. The Longhorns were outscored 27–0 in the last two quarters, in which time they did not cross the Ole Miss 40-yard line.

• Central Florida finished with 507 yards of total offense in a 34–31 upset over Penn State, the first 500-yard game against the Nittany Lions in the regular season since 2001. (Houston dropped 600 on a lame-duck, post-Paterno outfit in the 2012 Ticket City Bowl.) The Knights scored touchdowns on three of their first four offensive possessions, on drives covering 89, 64 and 89 yards, and went 82 yards for a TD on their first possession of the second half.

Maryland, which coming into this season had not cracked 500 yards of total offense in a game since 2005, cleared the 500-yard barrier for the third week in a row in a 32–21 win over UConn. The vast majority of that production ran through quarterback C.J. Brown, who accounted for 399 yards (277 passing, 122 rushing), leaving him as the ACC leader in total offense by a wide margin.

• Auburn finished with 459 yards of total offense in a dramatic, 24–20 win over Mississippi State, nearly doubling its average against SEC opponents in 2012. Last year, the Tigers only cracked 300 yards once in conference play, putting up 321 in a 24–7 loss to Arkansas. Saturday, they exceeded that on the arm of quarterback Nick Marshall alone, which accounted for 339 yards – Auburn's first 300-yard passing game since Cam Newton went for 351 against South Carolina in the 2010 SEC Championship.

• Oregon racked up 458 yards against Tennessee in the first half alone, averaging 10.9 per play en route to a 38–7 lead after two quarters. For the game, Duck quarterback Marcus Mariota accounted for 483 total yards, a career high, and five touchdowns despite not taking a snap in the fourth quarter. The final score, 59–14, marked the Volunteers' most lopsided defeat since 1910.

• UCLA racked up 249 yards against Nebraska in the third quarter alone, scoring four touchdowns in a span of 22 plays to turn a 21–10 deficit at the half into a 41–21 rout. After the Cornhuskers scored their third and final touchdown in the second quarter, they were outgained 373 to 146 for the rest of the game.

• Washington finished with 615 yards – 342 passing, 273 rushing – in a 34–24 win over Illinois, exceeding its opening-day total against Boise State for the most yards by a Husky offense in a regular-season game this century. (It was still five yards shy of their balls-to-the-wall production against Baylor in the 2011 Alamo Bowl.) Tailback Bishop Sankey finished with career highs for carries (35) and yards (208), the tenth time in the last eleven games that he's logged at least 25 touches.

• In a stunning turn, Michigan State scored more offensive touchdowns in the first quarter (3) against Youngstown State that it had managed in its first two games combined, en route to a 55–17 rout. For the game, the Spartans finished with 547 yards of total offense – 277 rushing, 270 passing – most by MSU in any game since November 2009. Fifty-five points matches their previous high under Mark Dantonio, in his first game as head coach in 2007. 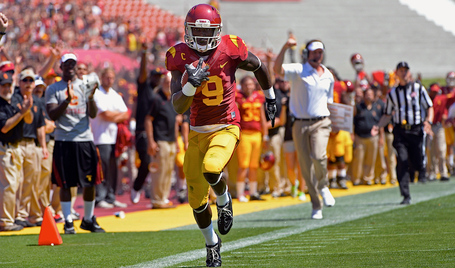 • A week after falling flat on its face against Washington State, USC generated 521 yards of total offense – 257 rushing, 264 passing – en route to a 35–7 win over Boston College. Quarterback Cody Kessler, who turned in a dismal 72.7 efficiency rating against the Cougars, rebounded to finish 15-of-17 for 237 yards and two touchdowns against B.C., good for an astronomical rating of 244.2.

• In a depressing second quarter in Ann Arbor, Michigan and Akron combined for three missed field goals, three interceptions, one fumble, one punt and zero points. For the game, the Akron offense crossed midfield into Wolverine territory eight times, and came away empty on six of them.

• With Braxton Miller on the bench, Ohio State finished with 608 yards of total offense in a 52–34 win over Cal, the Buckeyes' first time over 600 yards in a single game since hanging 645 on Eastern Michigan in September 2010. (The last time they cracked 600 against a "Big Six" BCS opponent was at the expense of Notre Dame in the 2006 Fiesta Bowl.) Well over half of the output in Berkeley came from the arm and/or legs of Miller's understudy, Kenny Guiton, who accounted for 368 with four touchdown passes in his first career start. 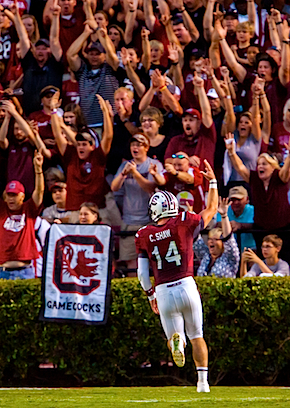 • With starting quarterback Brandon Allen out of the lineup for the last three quarters, Arkansas running backs Jonathan Williams and Alex Collins combined for 231 yards rushing in a 24–3 win over Southern Miss, making them the only teammates in the nation to go for 100 yards apiece in three consecutive weeks. With 115 yards against USM, Collins becomes the first freshman in SEC history to eclipse the century mark in each of his first three games.

• LSU scored on seven of its first eight offensive possessions against Kent State, and killed the clock on the ninth in a 45–13 blowout. The Tigers finished with 571 yards of total offense, their most against any opponent since 2007.

• Looking like its usual self, Georgia Tech ran 60 times for 344 yards in a 38–14 win over Duke, but didn't have a single back in the vicinity of 100 yards on his own. Ten different Yellow Jackets got in on the action, led by Robert Godhigh's 79 yards on just four carries, helping to amass a 17-minute advantage in time of possession.

• Looking like his usual self, Northern Illinois quarterback Jordan Lynch accounted for 159 yards rushing, 152 yards passing and five touchdowns in a 45–35 win over Idaho. As a team, NIU gashed the Vandals for 356 yards on the ground on 7.4 per carry.

• Looking like his usual self, so far, Florida State quarterback Jameis Winston was 15-of-18 passing with two touchdowns in FSU's 62–7 win over Nevada, giving him more touchdown passes (6) in his first two college starts than incomplete passes (5). 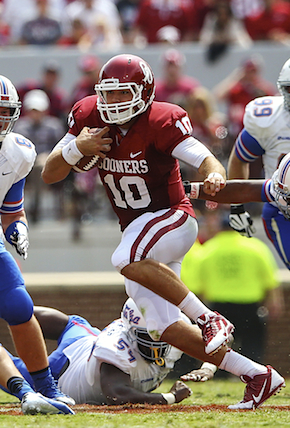 One week after being held to a single touchdown by West Virginia, Oklahoma scored six touchdowns in a 51–20 rout over Tulsa, ultimately coming away with points on nine of ten offensive possessions. In his first career start, quarterback Blake "Belldozer" Bell turned in a pass efficiency rating of 202.4, more than 100 points better than previous starter Trevor Knight in either of OU's first two games.

• Marshall outgained Ohio by margins of 147 total yards (482 to 335) and 2.7 yards per play (6.1 to 3.4), and still lost, 34–31. Despite the fireworks, the Thundering Herd finished minus-4 in turnover margin, including a fumble on a kickoff return that Ohio recovered for a touchdown.

• Between both offenses, Indiana and Bowling Green attempted nine fourth-down conversions, but only converted two – both by Bowling Green – in a 42-10 win for the Hoosiers. Although there were only three punts in the game, eleven other possessions ended without points courtesy of turnovers, turnovers on downs and missed field goals; despite 409 yards of total offense, the Falcons' only touchdown came on a return of a blocked punt.

• In possibly the most Ferentz-esque performance on record, Iowa tempted AIRBHG by running 60 times for 218 yards against Iowa State – an average of 3.6 yards per carry with a long gain of thirteen. Only 11 of those 60 carries resulted in a first down, but a 16-minute advantage in time of possession and a 27–21 final over the Cyclones was almost worth the monotony. Almost.