Deconstructing: Finding A.J. McCarron's comfort zone at Texas A&M (and keeping him in it)

When Alabama's offense is firing on all cylinders, it's because the defense is forced to pick its poison.

Share All sharing options for: Deconstructing: Finding A.J. McCarron's comfort zone at Texas A&M (and keeping him in it)

Earlier this week, one national writer labeled Alabama quarterback A.J. McCarron the "anti-Manziel," which (I think) he meant as a compliment: McCarron, the guy with a sprawling, indecipherable tattoo covering most of his torso, is regarded as a humble, salt-of-the-earth leader compared to his notoriously reckless counterpart, who (unlike McCarron) has yet to have his virtue validated by a championship. But it could have been taken in quite another context the last time these two teams saw each other. While Manziel was breaking big against the most vaunted defense in college football last November, McCarron was suffering through one of his worst games as a starter, beginning with an early interception that set up an A&M touchdown, and ending with an end zone pick that clinched the upset. Although he finished the afternoon with a career-high 309 yards and came within a few yards of a career-defining comeback, it came too late to dig the Tide out an early, 20–0 hole in their only loss of the season.

Understandably, the rematch between the most exciting, prolific offensive player in the game and the most disciplined, relentless defense in the game is a magnet for headlines and analysis ahead of the game of the year. Once the ball is kicked on Saturday, though, McCarron will at least as much to do with the outcome as the celebrated, scrutinized "Johnny Football," and at least as much to prove. 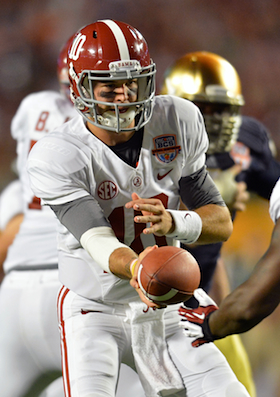 Because it boasts one of the few offensive lines capable of dominating the line of scrimmage on a consistent basis, against virtually any opponent, one of the misconceptions about Alabama's offense is that it's an old-school, cloud-of-dust affair that hasn't been updated since Ray Perkins ditched the wishbone. It is true that Bama runs a lot, relatively speaking: The only SEC team with a run–pass ratio more skewed toward the former in 2012 was Florida. And it runs well, finishing fourth nationally in Offensive Rushing S&P+ while producing two 1,000-yard rushers (Eddie Lacy and T.J. Yeldon) for the first time in school history. For the SEC title, the Tide mauled Georgia for 350 yards rushing on 6.9 per carry, the vast majority of it coming in a physically dominant second half; for the national crown, they followed up by parting Notre Dame's previously impenetrable front for 265 yards on 5.9 per carry. On the rare nights that Nick Saban allows himself to dream of offense, he still envisions a squad of alpha mashers seizing huge chunks of territory by sheer primal force. If they can, they will.

Contrary to its salt-of-the-earth reputation, though, at its best Alabama is really about exploiting its methodical M.O. to achieve balance. Through 12 regular season games last year – the offense's first under coordinator Doug Nussmeier – production was split virtually right down the middle between run (214 ypg) and pass (219 ypg), just as it had been in 2011. As good as the backs were, A.J. McCarron was every bit their equal with his arm, setting school records for yards (3,091) and touchdowns (31), and tying for third nationally at 9.3 yards per attempt. With only three interceptions, he finished as the most efficiency passer in the nation. Eventually, as we'll see below, coaches trusted McCarron enough to conduct the lion's share of the passing game out of shotgun/spread sets that all but abandoned any pretense of a ground game. (The thought of McCarron keeping the ball himself on a read option or veer is more frightening to Alabama than it is to opposing defenses.) But when it's firing on all cylinders – when it's really explosive, as it's more wont to be than it gets credit for – it's because the defense is forced to pick its poison.

The extreme example is the SEC Championship win over Georgia, which in some respects was Bama's most unbalanced, one-sided performance of the season. Beginning with 5:04 to play in the second quarter, five of the Crimson Tide's final seven possessions in that game resulted in points, via four touchdowns and a field goal. On those five possessions, they ran 25 plays for 303 yards. Of those 25 plays, 22 were carries by Lacy and Yeldon, for 243 yards – a little more than 80 percent of the total, on more than 11 yards per carry. For the game, Lacy and Yeldon combined for 334 and three touchdowns on 7.4 per carry, and Alabama amassed a 15-minute edge in time of possession. Still, with the clock winding down in the fourth quarter, and UGA clinging to a three-point lead by stacking the deck against the run, the return ticket to the BCS title game arrived by air:

That's one way to do it. A month later, though, the championship date with Notre Dame was closer to the platonic ideal, with Nussmeier and McCarron mixing up the run with play-action right out of the gate, and the Fighting Irish looking helpless to stop either. On the second snap of the game, facing eight in the box, McCarron faked left to Lacy, rolled right right and found Kevin Norwood open for 29 yards in the space between the corner and safety in the cover two…

…of a running theme…

…and you get the idea. Of the 28 passes that left McCarron's hand against Notre Dame, ten of them came out of play-action in base running sets – for Alabama, that means various one-back formations, with the rare short-yardage and pistol looks – of which he completed seven for 121 yards, six first downs (shaded below) and two touchdowns: 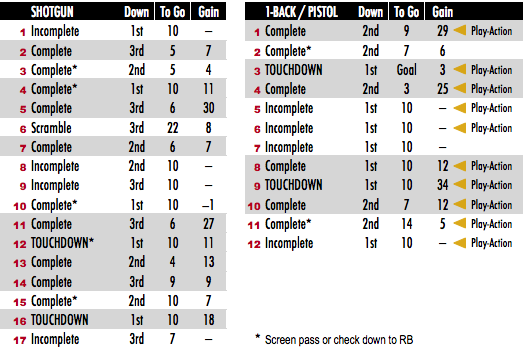 Against a previously savvy, disciplined secondary that had allowed fewer big plays through the air than any other defense in the nation in the regular season, Bama receivers found huge swathes of open field, with McCarron's top three targets alone (Norwood, Amari Cooper and Christion Jones) combining for 211 yards on just 11 receptions, or 19.2 per catch. Five of those grabs covered at least 25 yards. In their first 12 games, the Irish had allowed a grand total of eleven. In related news, against a front seven that had allowed two 100-yard rushers all season, Alabama produced two 100-yard rushers in a little over three quarters. When that happens – surprise! – your quarterback's comfort zone grows exponentially:

Notre Dame put its chips on stopping the run, was immediately burned by the pass and spent the rest of the night getting knocked so far back on its heels it had no chance of stopping anything. Once it was clear the Crimson Tide could run at will the basic premise for the Irish's presence in the game in the first place was rendered obsolete.

COUNTERPUNCH. Like every team that's beaten Alabama under Nick Saban – or even come remotely close – Texas A&M's upset last November began with the Aggies holding their own against the run: Excluding sacks, Bama finished with its lowest totals of the season in terms of both rushing yards (126) and rushing first downs (4). Instead, they turned almost immediately to airing it out, and kept right on throwing: 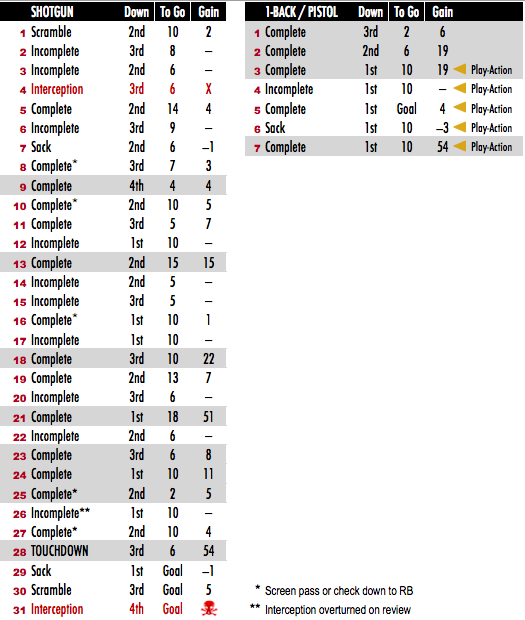 Some of the credit for that belongs to the Aggie offense, which exploded out of the blocks so quickly – three touchdowns on their first three possessions, good for a 20–0 lead by the end of the first quarter – that McCarron was forced to spend the rest of the afternoon in pursuit of the amazing Manziel. It wasn't until the truly desperate moments of the fourth quarter that he made much headway, finally connecting on a 54-yard stop-and-go route to Cooper (a preview of the game-winner against Georgia a month later) that cut A&M's lead to 29–24; that was quickly followed by a 54-yard play-action bomb to Kenny Bell on the next series that set up a first-and-goal for the would-be winning touchdown. By that point, though, running was out the window, and three subsequent shotgun passes from inside the A&M 10-yard line resulted in a sack, a wild scramble that came up short of the goal line and the upset-clinching interception on fourth down.

The fact that Alabama was even in that position is a testament to McCarron and especially to his receivers' ability to answer prayers even when the defense knows (or should know) what's coming. (They had just pulled a similarly improbable rabbit out of their hat a week earlier at LSU.) But the hole was as deep as it was come Hail-Mary time because A&M refused to allow Alabama to be Alabama for the first three-and-a-half quarters. Two of McCarron's three interceptions for the entire season came in that game, still the only multi-pick game of his career.

The season opener against Virginia Tech played out in reverse: The Crimson Tide jumped out to an early cushion courtesy of three first-half touchdowns by the defense and special teams, and the outcome was never in doubt. But the offense – and the passing game, in particular – was absolutely brutal over the final three quarters: 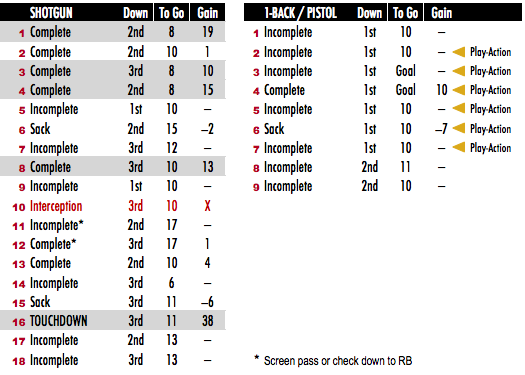 The down-and-distance on those throws tells us all we need to know about the effectiveness (or lack thereof) on the ground: Again, McCarron was consistently forced into second and third-and-long situations by the inability of the rebuilt offensive line to make a dent in the Hokies' veteran front seven on first down. When Nussmeier tried to mix it up on first down, Tech's complete lack of respect for Alabama's running game rendered the play-action game completely ineffective. Unlike Notre Dame, whose perimeter players were consistently frozen by play-action and usually reacted (much too late) by trying to drop into shallow coverage or chasing backs into the flat, Virginia Tech's edge defenders were less concerned with chasing the fake – the interior guys were handling that part well enough – than with keeping the heat on McCarron at all times.

Both of those hits came on 1st-and-ten. When the pass rush was able to tee off on obvious passing downs, the offensive line also visibly struggled with routine twists and loops, most notably on a second-quarter interception that McCarron forced off his back foot with two rushers in his face on 3rd-and-10:

For the night, Alabama finished with fewer total yards (206) against Virginia Tech than in any game since September 2009, and the hyper-efficient McCarron turned in the worst efficiency rating of his career (89.3) by a wide margin. After an early touchdown drive in the first quarter, which started in Tech territory, Alabama punted on eight of its last ten possessions with five three-and-outs – outside of the context of a huge first-half cushion, a potential disaster. Given Alabama's track reared, that's not the kind of performance any defense can expect to repeat, especially one with as many question marks of its own as Texas A&M's. But as they proved last year, if the defense is able to clamp down against the run early, keep McCarron in predictable passing situations and hang on down the stretch, Johnny Manziel may be all the cushion it needs.