College football teams are defined by the company they keep

A look at what you can learn about your team by the teams ranked around you.

Share All sharing options for: College football teams are defined by the company they keep

In many ways, we are defined by the company we keep. So is your college football team. I was having a conversation with a friend of mine who happens to be a fan of a rival school. He was struggling to come up with a program that my team was roughly equivalent to.

I thought it would be interesting to check out the "neighbors" for each team for each team covered in Fremeau's study. In other words, in each of the 5-year periods, what other programs were most similar to yours?

As an example, let's look at two teams. One on the rise, one on the decline (click on the images to make them bigger):

Now, on the decline: Cal. The Bears used their NFL talent in early to mid 2000s to rub elbows with Michigan, Clemson, and Wisconsin. Now, they downsized into a smaller home down the street from the likes of Iowa State and Temple.

Okay, I think you a) get it by now and b) are sick of my 'neighbor' references. Have some fun on your own. You can use this Google spreadsheet to find out who your team's neighbors are. Enjoy:*

*One quick note: I had to protect certain parts of the spreadsheet so that you don't accidentally disrupt the formulas. That is easy, but it makes your view look like this:

To remove the annoying gray lines, you must uncheck  View -> Protected Ranges. It should be that easy. 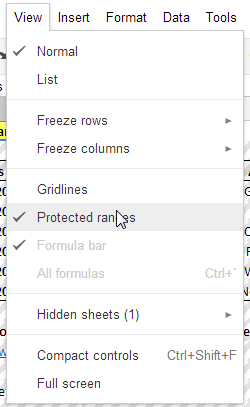