• LSU converted 13 of 19 third-down attempts in a 37–27 win over TCU, or 68.4 percent, its best rate on third down since November 2011. In fact, since the start of 2007, LSU has only finished above 68 percent on third down in three other games: Against Western Kentucky in 2011, Northwestern State in 2011 and Tulane in 2009 – never against an opponent from the SEC or another major conference.

In the second half alone, the Tigers converted six of seven third-down tries, including their final two touchdowns. Accordingly, they finished with a two-to-one edge in first downs (26 to 13) and a 12-minute advantage in time of possession.

• Boise State allowed 592 yards and failed to score a touchdown in a 38–6 loss at Washington, easily the Broncos' most lopsided defeat in eight years under coach Chris Petersen. Prior to Saturday, the Broncos hadn't gone down by double digits since a 2007 trip to Hawaii: The 32-point margin in Seattle was nearly three times greater than the margins in their last five losses combined. 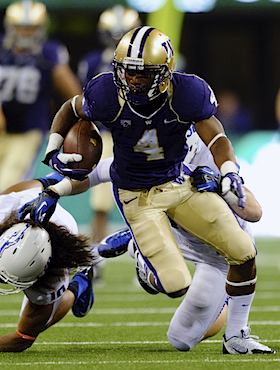 For Washington, 592 yards of total offense marks the Huskies' best regular-season performance this century, taking a backseat only to their no-holds-barred shootout with Baylor in the 2011 Alamo Bowl.

• Elsewhere in Pac-12–on–Mountain West violence, UCLA dropped 647 total yards (302 rushing, 345 passing) on Nevada in a 58–20 romp in the Rose Bowl, at one point scoring touchdowns on six consecutive offensive possessions in the second and third quarters. For the night, the Bruins were 9-of-12 on third-down conversions and did not punt.

• In its first game under a new play-caller, Major Applewhite, Texas set a school record for total offense in a blowout win over New Mexico State, splitting the total almost perfectly between rushing (356 yards) and passing (359) in less than 24 minutes of possession time. After turning the ball over on four of their first five possessions, the Longhorns' next five possessions all resulted in touchdowns, on plays covering 54, 66, 24, 55 and 74 yards, respectively – and all in a span of 16 snaps.

• Oregon ran 71 plays for 772 yards and 66 points with less than 20 minutes in time of possession in a blowout win over Nicholls State. (Stop for a second and read that sentence again.) That comes out to 3.6 plays, 39 yards and 3.3 points per minute with the ball.

• Oklahoma State finished with 146 yards passing on 33 attempts in a 21–3 win over Mississippi State, the first time the Cowboys have failed to throw for at least 200 yards since 2009. After averaging well over 300 yards per game through the air from 2010-12, OSU racked up nearly twice as many yards Saturday on the ground – 286 rushing to 146 passing – led by 125 from quarterback J.W. Walsh.

• With a 72-yard punt return by Christion Jones, a 1-yard run by T.J. Yeldon and a -yard interception return by Vinnie Sunseri, Alabama scored touchdowns on offense, defense and special teams in the first 16 minutes of the season.

• With a 77-yard touchdown run by Trey Edmunds, Virginia Tech racked up more rushing yards on a single play than Alabama allowed per game in 2011 (72.2) or 2012 (76.4). The longest run against the Crimson Tide last year covered 32 yards, courtesy of Johnny Manziel.

• In the same game, senior quarterbacks A.J. McCarron and Logan Thomas – both making their 28th career start – both finished with the worst pass efficiency rating of their careers by a wide margin. McCarron, the most efficient passer in the nation as a junior, finished with a rating of 89.3, more than 26 points below his worst performance in 2012; with a 30.6, Thomas exits the opener as the least efficient quarterback in the nation. (We'll see how long that lasts against defenses that are not Alabama or Virginia Tech.) 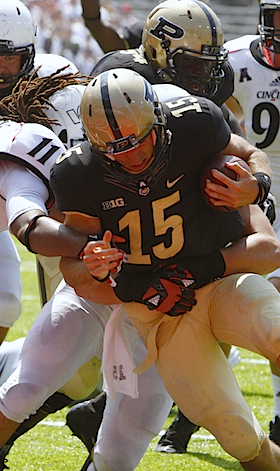 Eight of Purdue's eleven offensive possessions against Cincinnati ended in a turnover, turnover on downs or three-and-out, including all six possessions in the second half of a 42–7 debacle. The Boilermakers' only points were the result of a muffed punt that set up the offense at the Bearcats' 11-yard line.

• Tommy Rees passed for 346 yards and three touchdowns with no interceptions in a 28–6 win over Temple, leaving him with the best pass efficiency rating of the Brian Kelly era at Notre Dame. The last Irish quarterback to post a rating above 200 was Jimmy Clausen in the last game of the Charlie Weis era, a loss at Stanford.

• South Florida scored on its first play from scrimmage under coach Willie Taggart, an 80-yard touchdown run by Marcus Shaw, and proceeded to allow 40 consecutive points to McNeese State in a 53–21 humiliation. Sparked by a safety at the end of the first quarter, McNeese scored on each of its final eight offensive possessions, and added an interception return for a touchdown at the end of the first half for good measure.

• Wyoming quarterback Brett Smith passed for a career-high 383 yards and four touchdowns in a 37–34 loss at Nebraska, leading the Cowboys to 602 total yards and 35 first downs in the near-upset. For the game, Wyoming averaged 8.1 yards per play, the third consecutive opponent dating back to 2012 to go over 8.0 against the "Blackshirts."

• In his first career start, Oklahoma freshman Trevor Knight completed just 11 of 28 passes for 86 yards in the Sooners' win over UL-Monroe, and didn't complete a pass longer than 18 yards. (He did, however, connect on three touchdown passes, and added 103 yards rushing.) Between Knight and backup Blake Bell, Oklahoma finished with fewer yards through the air (124) than in any game since a September 2007 loss at Colorado.

• Making his first career start, Cal freshman Jared Goff put the ball in the air 63 times for 445 yards in the Golden Bears' loss to Northwestern, connecting on a pair of touchdown passes in the third quarter but also falling victim to three second-half interceptions. Two of those picks were returned for touchdowns by Wildcat linebacker Collin Ellis, supplying the margin in a 44–30 decision.

• Eastern Washington and Oregon State combined for 95 points and 1,152 yards of total offense in the Eagles' 49–46 upset in Corvallis, 833 of those yards coming from the arms of quarterbacks Vernon Adams and Sean Mannion. Adams added 107 yards rushing to his big passing day, which would make him the early FBS leader in total offense if Eastern Washington was an FBS team.

• Northern Iowa tailback David Johnson accounted for 240 total yards and all four of his team's touchdowns at Iowa State, including a clinching score in the fourth quarter that supplied the margin in a 28–20 upset. The other three came on the Panthers' first three possessions, capping drives of 69, 78 and 82 yards. 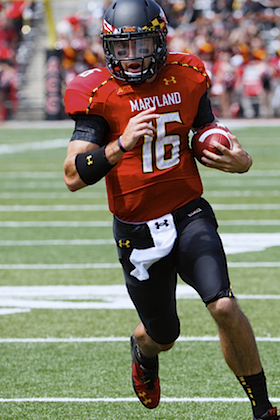 Maryland outgained Florida International by 405 yards en route to a 43–10 blowout, more yards in the margin alone than the Terrapins gained in all but one game in 2012. Quarterback C.J. Brown, coming off a torn ACL that cost him all of last season, accounted for 386 total yards and five touchdowns.

• Between them, the offenses in Penn State's win over Syracuse averaged 1.7 yards per carry, finished 7-of-36 on third-down conversions and committed seven turnovers. On the other hand, Nittany Lion freshman Christian Hackenberg countered his two interceptions by connecting on two touchdown passes in the second half covering 51 and 54 yards.

• As a team, Georgia Tech rushed for 370 yards and six touchdowns on 49 carries in a 70–0 obliteration of Elon, although no individual Tech player had more than seven carries or 53 yards on his own. Thirteen different Yellow Jacket backs got in on the rout, combining to average 7.4 yards per carry.

• After leading the nation in total and scoring offense in 2012, Louisiana Tech went three-and-out on eight of 13 possessions against N.C. State, also losing four fumbles in a 40–14 loss. Despite losing starting quarterback Brandon Mitchell to a broken foot, the Wolfpack racked up 542 yards of total offense and held the ball for nearly 41 minutes.

• In 13 offensive possessions against Wofford, Baylor scored eight touchdowns, kicked two field goals and punted just once in a 69–3 embarrassment.

• Arkansas produced two 100-yard rushers in Bret Bielema's first game as head coach, a 34–14 win over UL-Lafayette, the first time the Razorbacks have had two back over the century mark in the same game since Darren McFadden and Felix Jones occupied the same backfield in 2007. Sophomore Jonathan Williams and freshman Alex Collins combined for 282 yards on 7.2 per carry, but only one touchdown, a 75-yard run by Williams to close out the scoring.

• Iowa racked up 458 yards of total offense against Northern Ilinois, the Hawkeyes' best number in that category since September 2011, but also turned the ball over three times in a last-second, 30–27 loss. After putting up 24 points in the first half, Iowa managed just three in the second, suffering through an all-too-familiar run of three 3-and-outs and two interceptions after halftime.