The last word on the most pressing themes for the 2013 season. Today: Does it matter who starts at quarterback for Notre Dame?

Share All sharing options for: Final Takes: Onwards and Upwards with Tommy Rees

Previously in this series: Quantifying the Clowney Curve" … Another year, another chance for the Longhorn Leap … Making sense of Taylor Martinez.
– – –

How much did Everett Golson mean to Notre Dame in 2013? As usual, leave it to Las Vegas to calculate the answer precisely. Within hours of Golson's suspension from the university in May for "poor academic judgment," sports books had downgraded the Irish's chances of winning the BCS championship by as much as 75 percent, exiling them from a small handful of plausible contenders to the ranks of hopeful but distant wannabes. If the best Notre Dame outfit in two decades wasn't quite up to the biggest stage in the sport last year with Golson as the controls, how much better could the Irish possibly be without him?

True, the same question would follow the abrupt departure of the starting quarterback at any program in the country, with the same accompanying skepticism, even at a place like, say, Alabama or Oregon, where the system operates with such machine-like consistency that the specific identity of the guy taking snaps hasn't seemed to matter in years. In Notre Dame's case, though, the question takes on a slightly different tone than it would in other circumstances, if Golson's absence meant the keys to the offense were about to handed over to an unfamiliar, unproven face with no relevant experience – someone, for example, like Golson himself before last season, when he won the job in preseason camp as a redshirt freshman. On the contrary: Fans and oddsmakers have seen more than enough of Golson's successor, Tommy Rees, who also happens to have been Golson's predecessor. And none of them are betting the pool house on Tommy Rees.

In fact, at the same point on the calendar last year, Rees' stock had fallen so low that many fans were quietly relieved that he had been outplayed by Golson in spring practice, and hardly apoplectic about the effect on the team when Rees was arrested (and subsequently suspended) for allegedly fleeing police while intoxicated at a party. There was no wringing of hands when he was officially demoted to second-string before the season opener. The offense was past due for a change: By the end of Rees' first full season as a starter in 2011, the Irish were running on fumes, managing just 16 points in a too-close-for-comfort win over Boston College and just 14 in losses to Stanford and Florida State. Even those modest numbers were inflated by a garbage time touchdown against the Cardinal and a defensive score against the Seminoles.

In both games, Rees was benched in the second half, to give backup Andrew Hendrix the chance to take the job away from him. When Golson finally did, well, an undefeated run to the BCS Championship Game speaks for itself. Doesn't it? 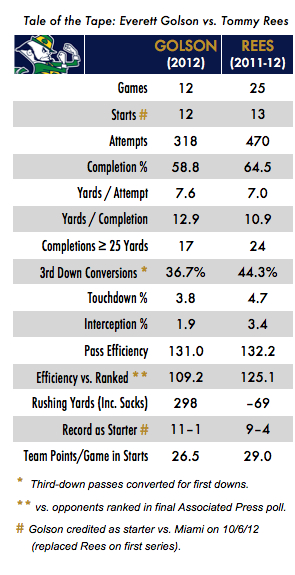 Limiting the comparison to the final record risks overstating the point in both directions. On paper, the margin between Golson's production last year as a redshirt freshman and Rees' production over the past two years is negligible, and in some ways favors the latter. As a passer, Rees has a significantly higher completion rate (64.5 percent to Golson's 58.8), touchdown rate (4.9 percent to Golson's 3.8) and third-down conversion rate (44.3 percent to Golson's 36.7). They're virtually identical in terms of efficiency, with Rees turning in a 132.2 rating to Golson's 131.0, although the gap widens slightly in Rees' favor in games against ranked teams. In the thirteen games Rees started in 2011-12 – including last year's 17-14 win over BYU in South Bend, with Golson sitting out due to a concussion – Notre Dame averaged 29 points, nearly a field goal more than the 26.5 points it averaged in Golson's starts.

And even when he wasn't the first option, on several occasions in 2012 it was Rees to the rescue, coming off the bench to lead game-winning drives against both Purdue and Stanford, as well as the only touchdown drive in a 13-6 win over Michigan. (Golson was yanked against the Wolverines after throwing two interceptions less than halfway through the second quarter.) Although Golson was in every meaningful sense the starting quarterback, it was well into November – when Golson brought the Irish from 14 points down in the fourth quarter of a season-defining, triple-overtime win over Pittsburgh – before Rees stopped making regular cameos in crucial situations. To that point, he had largely delivered.

That's the good news – good enough, at least, to stave off some of the initial panic that followed word of Golson's suspension. But that's not to suggest that the position was really a collaborative effort, or that it doesn't stand to lose something in the transition. Specifically, Golson added value in three distinct ways that Rees, based on what we've seen from him so far, does not:

Versatility. From a scouting perspective, the most glaring physical difference between Golson and Rees is the threat the former poses as a runner, which opens up the offense in a couple of ways. One way is by design: Although Brian Kelly's scheme has never demanded a great athlete in the role, and the Irish still put the ball in the air nearly 30 times per game last year, given the option he is willing to involve the quarterback as a runner if the quarterback is up to it. Golson was, tacking on 415 yards rushing (before sacks) and a team-high six touchdowns, all of them coming from less than ten yards out. Add to that the attention defenses have to pay to Golson as a threat to run, even when he doesn't, and it amounts to a sizable advantage over a statuesque type like Rees. 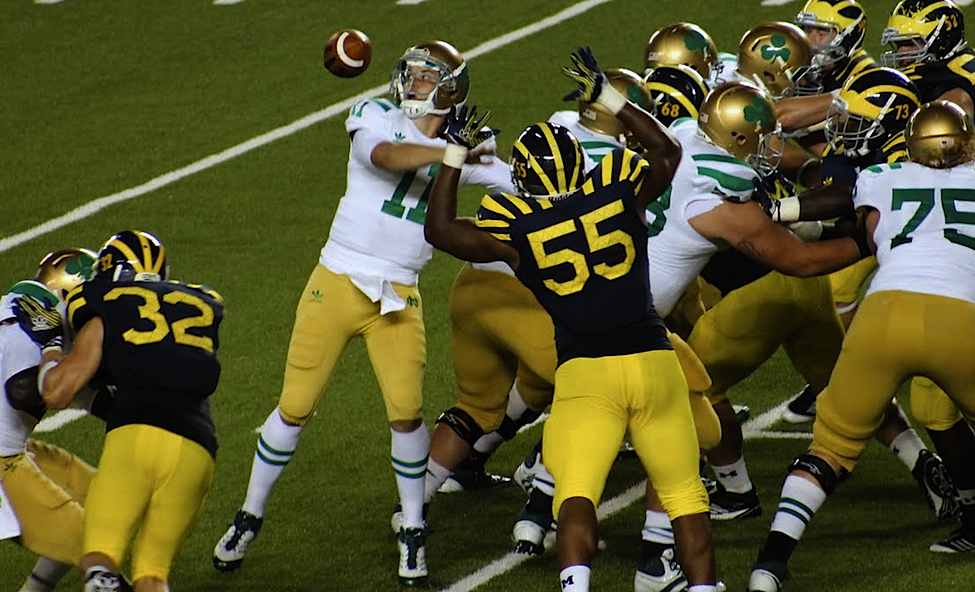 Ball Security. First, do no harm. The black mark against Rees throughout his tenure as the starter was his penchant for giving the ball away, which he did both too often – 14 interceptions, five lost fumbles in 2011 alone – and at especially inopportune moments. For many, the defining moment of Rees' career to date remains an infamous fourth quarter fumble against Michigan in September 2011, when the ball slipped untouched out of his hand as he attempted a pass inside the Wolverine red zone; the gaffe likely cost the Irish a decisive score in a game they'd dominated for three quarters and went on to lose in gut-wrenching fashion. (Tellingly, far fewer fans seem to give Rees credit for rebounding with a go-ahead touchdown pass in the same game with less than a minute to play, only to watch the defense melt down in the final seconds.) Altogether, Notre Dame went on to commit 29 turnovers that season, and finished in the red in overall turnover margin all five losses.

With Golson taking the vast majority of snaps last year, the Irish turned the ball over just 15 times, and finished in the red just twice in the regular season – both of which, against Stanford and Pittsburgh, were settled in dramatic fashion in overtime. If he didn't always know what to do with the ball, he consistently knew what not to do, which qualifies as a major asset opposite a defense that at one point held opposing offenses out of the end zone in 18 consecutive quarters. 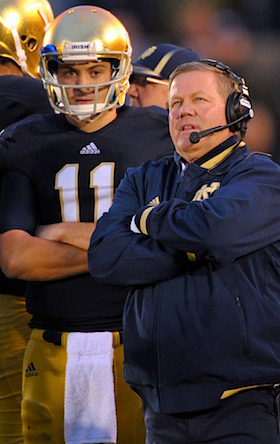 Which brings us to the most fundamental, tangible difference between the last two seasons, and arguably the most relevant for 2013 regardless of who's in the offensive huddle: Unlike Rees in 2011, Golson was backed last year by one of the most formidable defenses in the nation, one that kept him from facing high-risk, must-throw situations. Ten times the Irish scored the game's first touchdown, and never trailed again in nine of them.

If Rees is capable of being boring, and the defense is able to pick up where it left off last November, as the No. 1 scoring D in the nation, there is one recent, relevant precedent for making the prodigal quarterback work according to that blueprint: The 2011 LSU Tigers. Just a few weeks before its season opener against Oregon, LSU lost its starting quarterback, senior Jordan Jefferson, to a felony arrest, forcing fellow senior Jarrett Lee back into the lineup after two seasons spent almost entirely on the bench. As a redshirt freshman in 2008, Lee had served up 16 interceptions, six of which had been returned for touchdowns, and yielded the job to Jefferson at the end of the season. As a senior, though, Lee finished the regular season as the most efficient passer in the SEC, at the helm of an attack that thrived on a) Capitalizing on consistently excellent field position, thanks to the knee-capping Tiger defense; and b) Taking care of the ball. Despite a general absence of offensive fireworks, LSU led the nation in the regular season with a miserly eight giveaways, averaged more than 38 points per game and ran roughshod over the rest of the conference en route to the BCS title game.

Once there, of course, the Tigers were throttled by Alabama – an outfit they'd defeated in the regular season – in familiar fashion, after Lee had largely yielded the reins back to Jefferson down the stretch. Golson will not be back this season, if ever. (He is working on it.) Barring catastrophe, the 2013 Irish are Rees' team from start to finish. But there was little doubt before that their fate hinged on the defense making the quarterback's life as easy as possible, and vice versa. With Golson or Rees, this was not and is not an offense that can consistently put up 30 points against sentient competition. If nothing else, though, a well-seasoned senior should be able to hold up his end of that bargain.

– – –
This post is adapted from article that originally appeared in Lindy's Sports' "Fighting Irish In the Huddle" 2013 Preview.