Morning Bell: West Virginia's got backs. Does it know how to use them?

Share All sharing options for: Morning Bell: West Virginia's got backs. Does it know how to use them?

• BLASPHEMY! Dana Holgorsen's reputation as a pass-happy, caution-to-the-wind bomber has deep roots. Although he doesn't call for his offenses to put the ball in the air as often as his "Air Raid" mentor, Mike Leach, Holgorsen's attacks at Houston, Oklahoma State and West Virginia have still averaged upwards of 40 passes per game in every season since 2008, ranking in the top ten nationally in passing yards all five years. In the 54 games Holgo has called in that span, passing yards have outpaced rushing yards in 49 of them. 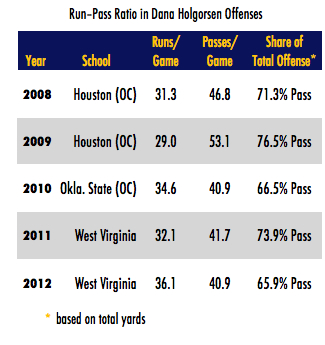 But there's a chicken-and-egg aspect to that trend, too: Did Holgorsen's philosophy mold quarterbacks Case Keenum, Brandon Weeden and Geno Smith into the most prolific passers in their respective schools' histories, or did the presence of three obviously gifted, veteran passers play a role in molding Holgorsen's philosophy? The local Charleston Gazette is at least willing to entertain the latter, suggesting over the weekend that the gaping void in the Mountaineers' passing game, combined with a sudden glut of viable options in the backfield, might force a greater emphasis on the ground game. Wishful thinking from an old-school hack? Maybe. In the paper's defense, though, the shift was already underway last November, in unusually run-oriented turns against Oklahoma, Iowa State and Kansas, and not only due to the increased role of Tavon Austin as all-purpose dynamite – full-time tailbacks Andrew Buie and Shawn Alston each churned out a 100-yard game in that stretch, too. Currently, Buie (WVU's leading rusher in 2012) is sharing the backfield with Dustin Garrison (the leading rusher in 2011), transfer Charles Sims (a two-time All-Conference-USA pick at Houston) and exceptionally named juco transfer Dreamius Smith, brought in early for immediate help in the spring.

All we know about the quarterbacks right now is that neither Paul Millard nor Clint Trickett projects as the next Geno Smith. Which is significantly more than we know about the receivers. Of the 19 offensive players listed on the latest depth chart, only five have started a game at WVU, and ten have never set foot on the field.

For his part, offensive coordinator Shannon Dawson did not dismiss the notion of leaning more heavily on the running backs outright:

"The offense doesn't change. What changes is the makeup of the team, the pieces,'' said Dawson … "So the focus of the offense might change."
[…]
"There were times last year when we went into games banged up and maybe had just one really healthy running back. So at times we would go empty a lot," Dawson said, meaning no backs in the backfield. "We didn't run any different plays, we just ran them out of different personnel sets because that's who was healthy. So the focus is going to change because of the personnel we have. The pieces to the puzzle are different.

"Now, if you have a lot of running backs that are capable, you want to get those guys the ball in every way possible, as much as possible. You get the ball to your best players and if [the running backs] end up being the best players we're going to get them the ball."

Most likely translation: The running backs are going to catch a lot of passes. For Sims, that's old hat; he comes with 158 career receptions in a near-identical system at Houston, including 70 as a true freshman with Holgorsen calling plays in 2009. Buie and Garrison have combined for 74 catches over the last two years. Smith has drawn specific praise for his hands. And there is an immediate opening for new targets on the endless screens and horizontal routes that went Austin's way in 2011-12. It may take six guys to replace such a dynamic, versatile talent, but West Virginia has them. 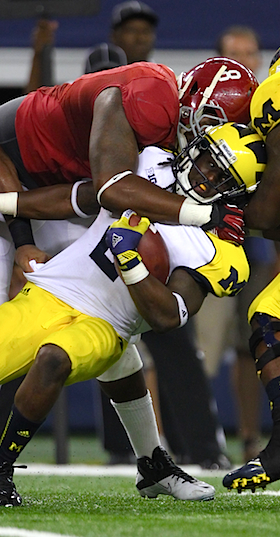 • A DEATH FORETOLD. To no one's surprise, Vegas has installed Alabama as roughly a 19-point favorite over Virginia Tech in Saturday's opener, which happens to be the largest spread the Hokies have faced in more than 20 years. (Depending on where you look, Bama is currently getting anywhere from 18 to 20.5 points.) The last time Tech went into a game as a 19-point underdog was at No. 1 Miami on Oct. 24, 1992. The Hurricanes barely covered, winning 43-23.

So, yeah – surprise! – the oddsmakers can read a script. Three times since 2008 the Crimson Tide have opened against a name-brand opponent at a neutral site, and three times they've dropped the hammer, bludgeoning Clemson by 28 points in 2008, Virginia Tech by 10 points in 2009 and Michigan by 27 points last year in Cowboys Stadium, none of which was remotely as close as the final score. Of the three, Tech fared the best, actually leading Bama through three quarters, 17–16, before succumbing to its overwhelming depth in the fourth. Even in an ostensibly competitive effort, though, the Hokies were outgained by 343 yards. In the meantime, Alabama has won three BCS titles and welcomed four more top-ranked recruiting classes.

It doesn't help that the Hokies have been hit by a wave of preseason attrition, which has claimed veterans with starting experience at tailback and defensive end and forced a true freshman into the starting five on the offensive line. Where Saturday is concerned, though, getting into the specifics feels like an exercise in limiting the splat.

• YOU'RE UP, KID. As expected, Tennessee's new starting quarterback is junior Justin Worley, whose dismal track record to date (one touchdown to five interceptions in 110 career attempts) is an unfair gauge of future returns. As a true freshman in 2011, Worley was thrown to the wolves against Alabama, South Carolina and Arkansas while starter Tyler Bray nursed a broken hand; last year, he was limited strictly to garbage time. But Worley was a relatively pedestrian recruit, earning three stars from the scouts, and hasn't given any indication that he's the second coming of… hell, at this point Vol fans would settle for the second coming of Erik Ainge. Despite solid numbers overall, Bray's efficiency last year against winning teams was a meh 118.0. His successor can't match his arm, but better decision-making can more than make up the difference. 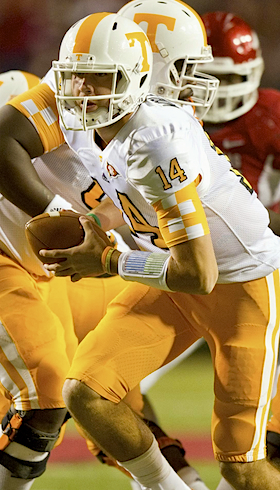 Still, Worley's prospects as the full-time starter are not much brighter than they were off the bench, for reasons entirely outside of his control. The biggest obstacle, beyond the absence of an established playmaker at the skill positions, is still the schedule: Once again, Tennessee has to play at Oregon, at Florida and at Alabama with visits from Georgia and South Carolina before Halloween. (The "soft" portion of the conference schedule is a November run against Missouri, Auburn and Vanderbilt.) The offensive line is as experienced as they come, but no level of grizzle can keep the growing pains at bay under those circumstances.

• CLONE WARS. In other quarterbacking news, Lane Kiffin is sticking to his assessment that there is no separation in the ongoing duel between sophomores Max Wittek and Cody Kessler, and said over the weekend that he expects both to play Thursday in USC's opener at Hawaii. Besides the fact that Wittek picked up significant game experience last winter in place of Matt Barkley – not necessarily a mark in his favor, given his underwhelming turn in losses to Notre Dame and Georgia Tech – Wittek and Kessler are pretty much the same guy: Both were highly touted, four-star prospects in Kiffin's first full recruiting class in 2011, and both project as statuesque, "pro style" pocket slingers in the mold of every other Trojan quarterback from time immemorial. As we pointed out last week with regard to Oklahoma State, for teams with BCS ambitions, there is no precedent for a functional two-quarterback system since Florida juggled its way into big-money games in 1998 and 2000. For the time being, though, the more pressing question is who's going to handle the blocking.

Quickly… Already down one starting safety against Clemson, Georgia may have to scratch Tray Matthews from the starting lineup, as well. … Five-star tailback Thomas Tyner is not going to redshirt at Oregon. … Texas A&M announces suspensions for two starting defensive backs in the Aggies' opener against Rice. … Meanwhile, Johnny Manziel signs autographs in broad daylight. … Bo Wallace has too much moxie to worry about minor details like leading the nation in interceptions. … You can't coach speed, unless you coach for Boise State. … David Shaw likes the idea of moving next year's Cal-Stanford game to the 49ers' new stadium in Santa Clara. … Cal's opener against Northwestern dredges up some ancient bitching about the refs in the 1949 Rose Bowl. … Mark Helfrich responds to critics of the hurry-up offense. … And despite having never faced an SEC defense, an Oklahoma State lineman questions the stamina of his SEC counterparts with no foreseeable repercussions whatsoever.