• TWO-STEPPIN'. Last year, Oklahoma State used three quarterbacks out of necessity. This year, the Cowboys will start out using two quarterbacks by choice, confirming Thursday that senior Clint Chelf and sophomore J.W. Walsh will share the starting job in the Cowboys' opener against Mississippi State, and continue their preseason competition into the season. There was very little difference between the two in 2012, with Walsh turning in a higher efficiency rating before a midseason knee injury but Chelf subsequently winning over the peanut gallery down the stretch. (OSU averaged 50.8 points in his five starts, on 6.6 yards per snap; late losses to Oklahoma and Baylor are entirely on the defense.) In the spring, it appeared to be Chelf's job to lose. But Walsh is a former top-100 recruit in his own right who adds significant value with his legs, and will have every opportunity to prove that his arm – and his brain – is up to the task.

And that's… okay? The historical record on alternating QBs is mixed, at best, and tends to side with the classic adage, "If you have two quarterbacks, you really have none." Since 1998, i.e. the "BCS era," nine teams have punched their ticket to big-money bowls with two quarterbacks who attempted more than 100 passes apiece in the same season.* But only four of those have come since 2002, and none of them are reassuring: 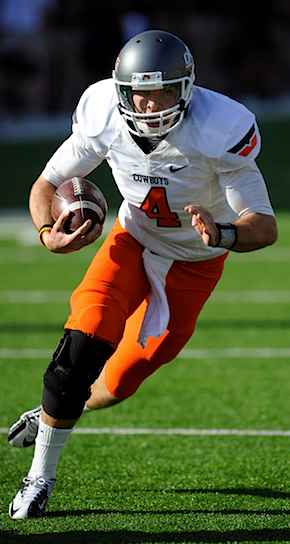 Cincinnati and Stanford were not platoons: Pike took every significant snap for the Bearcats in 2009 prior to a midseason injury, at which point Collaros filled in for a few weeks until Pike was ready to resume the job full-time. (Which he did, returning to take every significant snap.) And Nunes was flat out benched last year in favor of Hogan, who had barely seen the field over the first two months of the season but validated the decision by going 5–0 as a starter with wins at Oregon, in the Pac-12 Championship Game and the Rose Bowl. To the extent that Glennon and Taylor's "Odd Couple" routine represented a platoon at Virginia Tech, it was an ad hoc arrangement bound for obscurity opposite any other defense.

The most heartening precedent for Oklahoma State fans is probably Florida in 1998, when Steve Spurrier juggled starter Doug Johnson and backup Jesse Palmer en route to the Orange Bowl, and again in 2000, when the Gators claimed the SEC championship behind Palmer and Rex Grossman. Even in those cases, though, injuries played a factor. Mike Gundy has a little Ball Coach in him – he says he feels "obligated" to give Walsh and Chelf equal time – but the best guess is still that if OSU is where it wants to be in December, it's by virtue of one of them separating himself from the other.

(* No, Michigan in 1999 is not one of them. Contrary to urban legend, Tom Brady was the unequivocal starter during the Wolverines' Orange Bowl run.)

• NO PRESSURE, KID. Oklahoma will be rotating two quarterbacks this season, too, although under slightly different circumstances: With the starting nod going Thursday to a surprise challenger, Trevor Knight, presumptive starter Blake "Belldozer" Bell has been officially relegated to the short-yardage Tebow role he performed last year to great fanfare. Then, Bell's appearances were regarded in part as trial runs in preparation for taking the reins from Landry Jones, adding a sense of anticipation to the inherent novelty of a colossus whose only job is to score touchdowns. Now, when he takes the field it will be as a familiar vet who let his big chance slip through his fingers.

Although Bell was considered a lock for the job at the start of spring practice, Knight is not exactly coming from nowhere: He was a solid four-star recruit in 2012 and has drawn consistently rave reviews for his athleticism. (Stoops' last two quarterbacks, Jones and Sam Bradford, both started as redshirt freshmen and went to demolish every OU passing record.) As a scrambly redshirt freshman who unexpectedly surged past an older contender on the depth chart, he's also drawn explicit comparisons to Jonathan "Football" Manziel before taking his first snap. I don't see any way that could possibly come back to bite him, do you?

• HAPPY TRAILS. In other quarterback news, Texas A&M backup Matt Davis is reportedly on his way out, opting to transfer to a nearby junior college for the 2012 season after falling to fourth on the Aggies' depth chart. Davis is probably best known as the guy who former coach Mike Sherman recruited to A&M immediately after getting word of his termination in December 2011 – Sherman was sitting in Davis' driveway when the call came in – but he also came in with high marks from the recruitniks and was considered a viable heir apparent to Johnny Manziel when the time came. Even if Manziel plays this season (every indication is that he will), Davis' premature departure puts the Aggies in a potential bind in 2014, when Manziel is likely off to the NFL and backup Matt Joeckel will earn his degree; if both leave, the only scholarship QBs on the roster will be Kenny Hill, a true freshman, and massively hyped 2014 commit Kyle Allen. 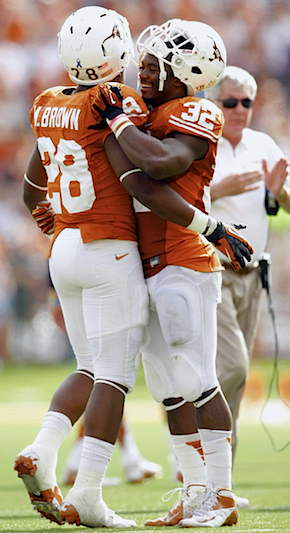 • THE WOLVERINE DIET WORKED FOR ME. A big part of the hype over Texas' prospects for 2013 is the presence of two former five-star recruits, Malcolm Brown and Johnathan Gray, in the same backfield with the overlooked but equally productive Joe Bergeron. As juniors, Brown and Bergeron are hitting the make-or-break point in their careers, and all three are preparing accordingly for the Longhorns' new up-tempo philosophy:

Texas seeks to squeeze 15 more snaps per game from its offense this season, and the backs have prepped for the increased load. Bergeron shedded weight this summer, dropping from 245 to 225 pounds, and Malcolm Brown altered his eating habits to minimize injuries — Brown missed nine games over his first two seasons. Gray, who rushed for 701 yards as a freshman, worked on his explosiveness in order to handle more carries between the tackles.

Brown's injuries the last two years have been (reportedly) to his toe, knee and ankle. Assuming he wasn't pounding large bags of Skittles before, any nutritionists in the house have any idea what kind of foods are touted as minimizing the risk to lower extremities?

Quickly… Everett Golson spends his season in the wilderness keeping up to speed with a private quarterback coach. … Indiana guard Dan Feeney, who started every game as a true freshman, is out for the season with a broken foot. … Ohio State loses a backup defensive back. … A former Michigan linebacker calls on Urban Meyer to end the "circle drill" at Ohio State practices. … Bill O'Brien has heard enough questions about Penn State's starting quarterback. … A few theories on SEC coaches voting Aaron Murray over Johnny Manziel. … And the New York Times wonders what could have been if Jadeveon Clowney had become a Harvard Man.