It always bugs me when football pundits list turnovers as a "key to the game." Of course it is. They might as well put a spotlight on throwing and catching. While it's obvious that a positive turnover margin will help a team win more games over the course of a season, I thought it would be worth our time to examine just how much it helps.

Share All sharing options for: Turnover Margin vs. Winning Percentage 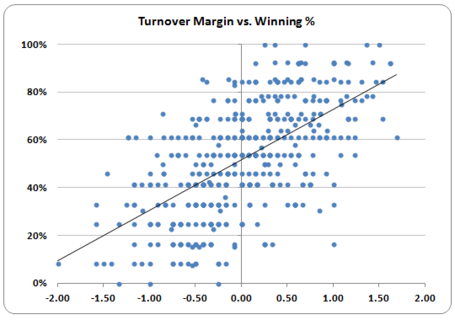 It's not shocking to see that on average, a higher per-game turnover margin leads to more wins. The relationship is somewhat strong, but obviously there are many other factors that go into winning percentage. The R squared (coefficient of determination) for the trendline shown in the chart is 37%, meaning that turnovers "explain" 37% of the win total data in this model.

The trendline gives us a formula that tells us how many wins a team with a turnover margin of "x" should achieve given the historical data. I adjusted the formula's output from a winning percentage to number of wins in a 12-game schedule:

Given the formula from the chart, we can determine how many games each team should have won in a season based solely on their turnover margin. Going further, we can see which teams over- or under-achieved their projected win total. Let's look at the top/bottom 20 achievers from the 2012 season...

So what does it mean if a team wins more games that the turnover margin formula says they should? Good coaching? Talent overcoming adversity? Dumb luck? I think there are so many factors that go into a small sample size college football season that it's difficult to isolate a definitive answer here, but let's take a look at the programs that have overachieved their projected wins in each of the last four seasons:

That's a pretty solid group of programs. I would argue that it's pretty simple -- good teams have the talent and the coaching to overcome a few turnovers.

*This is just insane. -2 per game! This team gained 12 turnovers and lost 36. What a miserable season.