The last word on ten recurring themes for the 2013 season. Today: Assessing the nation's most divisive quarterback.

Previously in this series: Quantifying the Clowney Curve" … Another year, another chance for the Longhorn Leap.
– – –

It's such a strange thing now, a fleeting footnote in the genre of mass hysteria, like the dot-com bubble or the Dutch tulip craze. But let the record show that, yes, in fact, there was a period in October 2010 when Taylor Martinez, unheralded freshman, was briefly anointed the next big thing in college football, the dynamic heir to Nebraska's lineage of prolific rushing quarterbacks and a burgeoning Heisman candidate with the numbers, the hype and the regrettable YouTube tributes to prove it. Before there was Johnny Football, a buoyant, freewheeling freshman phenom to whom the game came so easily it might as well be his name, there was T-Magic. It's all true. 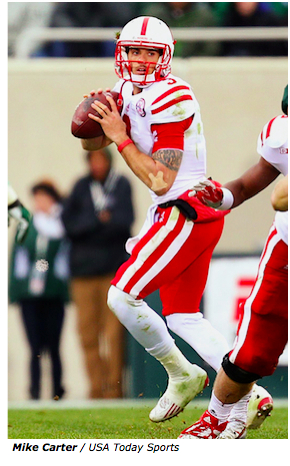 It is also true, three years later, that Martinez's résumé on the eve of his senior season justifies the early hype. As a junior, he led the Big Ten in total yards and pass efficiency and was tabbed by B1G coaches as a first-team all-conference pick. As a team, Nebraska led the conference in total offense and Offensive F/+, with Martinez accounting for nearly two-thirds of total yards. Over the last three years, Martinez has passed for more yards than any quarterback in school history and rushed for more yards than any active FBS player at any position.

Compared to the gold standards of contemporary Nebraska quarterbacks, Tommie Frazier and Eric Crouch, Martinez has accounted for more total yards, more yards per game, a higher efficiency rating and a greater percentage of the team's total offense in roughly the same number of starts. (Frazier started 36 games, Crouch 38; Martinez is at thirty-nine.) He'll pass Crouch for total touchdowns this fall in the fourth or fifth game. In the media guide, Martinez will go out in 2013 as one of the most prolific players in the most prolific generation of quarterbacks in the history of the sport.

In the hearts and minds of Nebraska fans, the truth is more… let's say, complicated. By the end of his breakout campaign in 2010, the homages to Martinez's legs had already been blunted by injuries, three losses in the last four games and persistent rumors about a transfer that would never materialize. As a sophomore he seemed to regress as a passer, leading to awkward standoffs with the media and outright mockery from fans and opponents alike. Last year, after working with a private coach in the offseason to salvage his wonky mechanics, Martinez went on to personally account for ten turnovers (eight interceptions, two fumbles) in the Cornhuskers' four losses alone. 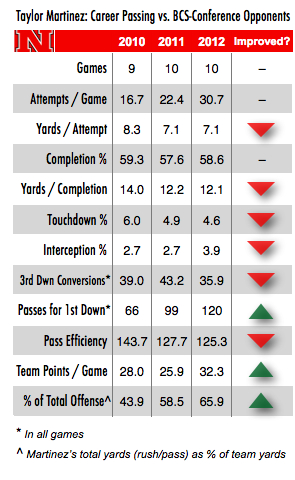 Part of the disconnect between Martinez's stat sheet and his reputation is purely aesthetic. But the skeptics have a few numbers, too. Excluding his gaudy afternoons against non-conference patsies, Martinez's efficiency against opponents from the "Big Six" BCS conferences has actually declined each of the last two years from his rating as a redshirt freshman. In the same span, he's been responsible for 29 fumbles, six more than any other FBS player, bringing his career total to 47; as a team, Nebraska finished dead last in the Big Ten last year with 35 giveaways, nearly half of which led directly to opponent touchdowns. (Nationally, the only team that turned it over more often was Idaho.) On the rare occasions Martinez was asked to throw beyond 15 yards downfield in 2012, his completion percentage – well above 75 percent on shorter throws – plummeted below 20 percent. All true.

The result is a kind of cognitive dissonance over Martinez that doesn't exist over any other current quarterback with such an extensive body of work. The guy who ties defenses into knots with his speed and vision in the option game is the same guy who consistently struggles to stretch Big Ten secondaries with his arm. The guy who punched his "clutch" card last year in come-from-behind wins over Wisconsin, Michigan State and Northwestern – the latter two on the road – is the same guy who served up a game-killing pick in the fourth quarter at UCLA, and committed multiple turnovers before halftime in each of the three biggest games of the season, double-digit defeats by Ohio State in October, Wisconsin in the Big Ten title game and Georgia in the Capital One Bowl. The offense that scored at least 30 points in all four losses is the same offense that contributed to opponents racking up 52 points off turnovers in those four games. At any given moment Martinez is the most heart-stopping player on the field, for both sides.

At this stage in his career – fifth-year senior, fourth-year starter – there is not much precedent for a great leap forward, especially for a guy who a) Has never been considered a blue-chip, NFL-bound talent in terms of his arm, and b) Has already logged two full seasons under the current offensive coaching staff. With a few exceptions, young quarterbacks tend to find their level relatively quickly, and more or less remain on that level for the rest of their careers. The question is, just how great of a leap from its quarterback does Nebraska need? Since his coming-out party in 2010, Martinez has settled into a reckless, boom-and-bust pattern that has undermined both his own outsized production and his team's chances of snapping a 12-year drought since its last conference championship. But the basic production is there: Resolving the ball-security/turnover issues would close most of the gap between the Huskers and the top of the Big Ten by itself. From there, even a modest step forward from the defense in big games would take care of the rest.

The alternative is to accept that Good Martinez and Bad Martinez are intrinsic parts of a yin-yang dynamic, the light creating the shadow, etc., which so far has been the case. He takes chances because he believes in his ability to make good things happen. Initially they did, and for the most part they still do. Unless that ratio moves far enough in the right direction in 2013 to lift Nebraska to the Big Ten title, he still risks being defined by the handful of times that they don't.