Morning Bell: If not Purifoy, then who for Florida's aimless offense?

Share All sharing options for: Morning Bell: If not Purifoy, then who for Florida's aimless offense?

• ARE YOU FEELING LOUCHEIZ? Loucheiz Purifoy is a cornerback – potentially a very good one, in fact, despite his role in the single most damaging play of Florida's 2012 season – so it is not exactly news that he continues to practice at cornerback. For Gator fans, though, it's all in the interpretation: After spending much of spring practice working at wide receiver, and being tabbed by coach Will Muschamp for more work at wide out this week, is Purifoy's ongoing absence from the offense a sign that the young receivers are beginning to earn the coaches' trust? Or simply that the two-way role of the most dynamic athlete on the roster has been greatly exaggerated?

Potential notwithstanding, the intrigue over Purifoy's position says a lot less about him than it does about the desperate lack of playmakers, a recurring theme in Gainesville since at least 2009. The most reliable target in 2012 was the tight end, Jordan Reed, who bolted early for the NFL; as a team, the Gators averaged a paltry 10.4 yards per reception and finished 106th nationally in passes covering at least 20 yards. Sixty percent of quarterback Jeff Driskel's completions went for less than ten yards – 60 percent! – and fewer than half resulted in a first down. The resident deep threat in 2011, Andre Debose, had just three receptions in 2012, and won't play at all this year after tearing his ACL earlier this month.

Not surprisingly, the search for a spark in the spring centered heavily on fresh faces, most notably Purifoy and early-enrolling freshman Demarcus Robinson, who may already be the most reliable target in the rotation. There was also freshman tailback Kelvin Taylor, son of ex-Gator/Jacksonville Jaguar Fred Taylor, who graduated high school in December as the most prolific back in Florida prep history after breaking Emmitt Smith's career rushing record. On Monday, though, Muschamp listed a walk-on (Mark Herndon) and a newly converted safety (Valdez Showers) ahead of Taylor on the three-deep, which didn't even include presumptive starter Matt Jones due to a lingering injury. Regardless of the final record, Gator games are going to be as ugly as ever.

• ANGRY FSU RECEIVER HATING GOD? Down the road a bit, Florida State is beginning to find itself in a similar situation, albeit for a different reason: Although the Noles were sets to return a handful of proven targets from 2012, the ranks are dwindling fast. Not including an apparent hand injury to leading receiver Rashad Greene at the end of Monday's practice – the extent of which remains unknown – FSU has already lost one wide out (Jared Haggins) and two tight ends (Kevin Haplea and Jeremy Kerr) to season-ending injuries; another receiver (Willie Haulstead) to academics; and a likely starter (Greg Dent) to an indefinite suspension following a June arrest. At this rate, by opening night Jameis Winston will be firing slants at the star of the Sig Ep intramural team. 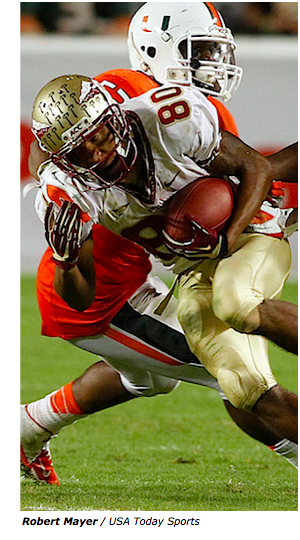 A mild exaggeration. If Rashad Greene (right) is forced to miss any game time, Winston will still have veterans Kenny Shaw and Christian Green at his disposal, but the most intriguing option in any case may be Kelvin Benjamin, who had 495 yards on 16.5 per catch as a redshirt freshman while drawing some fairly absurd comparisons based on his prototypically lanky body type. Benjamin admits now to be being "lazy" during his redshirt year in 2011, and (according to coach Jimbo Fisher) too easily frustrated by the more routine, workmanlike aspects of the position. Under the circumstances, now would be an especially opportune moment for the light to come on.

• THE 'G' STANDS FOR 'GREEN.' For Georgia, the injury bug is biting hard in the secondary, already a major concern due to a) Extreme youth aside from junior cornerback Damian Swann; b) The suspension of blue-chip sophomore/spring MVP Josh Harvey-Clemons for the opener against Clemson; and c) The presence of Tajh Boyd and Sammy Watkins on Clemson's roster. Both projected starters at safety, Corey Moore and true freshman Tray Matthews, remained on ice Monday with injuries that have sidelined them for most of the month. In their place, there was a gaggle of freshmen (Quincy Mauger, Brendan Langley, Shaq Wiggins) and multiple rounds of silent prayer.

• SPECIAL BY DEFAULT. True freshman Justin Davis left spring practice listed along with two other players at the top of USC's tailback depth chart, and a little more than one week before the Trojans' opener at Hawaii, he's still there. While injuries have limited vets Silas Redd, Tre Madden and D.J. Morgan, as well as the more hyped of the freshmen, Ty Isaac, Davis has practiced through a gimpy ankle and seems to have the inside track on taking the first handoff in his first college game. "Every time [Davis] is out there," Lane Kiffin told the L.A. Times, "it seems like something special happens." It also seems like a very, very long time since we've been able to say that about a Trojan tailback in an actual game, but you never know.

• Pick 'em where they live. I truly love this poll, and not only for the fundamental absurdity of the exercise: 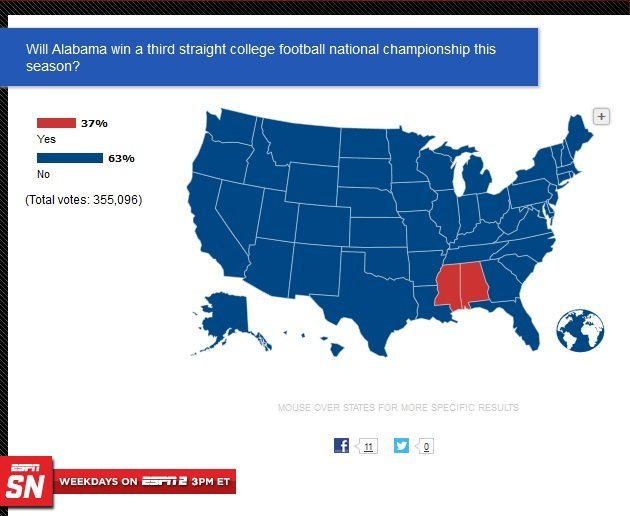 Brazen geographical bias is always entertaining, but this question also raises one of the basic realities of making preseason predictions, or predictions in general: When it comes down to any one team, specifically, the answer should always be "no." Regardless of who you're rooting for, how successful they've been in the past or how monolithically dominant they appear to be on paper, the odds are always against them. The margin for error is too small. (Even for Nick Saban: Consider the number of improbable dominoes that had to fall in Alabama's favor the last two years to allow the Crimson Tide to overcome November losses in both seasons.) Picking a preseason favorite is akin to playing the lottery, in that somebody is going to win. But the chances of any specific ticket stringing together exactly the right combination without a misstep are almost too long to contemplate. In Alabama's case, you also have to factor in the odds of winning three championships in a row, which to this point – historically speaking – are zero.

That said, clearly Alabama's odds of accomplishing one or the other are better than anyone else's. If betting on anyone is dumb, betting against the Tide is even dumber.

Quickly… Ohio State taps sophomore Armani Reeves to replace Bradley Roby in the season opener, against the mighty Buffalo Bulls. … Auburn will be without its top pass rusher against Washington State. … Bob Stoops waffles some more about Oklahoma's starting quarterback. … Wisconsin looks for ways to get its backup quarterback on the field, in one capacity or another. … Notre Dame replaces Tyler Eifert with tight end by committee. … I don't know how, exactly, but I am convinced that the absence of television in David Ash's childhood will be relevant to Texas' final record. … And even the locals are making fun of the new bowl game in Montgomery, Ala., the Camellia Bowl, which will pit also-rans from the MAC and Sun Belt beginning in 2014. But I love it already for not being named the Dave and Buster's Bowl Presented by Raycom.