Why aren't we covering those guys?!

There is perhaps nothing more maddening to fans than a defensive gameplan that gives the other team's receivers big cushions from the corners. Why do teams keep using that tactic?

Share All sharing options for: Why aren't we covering those guys?!

Giving outside receivers a large cushion is one of the most infuriating tactics in football. It's generally regarded as being synonymous with some kind of "bend don't break" strategy and often dismissed by coaches who don't employ the alignment.

Nevertheless, many teams continue to give receivers big cushions in their defenses and drive modern fans crazy with fear and frustration about allowing the offense to work down the field with the cheap "horizontal" passing game. The reasons that coaches still employ these alignments despite the seemingly obvious downsides of allowing "easy" short passes are multiple and some are less obvious. Here at Football Study Hall we're here to help you understand the non-obvious nature of football.

Let's begin with a few myths about the use of large cushions on receivers.

Myth no. 1: You're giving away cheap yards!

Generally when people complain about large cushions they are not picturing this result:

But something more along the lines of this:

In reality, a quick hitch pass against a corner playing in a deep alignment will just as often result in a big hit on your receiver, possibly even a pass break-up. What people should be disparaging is usually not deep alignments by the corners but deep alignments played poorly.

Also ignored in this fallacious argument is the idea of what constitutes "cheap yards." A throw to the outside receiver on the other end of the far hash is a long throw fraught with peril. There is great need for both accuracy and velocity on the throw to be effective. If the throw doesn't meet those requirements, you are looking at a minor gain of yards unless the defense misses tackles.

That's a high risk, low reward throw for the offense and a sensible one for the defense to allow. You can't defend the entire field, so it makes sense to encourage throws to parts of the field that are easier to defend and won't break your back.

Myth no. 2: Good, modern defenses don't give up big cushions

In fact, last year's No. 1 defense on passing downs was a team that often uses deep alignments from much of their secondary: the LSU Tigers.

LSU relies on having physical ballhawks in the secondary with lightning quick reaction times and speed to close on the ball.

Obviously not every team has athletes on par with those in the Bayou, but the Tigers still employ big cushions to keep the ball in front of them without then allowing cheap yardage of the kind that results in an effective passing offense. 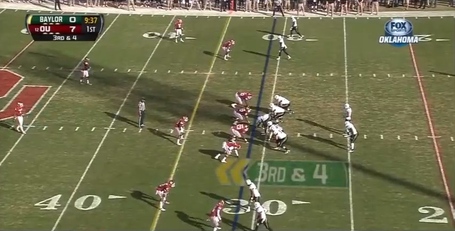 The Sooners certainly benefited in their pass defense from the fact that new/old defensive coordinator Mike Stoops would use Dime personnel against four WR formations and match-up opposing receivers with tight coverage from well-coached athletes.

However, if soft coverage on the outside was as destructive as commonly perceived, than offenses would not have struggled so much against the Sooner pass defense.

So, good teams are using soft coverage at times, why are they doing it? The reasons vary from team to team, but teams use the tactic for two primary reasons:

1. The defensive backs have deep responsibilities

Many different coverages en vogue today rely on the cornerbacks to prevent deep passes down the sideline. For teams employing these schemes, it's vastly preferable to be vulnerable to short passes to the sideline than to get beat over the top for quick scores.

Even teams using variations of Cover-2 typically have pattern-matching assignments that require their corners to stay deep on sideline routes if the offense sends multiple receivers on vertical routes.

In the instance of Oklahoma, they played "Palms" defense, which is a pattern-matching Cover-2. Within that defense the corners often had primary or secondary responsibilities to stay on top of deep sideline routes.

With LSU, they often played variations of Cover-3 which necessarily asked their corners to maintain a deep 1/3 of the field and not allow any receivers past them in that zone.

Then there's the Fire Zone blitz, best friend to many defensive coordinators in achieving safe pressures against explosive modern offenses. The Fire Zone, just like its cousin, the Cover-3 defense, asks three players to defend the deep field split into three deep zones.

Under Manny Diaz, the Texas Longhorns defense sometimes presents obvious 3-deep shells on passing downs. It was simple enough that the 'horns are bringing a Fire Zone, but which of the underneath defenders are blitzing and which are dropping into "hot zones" is still a major mystery to the opposing QB.

Other blitzes beyond the Fire Zone also generally rely on the corners not getting beat on vertical routes by the offenses' typically dangerous outside receivers. In the modern era of offense, defenses prefer to take their chances in these schemes rallying to the short throws rather than risking giving up easy touchdowns over the top.

For teams with good athleticism on defense, the risk of potentially giving up short passes is considerably less, and it's often a good way to exploit team speed.

Within different versions of Palms or Cover-2 defenses, different players are responsible for "run force" within the structure of the run defense.

The job of the player with the run force assignment is to be the widest man on the perimeter of the run defense. He's looking to keep the runner inside of him and funneled inside to the pursuing linebackers, linemen, and other defensive backs.

Against spread sets by the offense, that job might go to any number of defensive players. For the Oklahoma State Cowboys, ranked 27th in Passing S&P+, or their rival Sooners, that job typically went to the outside linebacker to the field side, and the safety to the boundary side.

This is how these Okie teams' boundary safeties, Daytawion Lowe and Tony Jefferson, were able to lead their teams with 75 and 119 tackles respectively. In this way, Cover-2 teams that want to involve their safeties in run support can play their boundary-side safety in an active run defense role and task the boundary corner with maintaining deep leverage to that side of the field.

Using safeties in run force roles also helps Cover-2 teams bring favorable numbers against the run game and prevent the boundary outside linebacker from having to leave the box to force the run against multiple receiver sets as above.

Of course, this just means that the boundary corner has to be able to play deep routes to his side of the field and be positioned to play a deep safety role. Even if he's a great athlete you'd better align him deep to make sure he isn't destroyed by vertical routes.

So in a Palms defense of the type many teams use today, you could end up in a defensive formation with both corners sitting 5-10 yards off the ball.

In the instance of the boundary corner, he could be trying to handle a post snap defensive role of preventing deep passing plays from getting behind him while an athletic field corner opposite would have every reason to invite the long, difficult throw to his receiver and rely on his quick responses and ball skills to make the play.

Perhaps the most damning fact about the vitriolic fan response to frustratingly large cushions by the corners is the equally violent response by those same fans when their offense attempts to exploit similar soft cushions with quick outside throws.

The fan then curses when the next short pass results in the team's star receiver getting crushed by a star corner and then fumbling the ball away.

Football is a complicated game, and the spread offense has made defensive strategy even more agonizing as coordinators debate the merits of dying by razor cuts or chainsaw swipes. Many coaches find soft cushions on receivers to be an acceptable trade-off for the flexibility of presenting different run fronts in exchange for "cheap yards" to teams with extra-dynamic receivers or brilliantly accurate, strong-armed QB's.