The Effects of Your Drive on Your Opponent's Next Drive

Taking a look at how the outcome of your own drive influences your opponent's next drive.

Share All sharing options for: The Effects of Your Drive on Your Opponent's Next Drive

I like to imagine college football as a set of swinging pendulums. With each drive you attempt to swing your ball as close as you can get it to scoring, and then if you turn it over or punt the ball your opponent has a chance to swing it back over to their side. Only when one team scores does the pendulum get reset and it starts back over again. What I set out to do was to put some numbers behind the mechanics of this pendulum.

Every post I write has to start out with a big thanks to CFBstats, who has provided a treasure trove of data on college football. Using that data I already looked at how having the ball at a given yard line and down affects the outcome of your own drive. In this post I wanted to look at how having the ball at a given yard line and drive outcome affects the outcomes of your opponent's next drive. In order to do this I had to create a dictionary of both the ending of your current drive and the ending of the next drive. Then I had to verify that the next drive listed was from the same game and that your current drive and the next drive did not result in the end of half. Once that was done I filtered for non-garbage time plays only, and then went about tabulating the average start spot of the next drive and the drive outcome. Now, we can look at some charts.

First, I wanted to see what kind of numbers involved with the "second level" drives. If I am looking at each yardline and outcome combination, I am inevitably going to have some small sample sizes. For example, no one from 2005-11 punted the ball after having the ball one yard from the endzone, and thank goodness for that. Here are the rest of the totals: 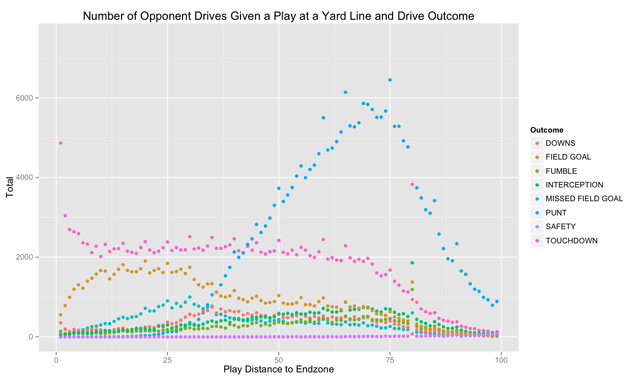 You should read this plot like this: This is the total number of opponent drives that result from you having the ball at a given distance to the endzone and ending your drive in a certain outcome. The only point that is missing is having the ball at your own 20 and ending your drive in a punt, there were over 10,000 opponent drives of those and I wanted to make everything else easier to see. For some of the outcomes it will be hard to draw too many conclusions, but I will make adjustments when it is necessary, for now I'll just keep all of the raw data.

One of the first things I wanted to see was how did ending your drive in a certain outcome affect your opponent's starting spot for their next drive. Here is a plot showing just that: 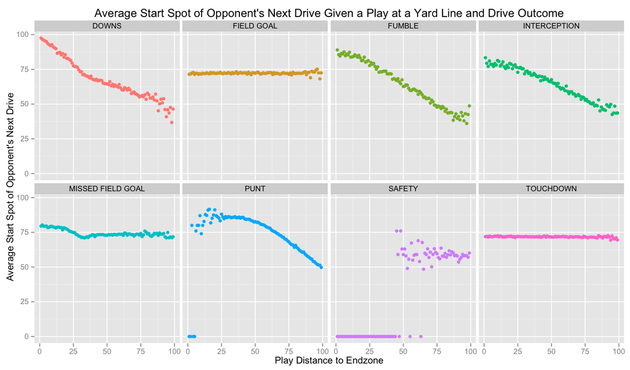 Just so we are clear, each grid represents how you might have ended your own drive, and the points represent the average starting spot of your opponent's next drive. The x-axis represents you having a play at that yard line in your drive that ended in a given outcome. And a value of '0' for you opponent's start spot means there were no instances of that occurring (looking at you Safeties). Here are some of my observations:

Now that we have the average start spot we could use the same drive outcome expectations for yard lines I calculated for all drives, or even use the drive values and apply them to the next drive to get some kind of point value for your drive and your opponent's next drive. But, it is my hypothesis that your outcome affects the outcome of your opponent's drive. It not only matters what yard line you reach on your drive, it also matters how you ended that drive. And my hope is that we can capture this in the data. So what could that look like? A good example is the following chart, showing the likelihood that your opponent ends their drive in an outcome given that you had the ball at a certain yard line and ended up turning the ball over on Downs. 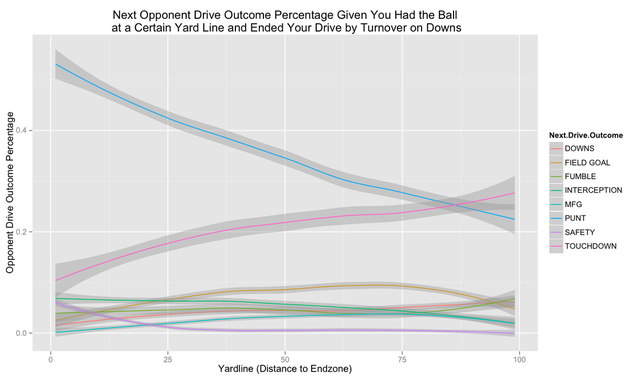 I apologize for the colors being kind of hard to read, especially to those who are color blind, but there are still some interesting things to learn here. (Here is a plot separated by outcome if this plot is hard to see) If you get the ball inside your opponent's 10 and turn it over on downs, you are more likely than not to have your opponent just go ahead and punt the ball right back to you (the top line is Punt %, the line that crosses it at the end is Touchdown %). Perhaps these numbers should tell more coaches to use fourth down as an opportunity to gain more yards to get a first rather than kick a field goal in the redzone.
Here is a plot showing the differences between your opponent's next drive when you fumble the ball versus throwing a pick: 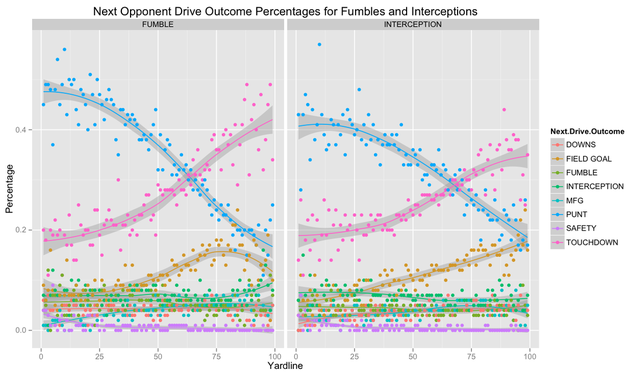 I wanted to show the raw points to give you an idea of what the smooth lines and bands mean. The smaller the bands around the line the tighter the range of percentages is around the yard line. So back to what the plot can tell us.
I'll give you guys one last plot before we are done, this is the final drive outcome percentages for your opponent's next drive given you had the ball at a certain yard line and ended you drive in a given outcome: 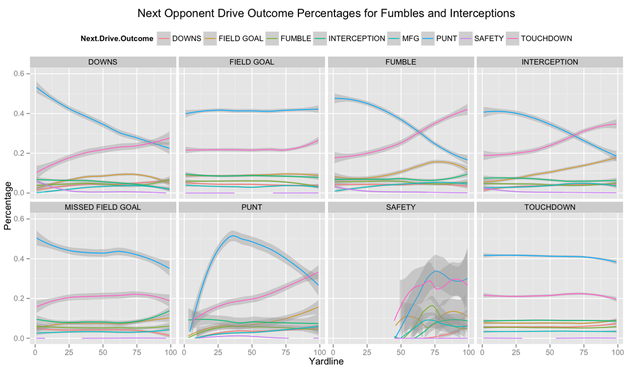 These plots make it seem like there is definitely something to my thinking that that your outcome affects your opponent's outcome, not just by field position. I am still working on ways to test this theory and present the data, but I just wanted to get a post out there so they aren't incredibly too long to read. Is there anything you guys are interested in that I didn't cover? Let me know in the comments.