Looking at how often drives end in certain outcomes.

After hitting a wall on my third down analysis I needed a break from third downs and wanted to look at something else. The following is what came out of that, and now I also have a new topic to explore. I have always been interested in knowing exactly what percentage of possessions end in touchdowns versus punts versus interceptions and all other outcomes, and thanks to CFB Stats I can now answer that question.

I grabbed all of the play-by-play data and drive data provided by CFB Stats for the years 2005-11. I kept 2012 data out of the sample because I would like to keep that data for testing purposes on any models I may develop out of this analysis, but seven years of data is plenty. The play-by-play data and drive data match up with a game code and drive number, so I can link any drive information contained in the drive file to any play-by-play information contained in the the play data. The drive file provides the end result of each drive, so after linking the date files I know the drive outcome of each and every play that occurred. After that I filtered for plays only between FBS teams and also only in non garbage time (using the same conventions as Football Outsiders) and tabulated the outcome percentages by yard line and down. Oh, and I ignored drives that end at the half. So lets get into the results.

First, I want to provide you with the sample sizes I am dealing with. Here is a plot of the total number of plays for each down and yard line combination in my sample set. First down at your own 20 is off the charts with over 15,000 plays that start there. I just remembered about the NCAA Kickoff and Touchback rule changes that went into affect last year so that is something I will need to keep in mind when looking at the 2012 data. But, for the most part there are plenty of plays at each yard line to separate the analysis by down.

(Note: in the CFB Stats data, the 0 yard line is the opponent's goal line (i.e. where the touchdown occurs), while the 100 is the offense's goal line.) 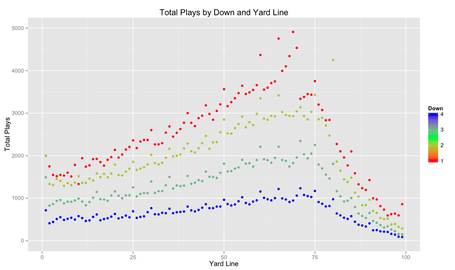 Now for the good stuff. Here is a collection of plots that show you the percentage of drives that end in a given outcome where a play occurred at a given down and distance. 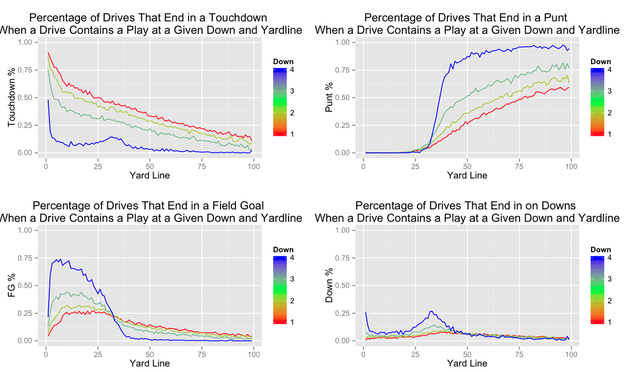 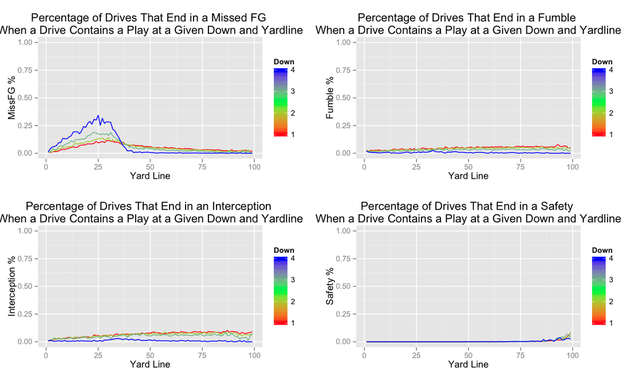 Just to be clear, what these charts show are, "Given a play on a certain down and yard line, how often is the end result of the drive the specified outcome."

Here are some of my observations, feel free to put yours in the comments.

So what can we do with this information? Well, the first thing I thought of was to calculate an expected point value for any down and and yard line combination. This expected value is the number of points you can expect to score on your current drive given your current play status. How I got the expected value was this formula

I know that you don't make every extra point so sometimes your touchdowns aren't worth a full 7 points, but its just easier and I already made the chart. 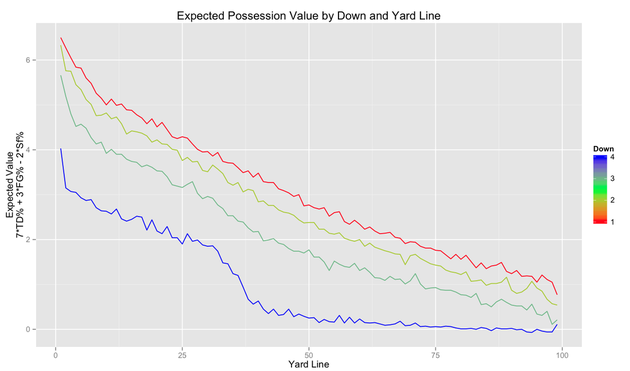 This is just the raw data and I will probably smooth this if I want to do any predicting, but the raw data still is pretty interesting. The lesson from this chart is convert your third downs! The drop from third-down value to fourth-down value is predictably huge. My next posts will look into not only your current drive's value, but your opponent's next drive following yours, and hopefully even your next possession after that. Any suggestions or comments or criticisms are fully welcomed.

For the fellow nerds; I used Python to manipulate the data and R to make the plots using the ggplot2 package. If you have any questions about how I did anything then fire away in the comments or email me. You can find the actual data files that I used to produce the plots here.