Can Jarvis Jones match the versatility that has defined the Steeler linebacker tradition?

Share All sharing options for: Jarvis Jones and the Pittsburgh Steeler linebacker tradition

Although the term has come to define the entire Pittsburgh defensive tradition, the original "Steel Curtain" nickname was actually applied for the defensive line that was anchored by "mean" Joe Greene and helped the Steelers capture Superbowl championships in 1975, 1976, 1979, and 1980.

However, playing behind that line was the linebacker trio of Jack Ham, Jack Lambert, and Andy Russell. Ham is considered one of the greatest outside linebackers of all time, while Lambert was the first "Tampa-2" middle linebacker, who dropped into the deep middle of the field on a regular basis a few decades before Steeler assistant coach Tony Dungy and Monte Kiffin popularized the tactic in the late-1990s.

In turn, Dungy had an assistant coach at Tampa Bay by the name of Mike Tomlin, the current head coach of the Pittsburgh Steelers. However, the Steel Curtain defense that Tomlin inherited in Pittsburgh was no longer the 4-3 defense developed under Chuck Noll. Instead, the Steelers had come to be defined by the 3-4 defense that Bill Cowher installed and that Hall of Fame coach Dick Lebeau had transformed.

Since the 3-4 was brought to Pitsburgh in the 90's, the Steel Curtain defense has been known primarily for the play of its linebackers, with respect to defensive linemen like Aaron Smith or Casey Hampton, and defensive back stars Ike Troy Polamalu.

Originally Greg Lloyd and Levon Kirkland dominated offenses, then Chad Brown and Kevin Greene defined the legacy. Later in the late-90's and early-00's, Joey Porter's pass rushing on the outside and James Farrior's play inside defined the Steeler defense. When Joey Porter was allowed to walk, the Steelers quickly plugged in an undrafted free agent named James Harrison, who was named Defensive Player of the Year in 2008 for the Steelers' second Super Bowl championship of the decade.

Now James Harrison is moving on, and all eyes in the city of Pittsburgh are on returning players like Lamarr Woodley, Jason Worilds, and incoming rookie Jarvis Jones. But before we examine the potential impact of Jarvis Jones, it's worth unpacking how exactly the Steelers have been able to plug'n'play different linebackers into their defense.

Since LeBeau came back to Pittsburgh in 2004 they've ranked in the top 10 of Football Outsiders' DVOA rankings every year save for in 2012 (finished 13th), finished in the top five in five of those nine seasons, and finished first twice. Their track record of brilliance with different linebackers plugged into the system is a remarkable feat.

It's not enough to point to the 3-4 scheme, as much of the league has also built around that formation. Nor does LeBeau's status as architect of the Zone Blitz really stand out, as almost every football team at every level of the game now uses the concept.

In reality, the reason for the Steelers' prolonged defensive dominance and linebacker excellence is the combination of the organization's systemic strength, LeBeau's constant innovation, and the Steeler defense's focus on versatility.

"I was a 4-3 end at Michigan, and I think I dropped into coverage six times," Woodley says. "When I got here, I knew they were drafting me to pressure the quarterback, and I didn't know why they'd want me to drop back.

"But I drop back 40, 50 percent of the time now, and I see why. The tackle doesn't know what I'm doing, and it keeps me fresh. If you're not rushing, not righting with someone, you're running with a receiver."

In their base 3-4 defense, the Steelers will generally respond to offensive formations like this: 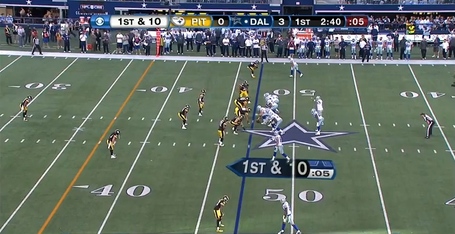 Woodley is standing up on the top over Dallas' Tight End Jason Witten, while Harrison is on the lower hash, presenting himself as a threat to either drop out in coverage over the slot receiver or blitz off the edge.

Even in the Steelers' basic Cover-3 schemes, it's very difficult for the Cowboys OL to determine whether Woodley or Harrison will be the 4th pass rusher trying to bring down Tony Romo. It'd be nice to think that free safety Ryan Clark's deep position and the tight coverage on the outside receivers would clearly indicate Cover-1, but the tandem of Polamalu and Clark are every bit the masters of disguise that Woodley and Harrison can be on the line. 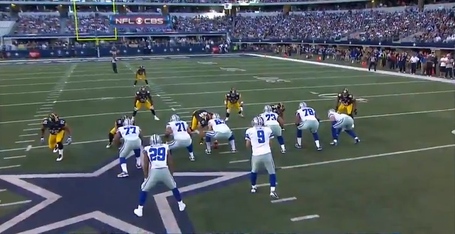 Late before the snap Harrison has snuck much closer to the line of scrimmage, too close to maintain his responsibilities on the #2 receiver in LeBeau's "Seam" pattern-match coverage technique. So Harrison is the fourth rusher, right? 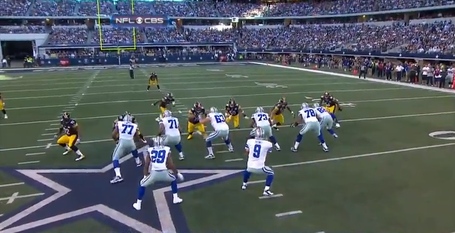 The ball is snapped, and both Woodley and Harrison are starting to backpedal into coverage, meanwhile inside backers Timmons and Foote are firing at the line of scrimmage in one of LeBeau's dreaded inside zone blitzes. 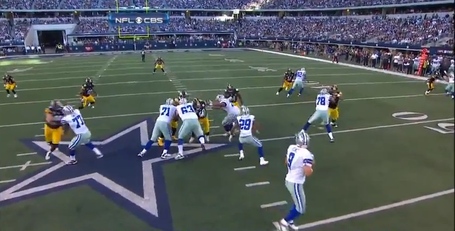 Harrison is assuming the shallow middle of field coverage responsibilities, while Woodley and Polamalu are the Seam players. The defensive ends have come outside to draw OL help, clear space in the middle, and contain Romo in the pocket. 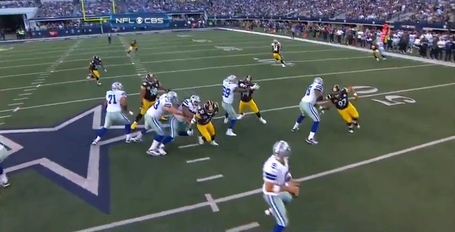 Soon Timmons and Foote are loose up the middle and Romo manages to hit the outside receiver (Austin) to the top left with an extremely trusting comeback throw that barely beats former practice squad corner James Victorian, who was thrust into action by injuries. A lesser QB than Romo would have surely been flattened.

Harrison was a very dangerous pass-rusher, and had three consecutive 10-sack seasons from 2008-2010. Woodley also had at least 10 sacks in the exact same years. However, the Steelers' defense achieves extreme production from its outside linebacker positions without sending them crashing into the OL all the time, but by attacking pass protections with all four linebackers (and with the safeties as well) coming from different angles at different times.

Enter Jarvis Jones. In Georgia's 3-4 defense, the linebacker was virtually never asked to handle any responsibilities against the pass save for "get the quarterback," a role in which he excelled.

Jones had 14.5 sacks in his senior season with Georgia and usually lined up outside over tight ends, as he will in Pittsburgh, as well as over offensive tackles in nickel and dime packages, which he will also be asked to do in the NFL.

In the roles that Jones was asked to perform, he excelled. Against Alabama in the SEC Championship game his pass-rushing dominance limited how the Crimson Tide could attack the Bulldogs with the pass game. 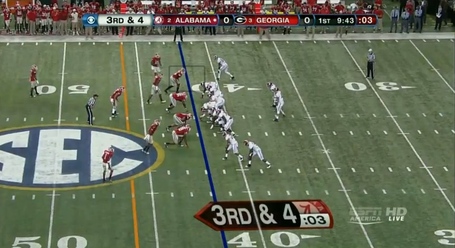 The Bulldogs have him lined up as a 9-tech here, outside of the TE. Alabama has three receivers on the field and are in the shotgun, indicating a likely passing play. 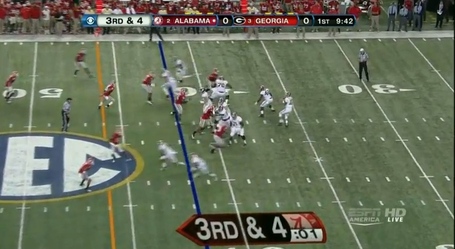 They send the TE past Jones on a route, leaving first round draft pick D.J. Fluker, the right tackle, to deal with Jones in pass protection. However, they have their RB ready to pick up Jones if he beats Fluker, essentially ignoring any other potential pass-rushing threat. 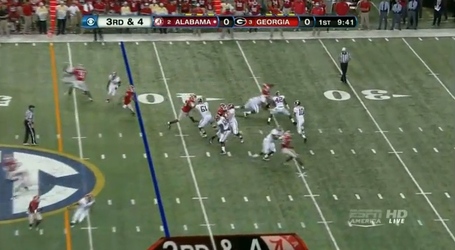 Fluker flails to the ground attempting to cut off Jones' speed rush and the running back is forced to pick him up to prevent pressure. 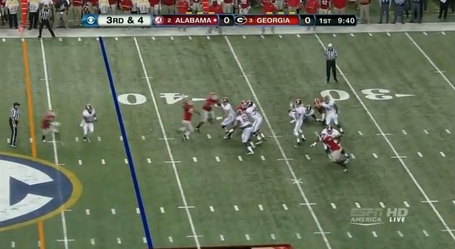 Jones is slightly off balance as he careens into the running back, who attempts to shield him from reaching A.J. McCarron. However, McCarron pump fakes here, seeing the break the defender has on the short crossing route he's considering. 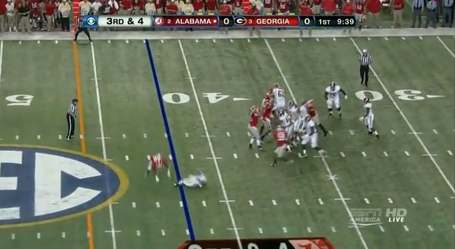 That extra instant caused by the pump fake is all that Jarvis Jones needs to blow inside past the running back and slam into McCarron from behind, leading him to drop the ball.

Even with extra protection and future NFL tackles like Fluker and Cyrus Kouandjio, Alabama was unable to protect McCarron from Jarvis Jones in this game, and he had two sacks. Fortunately for Nick Saban, the middle of the Georgia defense could not withstand the Warmack-Jones blocking duo, and Alabama ran up the middle all night long en route to their tight victory.

As a perimeter run defender, Jones also demonstrated elite athleticism and play-making skill over the course of the year and accumulated 24.5 tackles for loss. Against Florida, whom Jones absolutely decimated, he found himself in a situation he will frequently face in Pittsburgh. 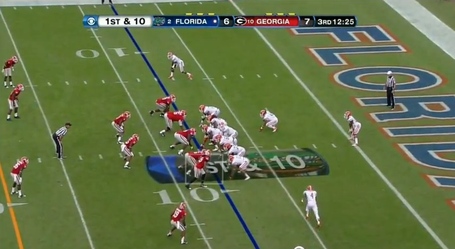 Georgia is aligned much like Pittsburgh's base defense with the DE's lined up over the tackles and Jarvis Jones outside over the Gator TE. 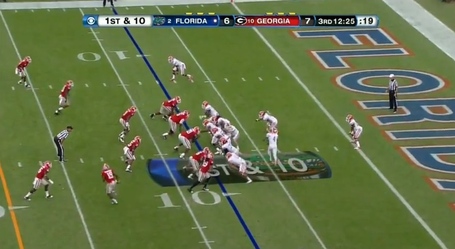 Florida brings the receiver on bottom in motion across the formation as a potential sweeper. As a result of this motion, the Georgia defenders have to freeze in case they will have to chase him down on the perimeter. Meanwhile, the right guard is pulling back to Jones along with the fullback. 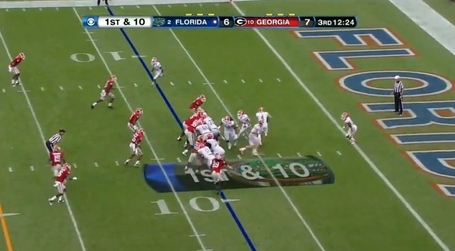 Jarvis follows "block down step down" rules and comes inside to eliminate a crease opening up between the TE he was lined up across and himself. Because the Georgia linebackers had to honor the WR sweep, they are a step behind in trying to beat the pullers' to the outside on the running play. It's essential that Jones blow up the block and spill the play outside so that the Georgia defenders have time to chase it down. 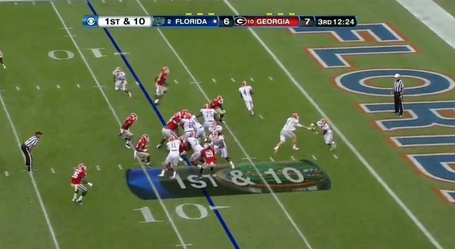 Jones steps inside perfectly to take on the block but the Georgia inside backers are walled off by the TE. The intention of Florida is for the guard to blast Jones out so the fullback can come inside and drive the safety or a linebacker out of the way. The hope for Georgia is that Jones can blow up the guard's block and free up the safety to chase down the running back on the edge.

But notice that Jones has just taken a step inside with his right foot... 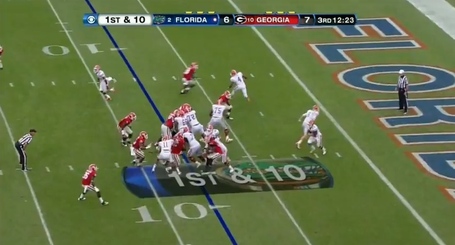 He greets the pulling guard with a spin move. Not only has he closed off the intended inside lane for Florida's Counter run, but he's also cut off the inside path for the fullback who is now stacked uselessly in the backfield. 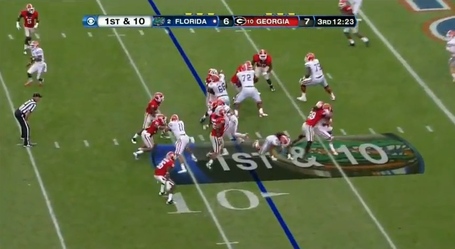 Jones then spins off the guard and hits the Florida running back three yards behind the line of scrimmage, single-handedly turning a big potential gain into a loss for the Gator offense.

This kind of speed and athleticism on the perimeter will serve Jones well in Pittsburgh, where he will be asked to take on pullers, fullbacks, and tight ends routinely on the edge both against the run and the pass. The remaining questions are in regards to how he handles the pass defense of the Steelers, which is heavy on communication and often plays out like a basketball defense shouting out instructions in responding to a pick'n'roll.

If LeBeau and the Pittsburgh staff can maintain their excellent tradition of training athletic pass-rushers to become well-rounded in their defense, it's very likely that the name of Jarvis Jones will take its place with the others in the Steeler linebacker tradition.