Random blast from the past: Jackie Sherrill eyes Texas A&M

Play around in the Google News archive enough, and you stumble across some fun things.

Share All sharing options for: Random blast from the past: Jackie Sherrill eyes Texas A&M 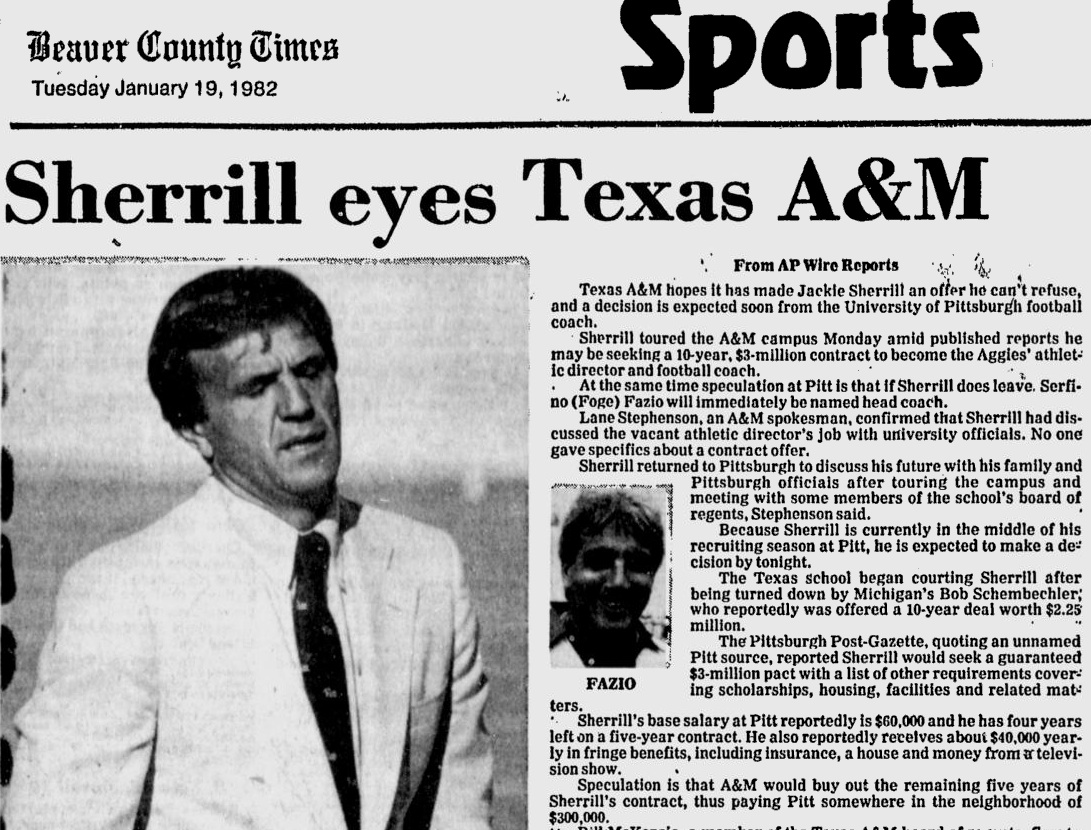 Before Sherrill was leading Mississippi State to unexpectedly great and unexpectedly terrible seasons, and before he was making "Jackie Sherrill Castration" a legitimate Google search item (here's the most interesting read from that search), Sherrill was Pittsburgh's head coach, the guy who recruited Dan Marino, the guy who, as associate head coach, had helped Johnny Majors to put the pieces together for Pitt's rather surprising 1976 national title season.

Following the 1976 title, Pitt lost Majors to Tennessee. They snatched up Sherrill, who had spent one season as Washington State head coach (Wazzu would replace him with Warren Powers, who also stayed for just one year before taking the Missouri job), and while Sherrill didn't win another title, wow, did he come close. Pitt went 11-1 in 1979, losing only at North Carolina early in the season. The next year, the Panthers went 11-1 again, losing only at Florida State. And in 1981, they began the season ranked eight and spent a month at No. 1 before a jarring blowout loss to No. 11 Penn State. They rebounded with a 24-20 win over Herschel Walker and No. 2 Georgia in the Sugar Bowl, but a couple of weeks after the bowls, they found themselves once again about to lose their head man.

Sherrill indeed left for Texas A&M, where he was tasked with rebuilding a program that had fallen on hard times. Tom Wilson had gone just 17-17 in three seasons, and it took Sherrill three years (16-16-1 record) to build anything noteworthy. He went 29-7 from 1985-87, but A&M was put on probation in 1988, and he resigned that December. He resurfaced three years later in Starkville, where he won some games, took home the 1998 SEC West title, and castrated a bull.

Pittsburgh, meanwhile, is still trying to recover. Foge Fazio did pretty well with Sherrill's recruits -- the Panthers started the 1982 season, Marino's senior year, at No. 1, but lost three times and finished No. 10. They went 8-3-1 in 1983 and started 1984 ranked third in the country but finished just 3-7-1. Fazio was done a year later. In the 27 seasons since Fazio's departure, PItt has finished ranked only four times, never better than 15th in 2009.