4th down and the run

Share All sharing options for: 4th down and the run

Welcome to part two of the series exploring fourth down. This time I’ll look at the numbers behind running on fourth down and explore many of the aspects we looked at in the previous article, 4th Down and the Pass.

During the 2012 Charting Project, the Football Study Hall team recorded 138 fourth down rushing attempts, including traditional runs, options, reverses, QB sneaks and scrambles (with the scrambles presumably coming from botched pass attempts, but I’m going to count them). Much like passing on fourth down, I tried to identify a few trends that emerged when teams attempted to run on fourth, which include:

When charting for the previous article, my favorite piece of data to look at was field position because it provided a very interesting indicator of risk acceptance or aversion. Having had so much fun with it in the previous article, it was the first thing I tackled here (no pun intended). Just as with passing, teams rushed with the highest frequency outside of field goal range. However, unlike passing, which trailed off within field goal range, rushing attempts fluctuated based on distance. I was happy to see that at longer distances, teams followed the adage lauded by in-game commentary that says, “at least walk away with three points on the board.” What the graph below shows is exactly that—a fifty percent decrease in rushing attempts when teams were within field goal range—except when in the shadow of their opponent’s end zone. See the chart below.

Based solely on field position, it appears teams were willing to kick the field goal and settle for three points between the opponent’s 10-20 yard lines, reserving the riskier alternative—rushing—for attempts outside of field goal range or where the payoff was higher (touchdown). This is a very logical decision for three reasons. First, if an offense stalls out and fails to convert on fourth down between the 20-10 yard lines, that offense failed to provide their defense a substantial field position benefit, and taking three points would have been better than none at all. Second, kicking from the hash marks within the 10 yard line makes for an increasingly difficult “chip shot” as the angle decreases closer to the end zone. This in turn makes rushing less of a risk. Finally, even if the offense fails to convert on fourth down within the 10 yard line, that offense has now successfully pinned their opponents deep within their own territory.

My second step when looking at the data for running on fourth down was to identify the point difference between the two teams when the fourth down was attempted. If you read the first article in the series (refresher here), you will remember that 75 percent of teams passing on fourth down were trailing, and over half of all attempts were made by teams trailing by multiple scores. However, when we look at rushing attempts on fourth down, we get an entirely different image. Instead of seeing the trailing teams attempting at higher rates, we actually see a near mirror image between leading and trailing teams. Below is a graph showing the difference in score when fourth downs were attempted. (Note: in this article “one score” refers to one touchdown plus successful two-point conversion). 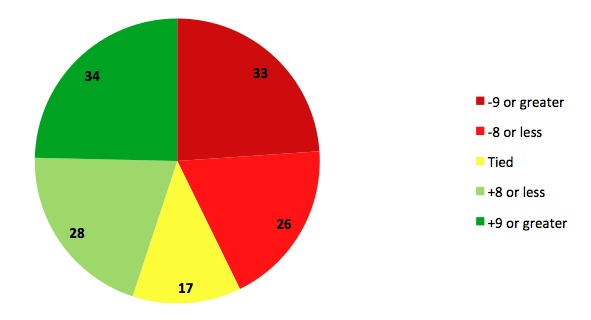 And just because I love charts, below is a quick scatter plot (this time it’s color coded to match the chart above) showing the distance and point difference combined into one.

Based on the criteria in the two sections above, it is easy to assume the leading team will go for it on fourth down in order protect a lead and a trailing team will go for it on fourth down to take the lead, but this doesn’t seem the be the case as the scatter plot graph shows. Instead, it appears that an even simpler concept determined when teams would attempt to run on fourth down: distance. In fact, the distance to go was without a doubt the single largest factor in determining when teams attempted to run on fourth down. Of our 138 charted rushing plays, 126 of them were fourth-and-five or less. Nearly 92 percent! Compare that, for a second, with our passing data where only about fifty percent of all passing attempts came on fourth-and-five or less. When we add those numbers together, the data shows that on all plays of fourth-and-five or less, there are 2:1 odds that the play called will be a run.

So, what about success? Below is a chart showing rushing success rates based on distance. As you would expect, the number of attempts dropped off dramatically as the distance increased, and only a few teams were daring enough (or stupid enough, you be the judge) to run on fourth-and-eleven or more. In addition to being quite successful on the few instances we have of rushing on fourth and long, I was surprised to see that the teams weren’t the flashy or dynamic running teams like Oregon, but instead teams like Washington State, Alabama, Arizona and Georgia Tech.

To even a causal football fan, the chart above should not be surprising. Fewer teams are willing to risk running on fourth-and-five, but many are willing to pound out a yard or two on fourth-and short, banking on superior athletes, timing, a hard snap count, or scheme to provide them with the edge necessary to convert. But since we had all this data, I didn’t want the chart above to be where the number crunching stopped. I wanted to look at how successful individual offensive styles were at converting fourth down and see if certain styles were more effective than others. For the sake of brevity, I broke all plays out into six offensive types. The chart below shows those types and their relative percentage of all fourth down runs. Note that in this article, “traditional” running plays constitute all other running plays (i.e. single back, “I” formation, etc… regardless of whether the QB is under center or in the shotgun).

I will admit that the data for Zone Read, Reverse, and Scramble are incomplete and therefore inconclusive, but it was interesting to note the success rates of our two largest segments: QB Sneaks and traditional running plays.

Notes: 100% success rate at one yard, and nearly all unsuccessful beyond. Most attempts by Georgia Tech (5), longest successful play by Navy vs Arizona State. 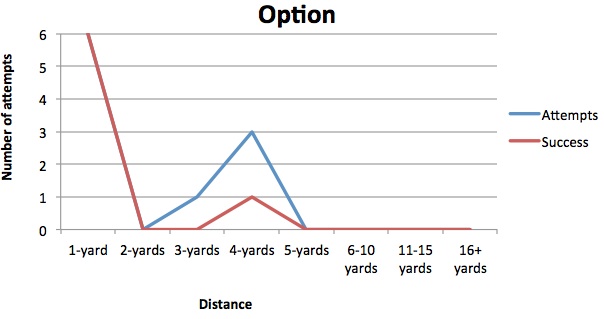 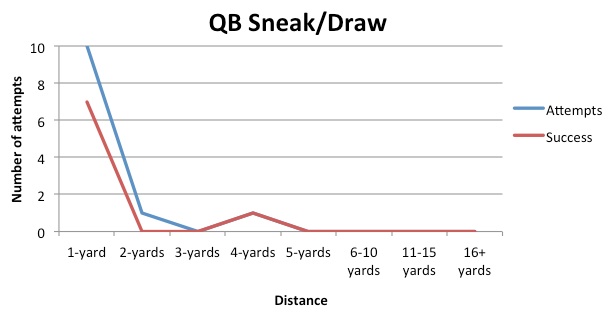 Notes: Only attempt conducted by USC vs Syracuse, not a large enough sample size to draw conclusions. 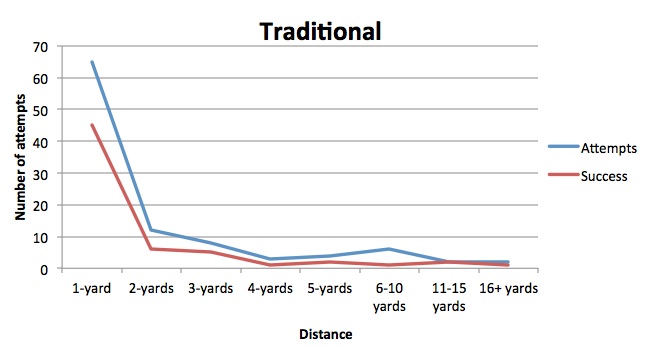 Notes: Most charted attempts by Oregon (3), and longest successful attempt by Oregon vs Oregon State.

Based on the six charts above, I am unwilling to claim any style is definitively more successful than the others.

To wrap up this graph-fest I’m calling an article, the data presented a few key takeaways. First, the data confirms running is the fourth-and-short play of choice, statistically speaking. At nearly 2:1 odds, offense chose run over pass on fourth-and-short. When we look at those same numbers within the opponent’s ten yard line, that ratio climbs to 3:1. Based on that, if I’m a defensive coordinator deep in my own territory, I’m expecting a run. Second, whether up by three or trailing by thirty, teams are willing to run at nearly identical rates. And those identical rates hold true regardless of which quarter of the game we’re in. Barring marginal changes, teams ran at almost exactly the same rates in all four quarters. The third and final conclusion is that no one formation or scheme appeared to be dramatically more or less successful than the others. Yes, some show much higher/lower success rates in our sample data, but with so few attempts, I’m unwilling to call what we saw a “trend.”

And finally, for those readers who slogged all the way through this article (book?) and have made it to the bottom of this page, here are a few fun facts.

Til next time, everyone!