Is the Big Ten East a Murderers' Row?

Share All sharing options for: Is the Big Ten East a Murderers' Row?

I’ve read enough lately to sense that this sentiment isn’t all that uncommon. There is certainly a perception that the new Big Ten divisions are going to be much like the old Big 12 divisions: horribly lopsided. The stats, however, don’t support this assertion.

Box plots of the 2011 and 2012 Big Ten + Rutgers and Maryland average scoring offense and defense show that there is little difference between the proposed divisions in the two statistics that are most closely correlated to winning and losing. 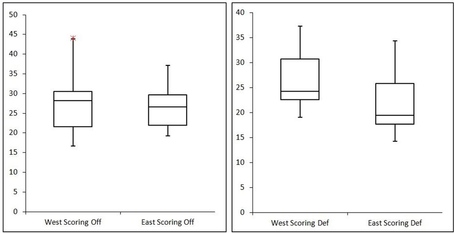 The first boxplot shows that the West Division had a slightly larger range of average scoring offense values, but the median values and second and third quartiles are indistinguishable. The second boxplot indicates that there may be a difference between the divisions in average scoring defense.

And there is this: Penn State and sanctions.

In 2011 and 2012 Penn State had two of the top seven average scoring defenses. If the sanctions and scholarship limitations produce a defense that is simply average, the marginal advantage in scoring defense that the East has now will evaporate. The difference between the divisions is that close.

Putting Michigan, Penn State, and Ohio State in the same division might appear to be creating a "Murderers’ Row" division, but the numbers don’t support that. As things stand at the end of 2012, the Big Ten maintained a reasonable level of parity. Geographic alignments make a lot of sense, especially when they result in two relatively even divisions.

The Big Ten got it right this time.