A look at the tempo trend in college football.

Share All sharing options for: Tempo in college football

Tempo is increasingly becoming an important part aspect of offensive philosophy. From 2008 to 2012, 63% of FCS teams increased the number of plays they ran per minute of possession. I thought it would be interesting to take a look at this subject in a few different ways:

First, I'll explain my methodology. Let's use Oregon's 2012 team as an example.

I took each program's average over this five-season period and ranked them by plays / MOP. Let's look at the fastest teams first: 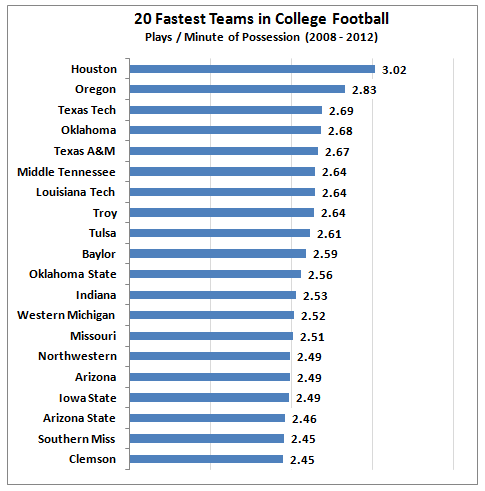 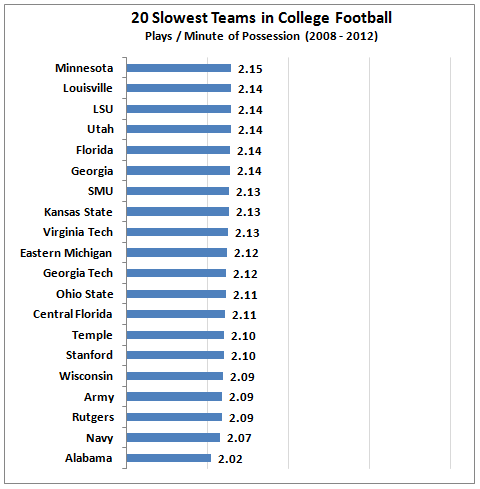 Now let's take a look at conferences as a whole. These are the averages for each conference during this five-year period: 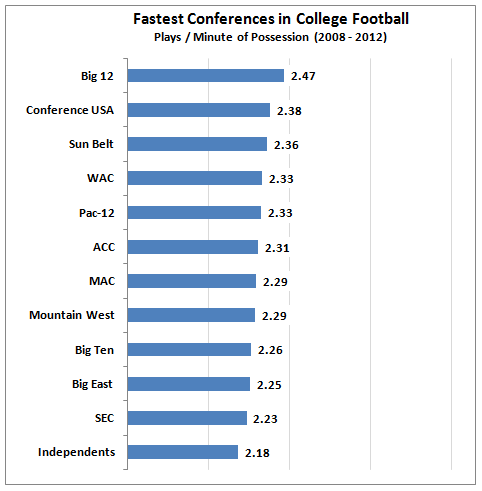 To help visualize these speed changes a little bit better, I set the NCAA's speed limit to 60 MPH in 2008. Given the percentage changes in each year, the NCAA is now driving about 63.7 miles per hour.

Now, let's look at which teams in this time period really pushed the envelope. I took a slightly different approach here. It's not fair to compare a team in 2008 against a team in 2012 straight up...as I demonstrated above, all of college football is faster now than it was a few years ago. So I took each teams' plays / MOP figure and divided it by the league average for that season. As an example, Oregon's 2.92 in 2012 gets divided by the national average in 2012:

Using this calculation, here are the fastest and slowest teams from 2008 to 2012:

Houston ran a play every 18.3 seconds last year. That is ‘Chuck Yeager in 1947' fast. By contrast, New Mexico ran a play every 31.3 seconds. Count 13 seconds in your head and think about how much that adds up over the course of a game.

There are plenty of coordinators out there promising to push tempo even more next season, so it will be interesting to see how long this upward trend in tempo can last.

If you're curious about where your team stands, here are the speeds for each team in the 2012 season: 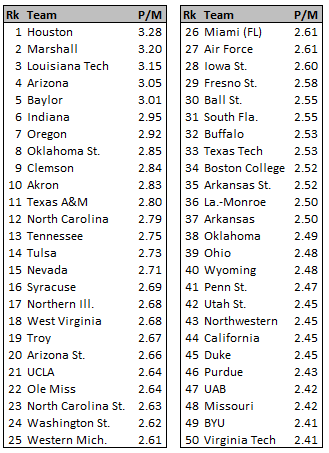 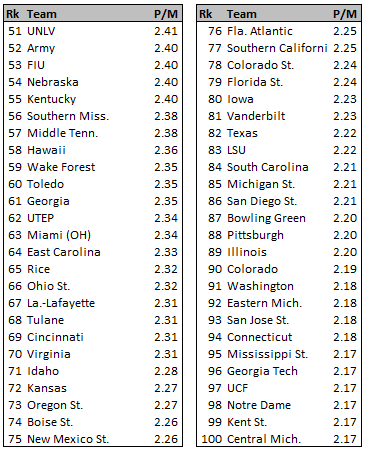