What Makes Nebraska Fans Search for Their Team on Google?

Is it possible to use to social media data to measure fan interest?

To answer this question I went to the trends.google.com and downloaded the entire search history for the word "Huskers". For this article I'm going to stick with that one search term, as I believe it is probably the most likely term Nebraska fans Google when looking for info on the Huskers. Also, the fans who are searching this term are more likely 'undecided voters' than die-hard fans. A fan who has 15 college football fan sites bookmarked or memorized would likely not be searching Google for the term.

What I got was was a week-by-week rating, with 0 being the least active week and 100 being the most, for the time period from 1 Jan 2004 to the present.

When the data is plotted it looked like a seasonal sine wave. Fan interest peaks every year at the beginning of the season and tapers off over the course of the season to a minimal interest level during the off-season. Of the 18 weeks with a relative frequency value greater than 70, 15 of them were during the first 4 weeks of the season.

A heat map of the data shows even more clearly that the weeks at the beginning of the football season generate the most interest from fans. Most years, Week 35 is the first week of the season.

A chart of the changes from week to week over the course of the season (Week 1 is the first week of the season, not Jan 1 as in the first two charts) doesn't seem to exhibit any kind of meaningful pattern. 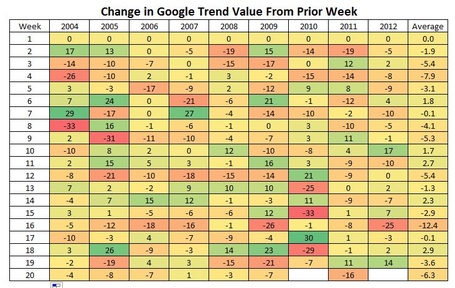 Across all years, there was a jump in search frequency for "Huskers" from week to week corresponding to Nebraska's bowl games. In 2004 and 2007, years in which Nebraska was not bowl eligible, there is no jump in search interest in weeks 18 or 19. This seems to indicate that the search frequency is related in some way to whether a team is playing that week. However, that appears to be the only signal amidst the noise here.

Does whether a team wins or loses impact search frequency, and by proxy, fan interest?

There does seem to be a correlation between search frequency and how a team is playing.

The most significant differences are visible when the search frequencies of winning and losing streaks are graphed.

From 2004-2012, the average week to week change during the football season was -2.2. When streaks are graphed, however, the average changes are drastically different. 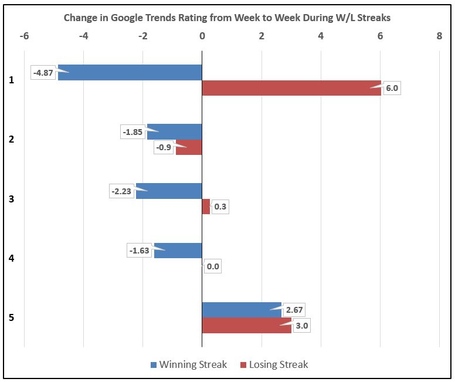 For weeks following a loss, regardless of the losing streak length, the average week to week change was less than overall average change during the football season. Only following a win streak of 5 games did the Google Trends show an average increase from the prior week.

It appears that Nebraska fans expect to win. Losing certainly seems to command Husker fans' attention more than winning. That the average change after a win streak of one game is more than twice the season average could mean that fans are content with the performance of the team.

Looking at the how winning and losing streaks are affected by the different weeks, the data generally supports the conclusion that losing arouses fans' interest more than winning. In the charts the vertical axis is the change in search frequency from the previous week. An increase from the prior week is appears above the X-axis (0.00).

For a 1-game winning or losing streak, the differences in week to week changes look like this: 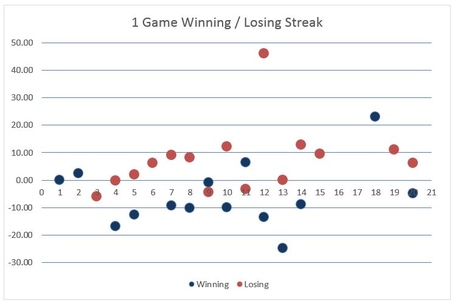 In all but weeks 9 and 11 losing resulted in a smaller decrease in frequency of the search term "Huskers" than did winning.

For 2-game winning or losing streaks the data is a bit less conclusive. For weeks towards the end of the regular season winning seems to drive fans to the internet more than losing does. For weeks earlier in the season losing results in greater search frequency. 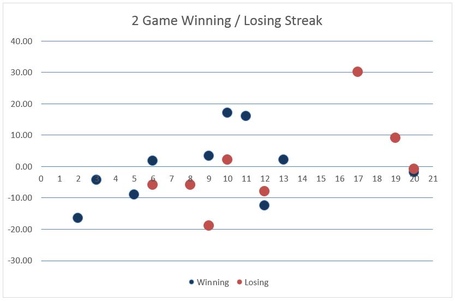 For longer winning and losing streaks, the lack of data becomes an issue, so I've combined 3, 4, and 5 game streaks. You can still see that losing appears to generate more interest than winning. For weeks earlier in the season, winning generates greater interest, but for weeks later in the season the opposite is true. 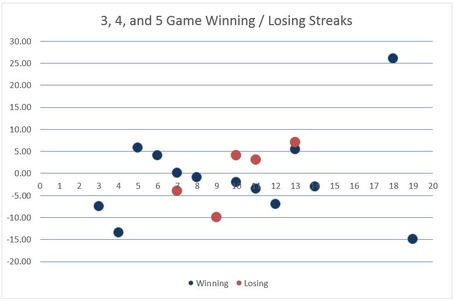 All of this seems to indicate that the Google Trends frequency rating, used as proxy for Husker fan interest, varies significantly from week to week, and is more influenced by losing than by winning.