College is starting to produce more and more of these enigmatic hybrids like Percy Harvin who don't fit the typical positional designations in pro-style offenses. Where does a talent like Tavon Austin fit on the football field?

In the week leading up to their November 17th showdown with new conference foe West Virginia, the brothers Stoops of Oklahoma undertook the crafting of perhaps the most challenging gameplan to that point of the season: how to stop Tavon Austin.

Coming back to Oklahoma for the 2012 season, Mike Stoops approached the rapidly evolving spread offenses of the Big 12 differently than his predecessor and former partner Brent Venables. Right in discerning that offensive coordinators were scheming to create matchup advantages for their best players, usually explosive players like Austin, Stoops responded by trying to build a relatively matchup-proof defense. His plan was to use man coverage to deny easy throws to blazing receivers and use his experienced safety tandem (Tony Jefferson and Javon Harris) to clean up completed passes and runs.

In order to successfully play man coverage against Big 12 teams that frequently played four wide receivers, Stoops had to play Nickel/Dime defense extensively so that he could match speed with speed and avoid compromising his safeties' run support with the need to help linebackers cover slot receivers.

However, when it came to matching up his personnel against Tavon Austin, Stoops made a category error, an error that much of the football commentariat and even Austin's coach, Dana Holgorsen, had been making. He classified Tavon Austin as a wide receiver and gameplanned to keep him matched up against a defensive back.

Much of the football world has become overly caught up in formations and positional definitions to the point that we've lost sight of what it means to be a "receiver," particularly in contrast to what it means to be a "running back." Consider the designation of "fullback." At one time this player was lined up "fully" behind the QB in the offensive backfield. Today, when we think of fullbacks we think of squatty blockers that crouch in front of the running back and lead the way for him. We could really stand to create new terms for many of these positions.

Spread offenses have particularly wreaked havoc on football's classic terminology and positional duties. What position would we say Tavon Austin is playing here? 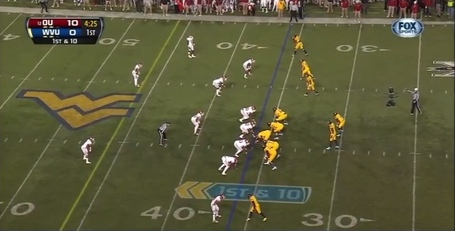 Technically since he's out "wide" (third from the top) and perhaps most likely to obtain possession of the ball via a toss from the QB, we call him a wide receiver. Yet in defensive terms, as the no. 3 receiver from the sideline, he's assigned to a linebacker in most coverages like a running back would be.

The real key in evaluating the essence of a position is this: What is the main occupation and skill required to be a receiver? I would argue that a receiver's primary talent needs to be in presenting targets for the Quarterback that will lead to scores. The emphasis is on receiving, the primary skill set is in how the player obtains possession.

Tavon Austin is a solid receiver. By virtue of his ludicrous speed (4.28 40 time), he can cut in and out of breaks with terrifying quickness and precision. However, he's also about 5'8" and easy to jam or cover up with taller, more physical players. West Virginia QB Geno Smith often had to be especially accurate to hit the windows downfield that would get the ball in Austin's hands. In particular, one of Austin's best routes was to break outside after running up the seam as an inside receiver.

Defenders struggled to prevent Austin from getting separation on his break, but the resulting window and outside throw that Smith would have to make was difficult and fraught with peril. Here's an example of Austin running an out route matched by Oklahoma's dimeback Julian Wilson, a versatile 6-2 player. 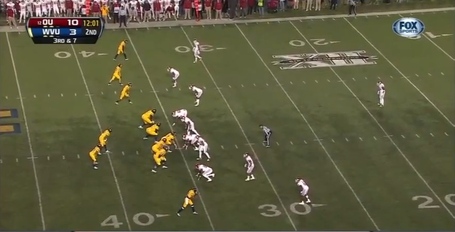 Austin is no. 3 from the top. It looks like Cover-1 coverage by Oklahoma, but Wilson's inside leverage on Austin says something else. 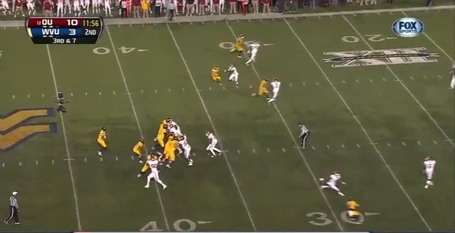 Austin begins by attacking the seam, and since Oklahoma is actually in Cover-2, Wilson has to protect the seam and force Austin back outside. 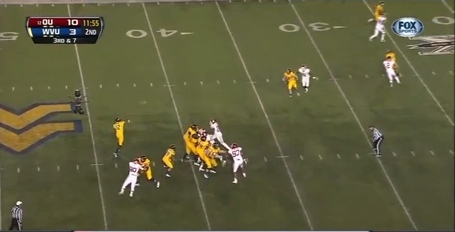 Austin breaks outside and Geno is already delivering the ball with Wilson trailing behind. 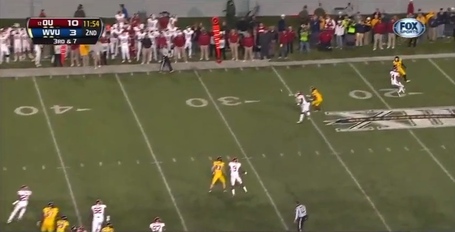 Wilson's length almost deflects the pass, while more awareness from #14 Aaron Colvin could have lead to a big hit or play on the ball from behind as well.

Quarterbacks like Peyton Manning and Tom Brady can routinely make these throws, but hitting small windows to the outside to short receivers is not a great gameplan for sustainable success in the NFL and just barely beats the strong OU secondary here.

Conversely, what are the defining features of a running back? Primarily, his skill with the ball already in his hands. Most plays that feature the running back don't require a great deal of effort to get the ball into his hands. Instead, they focus on setting him up for success after the delivery has been made.

The innovation of the spread is that, more than setting up the ball-carrier with running lanes created by blocks, they set him up with space in which to operate. Spreading out the defense helps an offense pinpoint where the defense is poorly aligned or leveraged and susceptible to being flanked or over-stressed. In particular, the spread really challenges the edge where corners have to balance the responsibility to prevent deep passing plays with the almost contradictory responsibility for not allowing someone like Austin to make an easy catch and run.

In adherence with Mike Leach's guiding wisdom of "throwing it short to people who can score," up to November 17th Holgorsen had utilized Austin mostly with screen passes, shallow crossing routes, sweeps, and other short passes that could easily be completed and caught. From there, Austin would put his real skill to work.

At 5'8", 173 pounds, Austin is a smaller man. Yet that size often has overlooked advantages on the gridiron. As a defensive coordinator can tell you, it's rare to find a corner who's 6' or taller and still possesses the change of direction and recovery speed necessary to mirror routes by receivers. While shorter legs have to work faster to cover grass, they can often allow a player to change direction and speed much more fluidly. This is where Austin excels.

NFL-laden secondaries both at Oklahoma and at LSU in 2011 frequently looked like matadors trying to corral Austin. The elite LSU secondary yielded 187 receiving yards to his quick churning legs.

Tavon Austin is really a running back. You get him the ball in a prepared setting and let him go to work. Getting caught up in whether he obtains possession through a handoff, toss, or forward pass misses the greater point, which is what comes after he has the ball.

In the week leading up to November 17th, Dana Holgorsen realized that Tavon Austin was a running back, and repeatedly got him the ball in this set up: 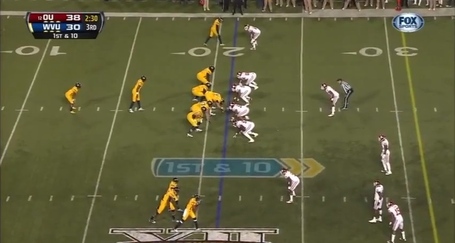 The genius of this formation is in the multiple ways it stresses Oklahoma. First you have the bunched, trip receivers set at the bottom of the screen. That presents obvious flanking and leverage problems for the defense to account for. A failure to line up enough defenders there will inevitably result in easy pitch and catch screen passes that will go for five to 15 yards a pop.

But Holgorsen left his two best players out of the bunch set. Stedman Bailey is split wide to the other side of the field and Tavon Austin is in the backfield at running back. Addressing the structural problems of the formation will probably necessitate leaving a few defenders isolated against Austin and Bailey.

Here, Stoops responds to this formation with a package often known as "the dollar" package. If a nickel defense brings in five DB's and a dime defense brings in six, the dollar features SEVEN defensive backs and, in this case, no linebackers.

In the linebacker spot is Julian Wilson, tasked with matching up Austin and ensuring Oklahoma can play man coverage without Austin ripping them to shreds. The problem is this, this isn't coverage anymore. You can't use a DB to make sure that Austin doesn't get the ball on Inside or Outside Zone, you have to beat OL blocks and take away the running lanes and space that make Austin dangerous.

OU's dollar package was completely unable to do this, and their dime defense wasn't any better. Austin showed remarkable ability to set up the second level of the defense and encourage them into one crease before darting through another and then humiliating the hapless DBs who had to run him down.

He accumulated 344 rushing yards on 21 carries (an average of 16.4 yards per carry) with another 82 receiving yards on four catches. That's 426 offensive yards on 25 touches and 17 yards per touch. Had Oklahoma played nickel defense and relied on their linebackers to close running lanes they may have had more success, although then they would have had to cover Austin or other receivers with less skilled defenders. At any rate, what they did attempt was completely useless in preventing Austin from inflicting nearly crippling damage. Were it not for West Virginia's own helplessness in stopping Landry Jones, this could have been a Heisman moment for Austin.

The NFL is slowly catching on to how to use players who excel in space that NFL offenses haven't always been geared towards creating. Today, Percy Harvin, Wes Welker, Darren Sproles, and Danny Woodhead routinely demonstrate the great value that can exist in smaller players like Austin.

The remaining question is one of durability. At 173 pounds, it probably isn't a great idea to use Austin as a feature back in the run game and risk seeing him injured. But, after moving him to running back, West Virginia managed to get Austin the ball 19 times per game without sustaining an injury. In those four games he touched the ball 76 times for 861 yards for 11.3 yards per touch.

Throughout his college career he avoided injury, probably in part because he is too slippery for defenders to make good contact. It's reasonable to believe that an NFL team could get him the ball five to 15 times per game through easy receptions, screens, runs, and perhaps the occasional deep lob. While that may seem like minimal use for a running back, if you can get 100 or so yards from a player in only 10 possessions, that's tremendous. Then there's his obvious value as a kick returner.

The key for NFL teams is that they don't diss his skillset by attempting to mold him into another Steve Smith and use him like a classic receiver. He's a running back in the truest sense, make it easy for him to get the ball and then enjoy the show.