How To Win Your March Madness Pool

A guest post by The Power Rank's Ed Feng. It is not football, but it is, to say the least, topical.

Share All sharing options for: How To Win Your March Madness Pool

It's time to fill out your bracket. With all the upsets that make March Madness so special, it might seem like numbers and analytics should take a back seat. What system could predict Lehigh over Duke as a 15 over a 2 seed last year? It seems like a better idea to revive Paul the Octopus, the famous prognosticator of the 2010 World Cup.

However, the goal is not to pick every upset. The goal is to win your pool. And analytics can give you an edge here.

There are lots of great tools out there. You may have even found our interactive bracket at The Power Rank. Based on team rankings that accurately account for strength of schedule, the bracket gives the probability for each team to advance through each round. You reveal these odds by hovering over a team name or a game node. To open this bracket in a new window, click here. 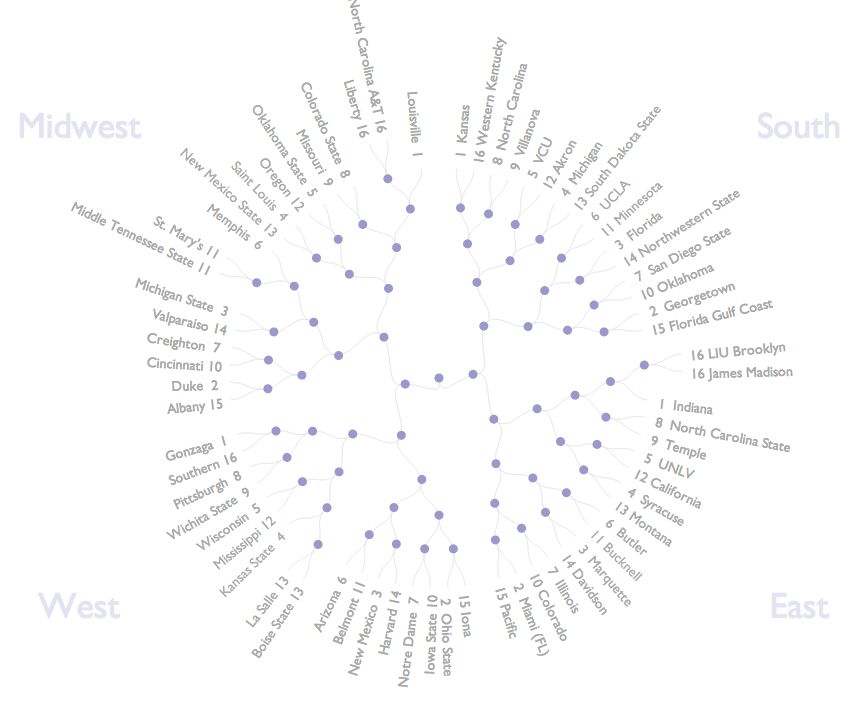 SB Nation's very own Amy Nelson made a documentary on this bracket last year. As part of the film, she asked me to fill our her bracket for the SB Nation pool. Her question stumped me, since it's not enough to just look at win probabilities, no matter how accurate they are. You need to find picks with value.

Do not pick a champion everyone else picks

In a big pool, you should never pick a champion that many others will pick. This year, Louisville looks like the top pick to win the tourney. The Cardinals just destroyed a good Syracuse team in the second half of the Big East championship game to take the top seed of the entire tourney.

On Yahoo, 28% of the brackets picked Louisville as champion (as of Tuesday morning). That's an exceedingly high fraction, especially since the Cardinals got put in the Region of Death with Duke, Michigan State and Creighton as the 7 seed. Our numbers give them a 11% chance to win the tourney.

Do not pick Louisville in your bracket for a big pool.

If they win, you will earn 32 points with many other people. Then picks in earlier rounds will determine the winner. With so many others in contention, someone will get lucky.

To understand luck in bracket picks, consider this analogy. Suppose there are bunch of drunk people in a bar. One by one, they grab a dart and randomly throw it at a dart board. In our somewhat outlandish thought experiment, they never miss the dart board but otherwise hit any area on the board with equal likelihood.

The same principle applies to tourney picks. The more people that pick the same champion as you, the more likely someone will hit bulls eye in those early rounds.

To see how this works in real life, let's look at the bracket I picked for Amy last year. Kentucky was the consensus number one team in college basketball. However, 43% of brackets on Yahoo picked Kentucky as champion, compared with the 16% chance The Power Rank gave them.

I told Amy not to pick Kentucky as champion. Of course, this didn't work out, as Kentucky won the tournament. However, had she picked Kentucky, she would have finished 4th in the SB Nation pool. The winner not only had Kentucky as champion but also North Carolina State and Ohio in the Sweet 16, two long shot picks. He or she was probably the SB Nation curling correspondent from Norway that knows nothing about college hoops.

No amount of analytics can compete with this kind of luck.

The better strategy is picking an undervalued champion. Last year, Ohio State was picked in only 4% of brackets on Yahoo. However, our numbers gave them almost a 12% chance of winning. They were undervalued by the public. Despite Amy's family ties to Michigan, I told her to pick the Buckeyes as champion.

Ohio State made a valiant run into the Final 4. However, they fell short in the national semi-final game against Kansas. The Jayhawks cemented their win when six foot Elijah Johnson somehow dropped a floater over six foot eight Jared Sullinger.

Amy didn't win the SB Nation pool. However, had Ohio State gotten past Kansas and pulled an upset against Kentucky in the final, she would have easily won her pool. No one else out of 23 people picked Ohio State as champion.

This year, Florida is the team with value. The Gators are the top team in our rankings despite their 7 losses. These losses have dropped Florida down to 13th in the AP poll, so only 2.4% of brackets on Yahoo have them as champion. However, our analytics give Florida a 11% chance of winning the tourney.

Get help filling out your bracket

If you remember anything from reading this, it should be this: Enter a pool with a small number of people. The more people that randomly fling a dart at a dart board, the more likely someone hits the bullseye. If someone invites you into a pool with 400 people, politely decline.

But even in medium sized pools, there is a lot of luck in winning. Amy's bracket from last year shows that even a good strategy does not guarantee winning.

This year, Florida is an undervalued champion pick that gives you the best shot at winning your pool. However, the Gators present a ton of risk. They shoot a lot of 3 point shots. Most nights, they shoot really well, sinking 38.1% on average. However, the old cliche "live by the 3, die by the 3" has a lot of good math behind it. The Gators need to avoid cold shooting nights or throw the ball to Patric Young more.

Do you want more help filling out your bracket? It is possible to find undervalued picks for the championship game and earlier rounds. I'll be writing about these picks in The Power Rank's email newsletter. Usually, we send an email every Friday, highlighting an insight that numbers provide into sports. It's the best weekly sports analytics newsletter out there. (Ok, fine, it's the only weekly sports analytics newsletter, but who's counting?)