The 1961 Clemson vs. South Carolina was expected to be a humdrum affair between two mediocre squads winding down bowl-less seasons. But the brothers of South Carolina's Sigma Nu fraternity had a different idea.

The Clemson vs. South Carolina series is often overshadowed by other great intra-state rivalries in college football. Yet few can boast as chaotic a contest as the 1961 meeting between the Gamecocks and the Tigers. It began with one of the most epic on-field pranks in the history of the sport and ended with fans fighting each other on the field.

Before it was all over, tobacco juice flew through the air, pants were dropped to the ankles and one man had died in the stands. And a pretty exciting football game took place as well.

But let's start from the beginning.

Under head coach Frank Howard, Clemson College had become a power in the 40s and 50s. Between 1956 and 1959 his Tigers had claimed three Atlantic Coast Conference championships but fell to fourth in the conference in 1960 with a 6-4 record. South Carolina was led by first-year coach Marvin Bass. The Gamecocks had seen success under previous coach Warren Giese but his unsatisfying 3-6-1 record in 1960 resulted in his departure.

Neither team had seen any type of resurgence as the 59th edition of the rivalry game approached. After almost two months of football South Carolina had earned an uninspiring 2-5 record and Clemson's was scarcely better at 3-4. The hot debate leading up to the rivalry contest was the decision to move it from Thursday, when it had traditionally occurred, to Saturday.

More than 50 members of the South Carolina's Sigma Nu fraternity decided that even victory was not enough.

"Another losing season was upon us, so what the hell?" recalled prankster Theodore Kohn. "The question was, how could we save the season?" 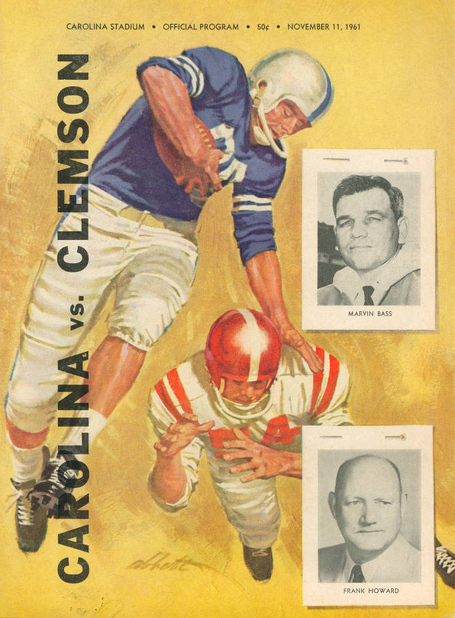 The answer was an elaborate pre-game caper to lampoon their in-state foes -- a scheme that became possible when South Carolina coach Marvin Bass gave his approval after fraternity members sold it to him as "good, clean fun." The Gamecocks coach not only agreed to allow the group to access the field before the game, he allowed them to use the team's practice field to prepare for the stunt.

Prepare they did. For three weeks leading up to the game the Sigma Nus began regular practices doing drills - running onto the field, synchronized push-ups and stretches - almost like they were preparing to play the rivalry contest themselves.The clincher for the gag was a connection with nearby Orangeburg High School's football team. The prep squad's uniforms were Clemson's orange and purple and the pranksters were able to appropriate them for their ruse.

The group had even appropriated a cow and prepared a banner to adorn the animal declaring it the Clemson homecoming queen. (The bovine never made it to the field, reportedly dying on the way to the stadium.)

On Nov. 11, 1961, with more than 47,000 spectators on hand in Colombia's Carolina Stadium the group put their plan into action. As the bands warmed up for the game the Sigma Nus suddenly came streaming out the Southeast corner of the end zone as if they were the Clemson squad.

They were accompanied by one prankster dressed as the Clemson's folksy coach complete with a pillow under his shirt to approximate Howard's girth.

The Clemson band started playing the school's fight song the team's fans began cheering for the group on the field they believed were their players. Everything seemed normal as the bogus Clemson squad assembled as if to do their warm ups. But after a few minutes, the group began to display some... problems.

The punter began kicking the ball behind him, running backs were doing somersaults at the line of scrimmage and everyone wearing orange seems incapable of holding onto the ball. The faux Frank Howard began spitting massive spurts of tobacco juice just about everywhere.

Finally the whole group gathered in the end zone to perform "the most prissified dance you've ever seen" according the participant's accounts.

Clemson fans realized the ruse and were not particularly happy about it. A group of Tiger fans clambered onto the field to confront the pranksters and then South Carolina fans descended to confront them. The result was a melee that took officials half hour to calm. The faux Clemson team and their "coach" were able to escape to an equipment closet under the stadium relatively unscathed. 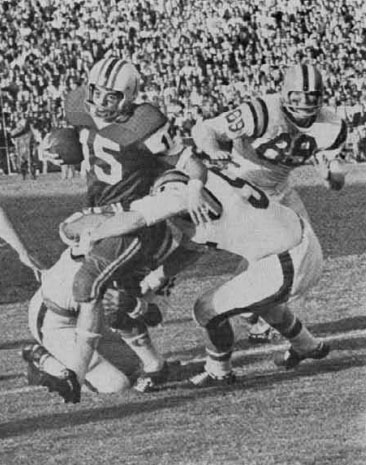 Clemson wouldn't find revenge on the gridiron. The Tigers fell to the Gamecocks 21-14 when South Carolina's Jim Costen scooped up a teammate's fumble and dashed 28-yards for the winning touchdown. Clemson took the ball 74 yards in the final two minutes of the game but a Gamecock goal line stand as clock ran out preserved the South Carolina victory.

The roller-coaster conclusion to the contest proved too much for one South Carolina fan who died of heart attack in the stands as time expired.

The final whistle didn't bring the drama of the day to a close. The pre-game brawl was matched by another after the final whistle with fans fighting on the field for more than half an hour after the game had ended. At one point, one unfortunate combatant lost his pants and was then drug along the ground with them wrapped about his ankles.

The day after the game, a police officer appeared at the Sigma Nu fraternity house summoning Gray for a meeting with William Patterson, the school's chief administrative officer. The fraternity member "spilled his guts" and awaited the pronouncement of punishment.

"Dr. Patterson listened, then sat there and looked at me for what seemed like 10 minutes," Gray recalled to The State newspaper years later. "Then he said, ‘That was pretty funny, but don't do it again. Now, get out of here.'"