The Historical: The 1936 Army vs. Navy Game and The Defensive Pass Interference Rule

In 1936, Army and Navy faced off in Philadelphia in front of the largest crowd to ever attend a football game up to that time. The end result was an officiating controversy that changed the rules on defensive pass interference.

Share All sharing options for: The Historical: The 1936 Army vs. Navy Game and The Defensive Pass Interference Rule

It happens every Saturday of the season. A football falls incomplete with an offense and defensive player hotly contesting the pass. You hold your breath for a moment and wait to see if the yellow flag will come flying across the corner of the screen. If it does not you invariably will hear the announcer note that "the defender just as much right to the ball as the receiver" while the replays show the incident over and over and over.

That wasn't always the case. And it took a controversial call in one of the biggest games ever played for the rules to be changed so it was.

But let's start from the beginning. Debating the origin of the forward pass is a favored pastime of gridiron historians who don't seem in any hurry to find the actual answer. What seems clear is that in 1906 the play was legalized (with very specific limitations) partially due to the lobbying efforts of coaches like John Heisman. This came about in an effort to "open up the game" and reduce the number injuries caused by to "mass plays" along the line of scrimmage. (It also proved to make the game much more spectator friendly and bolstered the appeal of the already popular sport.)

The rules were further liberalized in 1912 and the size of the ball was decreased to make it easier to be thrown. As a result several teams began to use the strategy to great success, most famously the 1913 Notre Dame squad. Further refinements to the rules and the change in the shape of the ball in the 1920s made the forward pass an accepted part of the game.

In 1934 the rules committee made two major changes which made the forward pass more attractive to offenses; it eliminated the rule that levied a five yard loss for a second incomplete pass in any series of downs and, more importantly, struck down a loss of possession for an incomplete pass in the end zone. The changes paved the way for more pass attempts, particularly for touchdowns, but there was a problem. There still existed a rule that penalized any contact the defender might have with the receiver on a play. The penalty would give the ball to the offense at the spot of the foul or, if it occurred in the end zone, at the one-yard-line. In both cases, the offense would be given first down.

Almost immediately it became apparent that rule gave offenses a decided advantage since it restricted the defender's ability to contest a pass, not to mention the effect on touchdown passes. Moreover, canny coaches instructed their receivers to initiate contact with defenders in order to get a favorable call from the refs.

The issue came to a head on Nov. 28, 1936. The biggest game of the year, the annual Army vs. Navy clash, was even larger due to a venue change. The game was held in the newly completed Memorial Stadium in Philadelphia with a then-unheard-of capacity of 102,000. Despite the bitterly-cold late-November weather, the game was a sellout making it the largest crowd to witness a football contest up to that time. 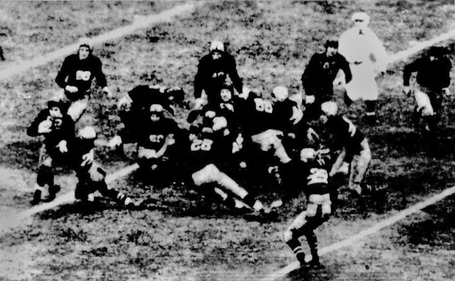 The game was scoreless through three-and-a-half quarters. Most observers agreed Army had seemed to have the better of the battle but fumbles had stymied the Cadets' efforts to mount a scoring drive. In the last five minutes, Navy recovered the fourth Army fumble of the afternoon on their own 27-yard-line.

A few plays later Army's Jimmy Schwenck batted down a pass from Navy's quarterback Bill Ingram but field judge E.E. Miller ruled it was illegal interference. The call gave the Middies the six yards and kept the drive alive. Navy continued down the field and reached the 17-yard-line. From there Ingram threw a pass to receiver Bob Antrim on the goal line. The ball bounced out of his hands and into the arms of an Army player.

At first the referee seemed to place the ball as if there was a change of possession but the field judge overruled him and, once again, declared it to be pass interference by Army's Henry Sullivan. Instead of a turnover, the Midshipmen had the ball on the three-yard-line with four downs to try and score. Navy's Sneed Schmidt plunged into the line twice to no avail but on his third attempt he was able to cross the goal line. With a successful point after kick Navy led 7-0 and that would prove the final score.

The controversy over the final interference call had begun almost before the final whistle. Many fans recalled the Army vs. Notre Dame game the previous season that had ended in a similar manner. According to the Associated Press the outcome of no less than 20 college games during the 1936 season had been affected by similar pass interference calls including Princeton vs. Dartmouth, Washington State vs. California and Michigan State vs. Boston College.

When American Football Coaches association met the following February, the interference rule was the main order of business. (Another controversy for the committee to handle that year was the legality of "accidentally" kicking a loose ball down the field which had clouded the outcome of the Yale vs. Navy game the year prior.)

The association's rules committee agreed to change the wording to the pass interference rule to state: "Defensive players have as much right to the ball as the eligible opponents, and bodily contact, however severe, between players who are making a 'bona fide' attempt to catch the ball shall not be construed as interference."

"We think the supplemental note will make it plain to officials that no matter how much bodily contact there is it still doesn't have to mean interference," said rules committee member Harry Kipke of Michigan.

Coaches almost uniformly welcomed the new rule saying it clarified the infraction for officials. Yet the twice-burned Army coach Gar Davidson remained skeptical of how much good the rule change would do since it "still fails to state just what type of bodily contact constitutes interference."

The rules committee of the NCAA later approved the coaches' recommendation and altered the rule to the new wording.