BCS Realpolitik: You will know Florida State by the trail of blood

Share All sharing options for: BCS Realpolitik: You will know Florida State by the trail of blood 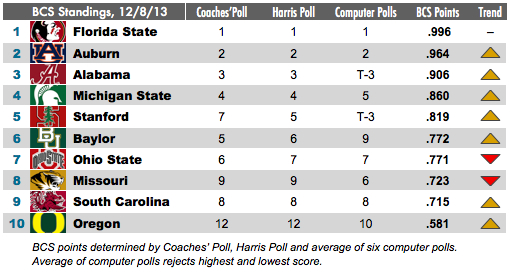 Florida State opens as a seven-point favorite here, and my initial thought after watching Auburn's defense in the SEC championship game is it's going to be a lot worse than that. Although the numbers haven't been updated yet, Florida State entered the weekend ranked No. 1 nationally in both Offensive S&P+ and Defensive S&P+, and there's no reason following a 45–7 obliteration of Duke to expect them to drop on either front. (The Blue Devils didn't score until their final possession of the game, with 1:01 to play.) In fact, the Seminoles end the regular season dominating in historic fashion: 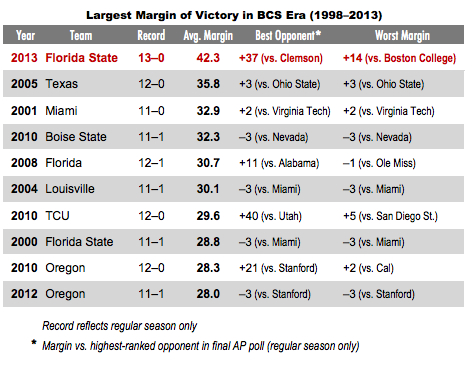 Say what you will about FSU's strength of schedule – and Ess-Ee-See supremacy theorists certainly will – but you won't find a modern team that's handled any schedule with greater ease. You have to go back to the 1995 Nebraska Cornhuskers to find the last I-A/FBS team that beat every single opponent by at least two touchdowns, and all the way back to World War II to find an outfit that blew the doors off by 40 points per game. That level of superiority is special. On paper, I'd go as far as to say this is the most lopsided championship mismatch since the 2001 calamity between Miami and Nebraska, at least. 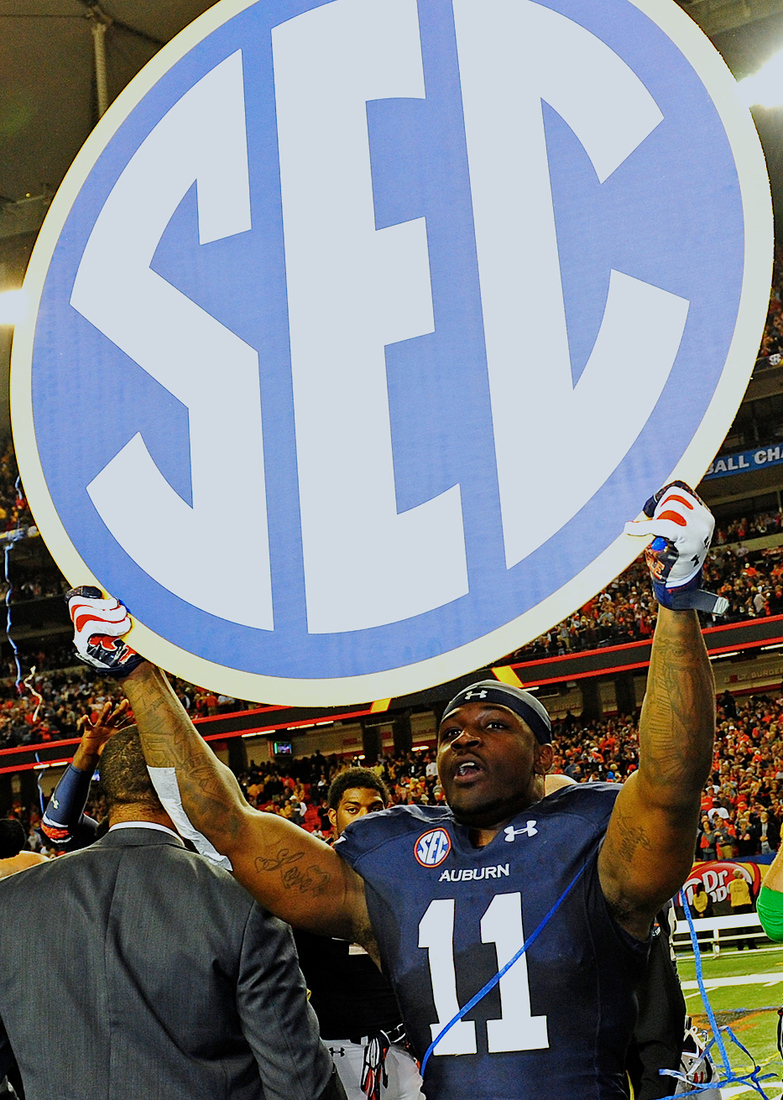 But you know, that's why they play the games. Auburn is vastly improved since its only loss, a 35–21 decision at LSU on Sept. 21, and should come closer than anyone the Seminoles have seen (including Clemson) to matching their raw talent level, blue-chip for blue-chip. The Tigers have proven they can run consistently against top-shelf defenses, and can certainly get after the quarterback on obvious passing downs. We've seen upsets of this magnitude before, by Ohio State (over Miami) in 2002 and Florida (over Ohio State) in 2006, and we've just seen Auburn dispatch two top-five opponents in consecutive weeks. Anything can happen on one night, after a 28-day layoff. But in this case, an Auburn upset falls in the outer reaches of the definition.

The Spartans haven't had much use for drama, except as it concerns their ascendency into the national elite: As of Nov. 1, Michigan State had yet to play a game as a ranked team, having just snuck into the AP poll for the first time this season (at No. 24) following a 42–3 romp over Illinois. (Even Auburn's rise wasn't that steep: The Tigers entered the poll for the first time a week earlier, just in time for their season-turning comeback at Texas A&M.) Quietly, though, all twelve of MSU's wins have come by double digits, and the Spartans are arguably a bogus pass interference call away from playing FSU in the big one themselves. They've already set the school record for wins in a season; with one more, they'll finish with a conference championship, a Rose Bowl victory and a top-five ranking for the first time since 1953. It's not inconceivable they could rise from unranked to No. 2 in the nation in a span of six games.

Stanford, of course, has been on the Rose Bowl return track from day one, and despite its apparent enthusiasm has to be suppressing a case of "always the bridesmaid, never the bride." With four consecutive big-money bids since 2010, the Cardinal are owners of the longest active BCS streak, as well as the longest streak in Series history without cracking the championship game. This year, with four victories over teams that finished in the BCS top 20, Stanford boasts arguably the most impressive resumé anywhere in terms of quality wins, including a physical mauling of Oregon that ranks alongside Florida State > Clemson, Oklahoma State > Baylor and Auburn > Alabama as the most impressive performance of the season. (Elsewhere, South Carolina has three top-20 wins; no one else has more than two.) But the Cardinal were also one play away from securing a golden ticket in losses to Utah and USC, the second year in a row they've let one of the title game slip through their fingers against an obviously inferior opponent on the road. For now, the program is still close enough to the pre-Harbaugh doldrums to know better than to take conference championships for granted. Once the playoff is in full effect, though, I suspect there will be less patience with consolation prizes.

All I have to say here is thank god for Bowling Green. While this is not the long-awaited Alabama–Oregon showdown of our dreams, Alabama–Oklahoma is vastly more attractive than the alternative, an inevitable massacre by the Crimson Tide over Central Florida, which would have become a reality if not for Bowling Green's upset over Northern Illinois on Friday night. With that, NIU plummeted into a Poinsettia Bowl date with Utah State, UCF slid down a spot in the BCS pecking order (see below) and the Sugar was able to salvage something resembling a heavyweight bout after the Sooners' upset over Oklahoma State.

Or, you know, something like that. In fact, if you go by Jeff Sagarin's "Predictor" rating, Alabama is probably going to open up as roughly a two-touchdown favorite over OU, one of the most out-of-nowhere BCS choices in recent memory. Before Saturday, projections unanimously accepted Oklahoma State as the automatic rep from the Big 12, and left Baylor and Oregon to lobby for the last spot if Northern Illinois bit the dust in the MAC. When the Cowboys and Huskies lost, suddenly an Oklahoma outfit that had finished on a three-game winning streak with a dramatic upset over its biggest rival looked a lot more attractive than the Ducks, who were trounced in two of their last four and didn't look much better in a come-from-behind, one-point escape over flailing Oregon State. (In that respect, at least, I'm relieved Oregon isn't being shoehorned into a defining measuring-stick game with a team that has so clearly regressed over the past month, to say nothing of the past year.) As of Saturday, the Sooners seem to be going in the opposite direction despite a) Going 59 minutes without an offensive touchdown against OSU, and b) Ending the regular season with an even murkier quarterback situation than they faced in the beginning. Check back on Jan. 2 to see where that optimism stands at halftime against the Crimson Tide.

It's been a rough decade for the Orange Bowl, which hasn't been relevant or entertaining in years: Since hosting USC's championship blowout of Oklahoma in 2005, the game has featured exactly one matchup of top-ten teams (Virginia Tech vs. Kansas in 2008), and six of the last seven have been decided by double digits. The most dramatic moment in that span is probably Iowa QB Ricky Stanzi telling a national TV audience in 2010, "If you don't love it, leave it." In that context, Clemson–Ohio State is a borderline blockbuster, even if neither team won its conference and both teams lost their last game to opponents who subsequently rank higher in the final standings. In Clemson and Ohio State, the Orange has two name-brand powers that spent the entire season in the top ten – as late as mid-October, both were in the top five, conceivably on track to square off in the championship game – and boast a pair of prolific, franchise quarterbacks opposite hot-and-cold defenses that ended the regular season looking fairly frigid. If all else fails, there's always the b-roll of Woody Hayes punching Charlie Bauman the only other time the Tigers and Buckeyes have played.

Whatever else there is to say about it, the meat of this game is in the quarterback duel, even if Ohio State's Braxton Miller has rarely looked more like a glorified tailback than he did Saturday against Michigan State, finishing a miserable 8-of-21 passing with a single completion longer than 20 yards. Despite the high-stakes flop in Indy, this can be a springboard game for OSU: Regardless of the outcome, the Buckeyes are loaded for another run in 2014, when Miller will (probably) be back in the fold as a Heisman frontrunner/meal ticket along with the vast majority of the starting lineup. (Clemson is in the opposite situation, sending off prolific seniors Tajh Boyd and Sammy Watkins with one more opportunity to tap their staggering potential.) There is no documented evidence to show that winning a bowl game has any effect whatsoever on the subsequent season, but it certainly makes a difference in the preseason rankings, which Ohio State has learned can wind up making all the difference in the world.

The Fiesta drew the short straw, leaving it with no choice but to award the final ticket to the BIG AMERICA champ, Central Florida, a team with wins over Memphis, Temple, South Florida and SMU by a combined 17 points. (In the first three of those games, UCF trailed all three in the final five minutes.) Still, at 11–1, the Knights are almost certainly better than they're going to get credit for: With wins over Penn State and Louisville and no embarrassing defeats – despite the close calls, their only blemish is a 28–25 loss against South Carolina on Sept. 28 – they're on much sturdier ground than Louisville was at this time last year, when the Cardinals made the Sugar Bowl as Big East champs after losing two of their last three to Syracuse and UConn. From there, they ambushed Florida in the biggest upset in BCS history, propelling Louisville into the top ten to open this season and QB Teddy Bridgewater to the top of draft boards everywhere. Blake Bortles making his move in a shootout with Bryce Petty wouldn't be nearly as surprising.

Even as a prohibitive favorite, though, Baylor is breaking new ground, too, having already set a school record for wins (11) while clinching its first outright conference title/January bowl bid since 1980. The best poll finish for Baylor is ninth in 1951, secured before a loss in the Orange Bowl. In the intervening 62 years, the Bears have only landed in the final polls nine times, only once (in 2011) since the Southwest Conference dissolved into the Big 12. In many respects this is already the best season in Baylor history, just in time to exploit a relatively down year across the conference. If exploiting a relatively favorable matchup is what it takes to end any debate, it's no less of a milestone.