How do the 2013 BCS contenders stack up with previous title game participants?

Comparing this season's BCS contenders to those of previous years.

Share All sharing options for: How do the 2013 BCS contenders stack up with previous title game participants?

Only five teams have a legitimate shot at the BCS title. These teams only care about how they stack up against their next opponent (save Alabama, who is presumably still staring at the wall in the visitor's locker room in Jordan-Hare ... seriously, has anyone checked on Bama?), but as fans it's always interesting to see how this year's crop of contenders stack up against history. 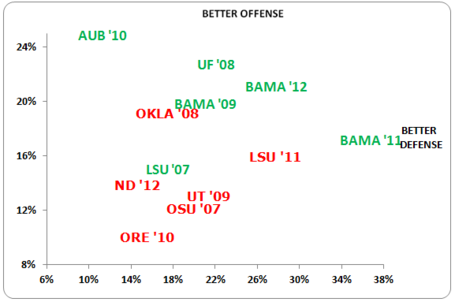 Just to make sure we're on the same page: Auburn in 2010 had an incredible offense -- the best among this group of BCS participants -- but they also had the worst defense in the bunch. Meanwhile, Alabama's 2011 team had the best defense in this group by quite a wide margin.

Now let's add in the 2013 contenders to see how they stack up: 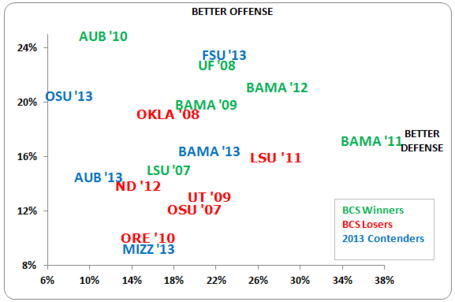 Florida State fits in really well with the previous title winners. Their offense is the second-best in this group of 17 teams, second only to Cam Newton's team. But the FSU defense is also quite good - fourth in this group.

The good news for Ohio State is that Auburn '10 proved you don't need to have an elite defense to win it all. The Buckeyes would have the worst defense by a BCS title game participant since 2007. The bad news is that the Buckeyes (if they win the Big 10 Championship game) will likely be matched up against one the best offenses we've seen in recent history in the BCS title game, assuming Florida State takes care of Duke.

Auburn and Missouri will battle it out for the SEC title and hope for a loss by either FSU or Ohio State. Mizzou would have the worst offense by a BCS title game participant since 2007, while Auburn is most similar to the Notre Dame team that didn't belong on the same field as Bama last year.

According to F/+, Alabama's team is not as good as any of their previous title contenders. Still, they are right in the middle of the pack in this group of teams -- not a bad place to be.

Let's look at where each team in this group of 17 stacks up in F/+ overall, F/+ offense, and F/+ defense when compared against each other. This list is sorted by F/+: 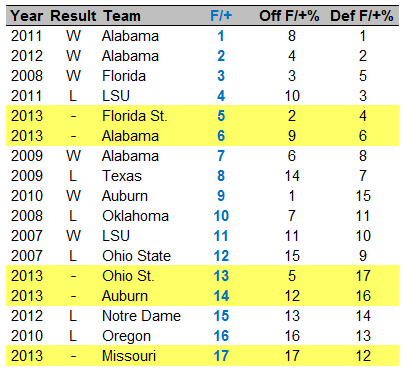