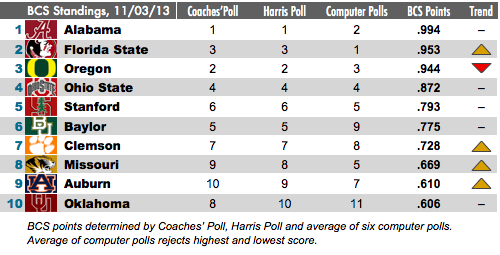 • FLORIDA STATE IS AHEAD OF OREGON NOW. Does it matter? Survey says… still no. We saw this pas de deux for No. 2 coming weeks ago, and from this vantage point it still ends the same way: With Oregon edging out a justifiably infuriated FSU to play Alabama in the championship game.

That's no judgment on the Noles, who have obliterated three ranked opponents by a combined 127 points in the last month and look every bit the equal of Alabama or anyone else. It is a judgement on the Noles' schedule over the last month, which is down to Wake Forest (4–5 overall), Syracuse (4–4), Idaho (1–8) and a fast-fading edition of Florida (4–4) coming off its third consecutive loss. The best possible opponent in the ACC Championship Game is the same Miami team Florida State just ran right out of the realm of respectability. (If the Canes hit the skids, which is very possible at this point, the door in the Coastal Division is very much open to Virginia Tech, Georgia Tech and/or Duke, which is Duke.) Not that Oregon is staring down a powerhouse from the Pac-12 South in its conference title game, but to get there, the Ducks still have to go through Stanford (7–1) in a winner-take-all blockbuster, followed by Utah (4–4), Arizona (6–2) and Oregon State (6–3). 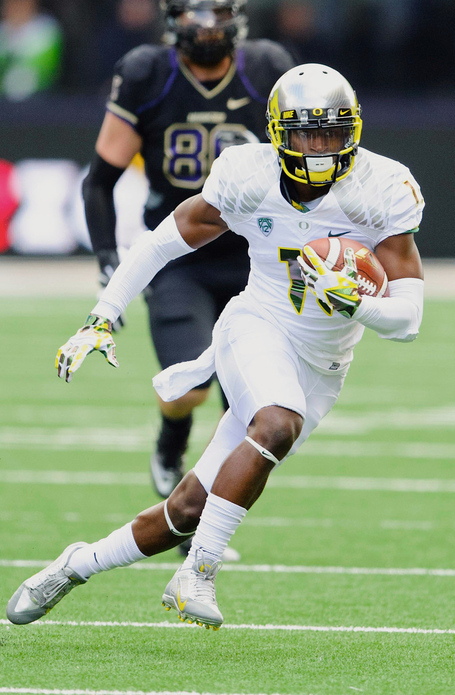 Is that a huge, decisive difference? No. But neither is the margin separating Oregon and FSU in the standings: The Noles are in front this week by all of .090 points, the narrowest gap anywhere in the top 25 except the one between No. 14 Oklahoma State and No. 15 Texas A&M, and that's with Florida State claiming the top spot in five of the six computer polls. Barring an upset, that's not going to hold. The Ducks are already entrenched at No. 2 in the relevant human polls; if they get by Stanford on Thursday night, by any margin, they'll make up more than enough ground among the algorithms to retake No. 2 behind Alabama.* From there, FSU's remaining opponents just don't have enough juice to fuel another counteroffensive.

If there's any hope for FSU beyond an outright Oregon loss, it's an appeal to "style points." Right now, both teams are winning by roughly 38 points per game, widest margin in the country, and neither has been challenged within two touchdowns. But Florida State has a much better chance of sustaining the scorched-earth routine through the finish line; if the Ducks have a close call or two after (presumably) dispatching Stanford, that could be enough for a Seminole takeover in the human polls. But the standing ban on margin of victory in the computers means even that looks like a long shot – especially given that, you know, Oregon would actually have to struggle with an inferior opponent in the first place, hardly the M.O. of an outfits that's won 23 straight against unranked teams by at least 17 points.

(* In case anyone is holding out hope for a reevaluation of Alabama's stranglehold on No. 1, go ahead and retire that thought: Even after a bye, more than a month removed from its last win over a ranked team, Bama took 149 of 167 first-place votes this week in the USA Today and Harris polls. It also has two name-brand, top-15 opponents in November, LSU and Auburn, followed by the SEC Championship Game, rendering any skepticism over the schedule moot unless the Tide actually lose. The computers may not see much difference in the top three, but the human polls aren't budging on the defending champs until they have no choice.)

• LINE OF SUCCESSION. The really fascinating question behind the Big Three is the pecking order between undefeated Ohio State, undefeated Baylor and one-loss Stanford if all three manage to run the table. At the moment, the Bears are a relatively distant third in that group due to their also-ran status in the computers, a direct result of their horrendous strength of schedule, but that changes beginning with Thursday night's visit from Oklahoma; from there, they get Texas Tech, Oklahoma State and Texas to close the season, and the SOS will be soaring. Still, the dog-eat-dog reality of the Big 12 means Baylor won't have a chance for a win anywhere near the potential value of a Stanford upset over Oregon, which would put the Cardinal's stock on a 90-degree angle, as well. And Ohio State, while lacking in marquee victims, has raised the bar for sheer carnage, firming up its hold on No. 4 at just the point in the season when dominoes tend to start falling in unexpected fashion. (The Buckeyes should also root for Michigan State to continue the path of defensive destruction it waged Saturday against Michigan, lending the Spartans some national cachet going into the Big Ten title game.)

Of course, the odds that all three will survive the next five weeks without a blemish are exceedingly small; technically, the odds are against even one of them making it through. If they do, though, by some unprecedented stroke of sanity, the tea leaves are so inconclusive that it's tempting to let "style points" do the hard part again: Baylor and Stanford may have the schedules to close on the Buckeyes in the computer polls, sure, but who looks better to the human voters? For the type of pollster who's content to turn in the same order week after week, holding firm on the winners and adjusting only for losses – which, let's face it, describes an awful lot of them – Ohio State is more than capable of passing the proverbial "eyeball test" necessary to fend off a challenge. Then again, if Baylor does to the top of the Big 12 anything in the remote vicinity of what's it's been doing to the bottom rungs, it may have the inside track. And Stanford may need to leave Oregon in a gruesome heap to convince enough voters to ignore a loss to Utah, but what if it does? The most impressive victory of the season can't be ignored, and the Cardinal get USC, Notre Dame and the Pac-12 title game in the home stretch to reaffirm it.

Obviously, they need some help. As hypotheticals go, all of the above is a lot less likely to unfold than Alabama, Florida State or Oregon losing to make way, and only Stanford has any say in that. Stranger things have happened: At this stage last year, Notre Dame ranked a distant fourth in the standings and wasn't flaunting any style points after eking out a razor-thin, overtime win over Pitt. My guess right now is that the combination of Baylor's schedule and huge margins of victory make it most likely to move into the on-deck circle, but that's only a guess, and that's assuming they don't come limping out of a string of nail-biters. Given the opportunity, the ideal versions of the Bears, Buckeyes and Cardinal all look eminently qualified for the title game, and history tells us at least one of them may get that opportunity yet. 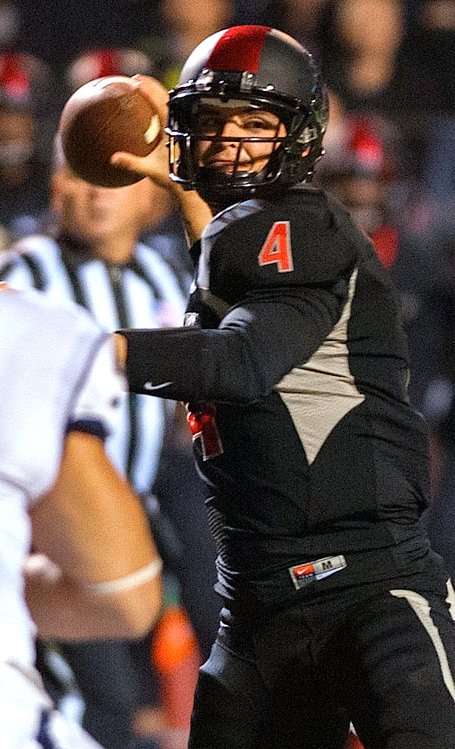 Fresno State hit the magic number again, coming in at No. 16 for the second week in a row. According to BCS rules, that's exactly where the Bulldogs need to be to earn an automatic bid – yes, automatic – as long as they remain ahead of the frontrunner of the BIG AMERICA. (At the moment, that's Central Florida, five places back of Fresno at No. 21; if UCF flubs it down the stretch, Louisville is the de facto favorite at No. 20.) Yes, we're very much aware that Fresno's most impressive victory is either a one-point win over Boise State or a one-point win over Rutgers, in overtime, and that San Diego State came within a field goal of knocking the Bulldogs out of contention two weeks ago. If pollsters are aware of it, though, they don't seem too concerned, ranking FSU 16th (Coaches) and 17th (Harris), respectively, right in line with its average in the computer polls. Again, assuming there is no abrupt, collective reassessment of the Bulldogs' schedule on the horizon, we're well past the point of wondering if they can make the cut: As long as there's a zero in the loss column, they're in, no further questions asked. Deal with it.

That goes for Northern Illinois, as well: If Fresno does bite the dust between now and December, we still have NIU on standby at No. 18, bathed in the glow of a last-second victory over Iowa and inexplicably high marks from the computers. (Like last week, there is a huge, glaring disparity in Jeff Sagarin's rankings between NIU's standing in his "real" system, 46th, and the MOV-neutral version he submits to the BCS, where NIU is fourth. Ostensibly, removing margin of victory from the equation should put a greater emphasis on strength of schedule, but this is a team whose victims boast a combined record of 12–55 against FBS opponents. Fourth! That's ahead of Ohio State, Baylor, Missouri and Stanford.) The Huskies actually moved down a spot from last week to make room for Michigan State at No. 17, but that doesn't make them any less inevitable in the MAC – with Saturday's blowout over UMass, the streak is up to 22 consecutive conference wins and counting. Unless Ball State or Toledo ends that run in the next two weeks, they're only one Fresno flop away from a return trip behind the velvet rope.

REALPOLITIK TOP TEN. Each week we take the long view to reorganize the pecking order in a more user-friendly format, according to each team's odds of actually making the championship game in January. (As opposed to where they happen to rank in a given week, which may be only a fleeting snapshot.) Projections here take future schedules and multiple possible scenarios into account. Win-loss records reflect the record necessary to fulfill each scenario. 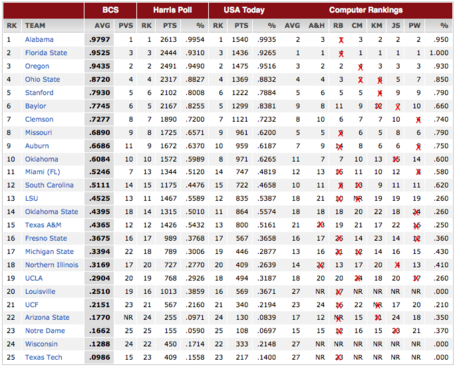