• Continuing its philosophical shift away from the "Air Raid," Oklahoma State finished with 55 carries for 281 yards and five touchdowns against Texas Tech, the second week in a row the Cowboys have kept the ball on the ground on at least 60 percent of their snaps in a Big 12 win. At any other point in the last four years, that number would have been unthinkable:

Most of the work against the Red Raiders went to tailback Desmond Roland, who had 31 carries for 96 yards and three touchdowns despite a long gain of just nine yards. But OSU also got bigger plays from backups Rennie Childs and Jeremy Smith and QB Clint Chelf, who had the team's longest run of the season on a 67-yard touchdown run.

• Michigan finished with –48 yards rushing at Michigan State, easily the worst performance on the ground by an FBS offense since Alabama held Michigan State to –48 yards in the 2011 Capital One Bowl. Most of the negative yards came as a result of seven Spartan sacks, but the actual ground game was nonexistent: The only running back who touched the ball for the Wolverines, Fitzgerald Toussaint, finished with 20 yards on a long gain of nine. 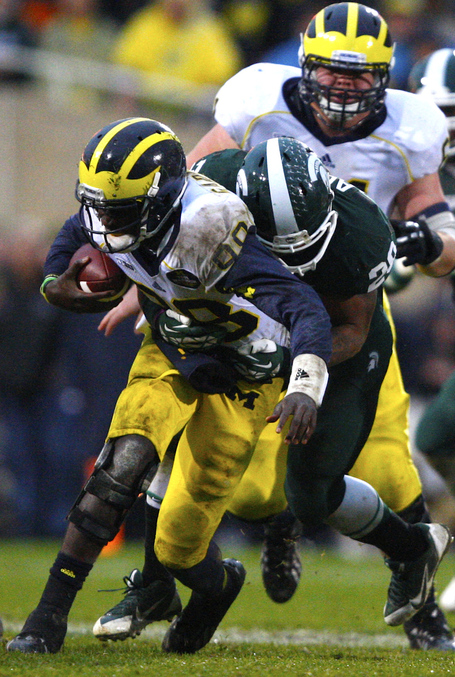 For the season, the dominant turn on Saturday improves Michigan State's run defense to 43.4 yards per game on 1.6 per carry, best in the nation by far on both counts. In eight games against FBS opponents, only one has come within 100 yards of its season average for total offense against everyone else: Purdue, which managed 226 yards against the Spartans in a 14–0 shutout.

• Pittsburgh finished with –5 yards rushing at Georgia Tech, losing yardage on ten of its 21 carries in a 21–10 loss. Against, most of the negative yards came as a result of five Yellow Jacket sacks, but running backs Isaac Bennett and James Conner contributed just 19 yards with a long gain of seven.

• Tulane led Florida Atlantic at the half, 17–7, but failed to earn a first down in the second, at one point throwing four interceptions on four consecutive passes en route to a 34–17 loss. Between them, Green Wave quarterbacks Nick Montana and Devin Powell finished 11-of-31 for 105 yards and zero touchdowns to balance the four picks, good for an astounding pass efficiency rating of 38.1. The only FBS offenses with a worse number to their credit this season are Arkansas, which turned in a 34.8 against South Carolina; Syracuse, which finished with a 35.3 against Clemson; and South Florida, which put up a 36.7 against Michigan State and still ranks dead last nationally in the category.

• Florida State picked up a first down on 11 of 15 third-down attempts against Miami, all eleven leading to points in a 41–14 blowout. Four of the Seminoles' five touchdowns involved at least one third-down conversion, including both TD drives in the first half, which required three apiece.

• Virginia Tech QB Logan Thomas accounted for 429 of the Hokies' 446 yards of total offense at Boston College, moving his share of the team's production for the season to 75 percent. (The only players shouldering a larger burden are SMU's Garrett Gilbert and Oregon State's Sean Mannion.) Thomas also accounted for four turnovers for the second week in a row, including an interception returned for touchdown in a demoralizing, 34–27 loss, leaving him with more career interceptions (38) than any active FBS quarterback with fewer than 1,200 attempts.

• TCU quarterback Casey Pachall was 40-of-58 passing for 394 yards, three touchdowns and two interceptions in an overtime loss at West Virginia, setting a new high for attempts by a Horned Frog QB in the Gary Patterson era. The last time TCU attempted more than 50 passes as a team was Oct. 30, 2001, when Casey Printers and Sean Stilley combined to go 31-of-60 in a 37–30 loss to East Carolina. 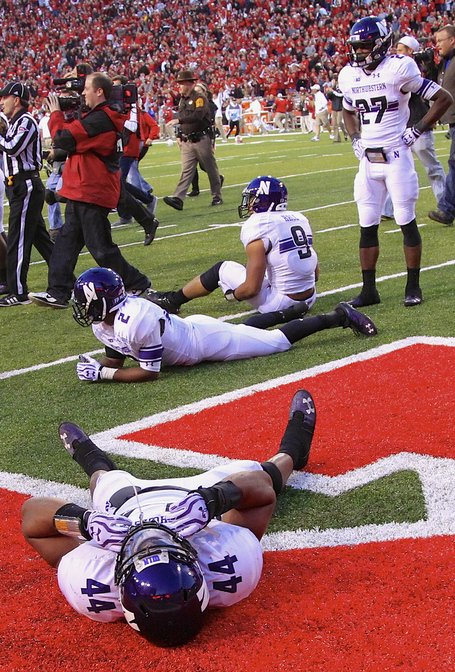 Nebraska beat Northwestern on a last-second Hail Mary despite a 21–7 deficit in the second quarter and a –3 turnover margin for the game, the second year in a row the Cornhuskers have overcome both a two-score deficit and a –3 margin to beat the Wildcats in the final seconds. In 2012, the Huskers rallied from a 28–16 hole in the fourth quarter with back-to-back touchdown drives to win; on Saturday, the defense shut Northwestern out in the second half and returned an interception for a touchdown to put the score within a miracle heave from Ron Kellogg III to Jordan Westerkamp.

• Mississippi State held South Carolina to a season-low for total offense and a single third-down conversion in Columbia, but still lost by 18 points, 34–16, after committing five turnovers and forcing none. The Gamecocks generated 20 points off MSU giveaways, three of which handed them the ball in Bulldog territory.

• Tennessee gained 334 yards at Missouri but failed to score on seven of eight opportunities in Tiger territory, producing three punts, two turnovers, two turnovers on downs and one field goal after crossing midfield in a 31–3 blowout. On the other side, Missouri finished with 339 yards rushing on 6.3 per carry, the Tigers' best total on the ground against an FBS defense since November 2003.

• Colorado State racked up 626 yards of total offense, 35 first downs and a two-to-one edge in time of possession against Boise State, and still lost, 42–30. The Rams moved the ball consistently from start to finish, but failed to score on five different opportunities in Boise territory, punting twice with two turnovers on downs and a missed field goal. The Broncos had fewer opportunities on CSU's side of the field, but scored touchdowns on five trips out of six.

• New Mexico State played arguably its best game of the year against Louisiana-Lafayette, coming out ahead in terms of total offense, turnover margin and time of possession, but still lost by two touchdowns, 49–35. Down 28–14 at the end of the first half, the Ragin' Cajuns rallied for five touchdowns in a span of 18 offensive plays in the second, securing bowl eligibility for the third time in as many seasons under coach Mark Hudspeth. 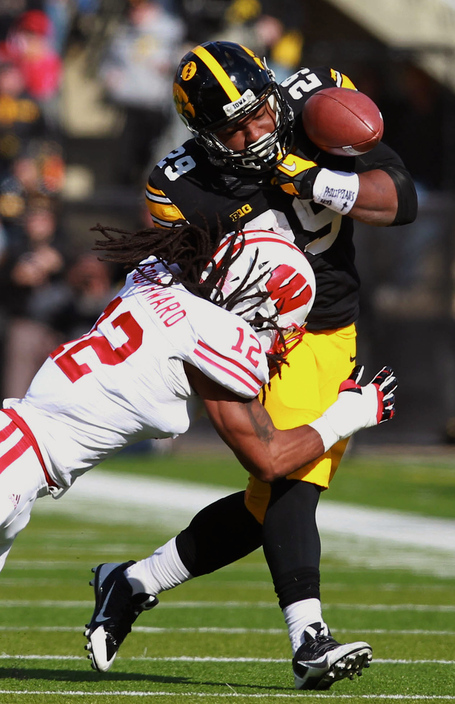 Iowa's offense had six opportunities in Wisconsin territory, but failed to score a touchdown in a 28–9 loss, the first time the Hawkeyes have been held out of the end zone in a Big Ten game since October 2011. For the Badgers, on the other hand, it was the fourth time they've held an opposing offense without a touchdown this year.

• Up by three with 8:17 to play in the fourth quarter, Georgia proceeded to put the clock out of its misery on a 15-play, 67-yard march that marked its longest drive of the season and preserved a 23–20 win over Florida. The final push began at the UGA 17 and included four third-down conversions, the clincher coming on a third-down penalty against Florida's Darius Cummings for illegal hands to the face with a little over a minute to play.

• Clemson WR Sammy Watkins had eight catches for 169 yards in the Tigers' 59–10 annihilation of Virginia, the eighth time in nine games this season Watkins has finished with at least 100 all-purpose yards. The only team to hold him below the century mark: South Carolina State, against whom Watkins touched the ball just three times.

• Penn State WR Allen Robinson had eleven catches for 165 yards in the Nittany Lions' 24–17, overtime win over Illinois, the sixth time in eight games this season Robinson has finished with at least 120 yards receiving. (One of the two games that he came up short of that mark: The Lions' Oct. 12 win over Michigan, where he had five catches for 84 yards and helped push the game into overtime with a pair of spectacular grabs in the final minute of regulation.) In the same game, tailback Bill Belton churned out 201 yards on 36 carries despite a long of just 16 yards, making him the first Penn State back to crack the 200-yard barrier since Larry Johnson in November 2002.

• Auburn quarterbacks completed eight of nine passes for 133 yards against Arkansas, the first time since the turn of the century the Tigers have attempted fewer than 10 passes in any game. (Only seven other SEC offenses have finished in the single digits in the past decade.) All but one of those attempts came from the arm of Nick Marshall, including an 88-yard touchdown pass to Sammie Coates that put Auburn up 28–3 in the third quarter, leaving Marshall with the highest pass efficiency rating this season (252.7) against an SEC defense. 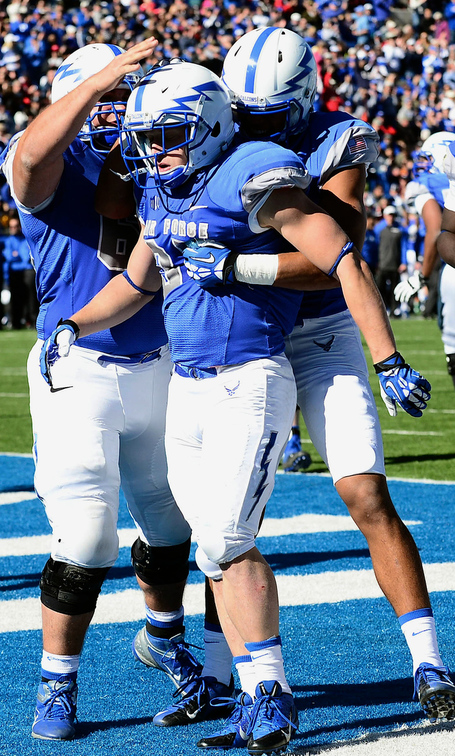 Air Force RB Anthony LaCoste finished with 263 yards on 11.4 per carry against Army, including touchdown runs covering 73 and 78 yards, respectively, in the Falcons' first win since opening day. Prior to Saturday, LaCoste's longest gain of the season was 21 yards, against Notre Dame last week.

• Navy ran 70 times for 331 yards at Notre Dame, despite failing to produce a 100-yard rusher or a single carry longer than 20 yards in a close, 38–34 loss. Altogether, the Midshipmen scored touchdowns on five of nine offensive possessions, four of them covering at least 70 yards, and racked up a 16-minute advantage in time of possession before a last-gasp fourth-down attempt came up short in Irish territory.

• Johnny Manziel matched a career high with six total touchdowns (four passing, two rushing) against UTEP, the ninth time in 22 games he's passed for three scores while rushing for another. The final score, 57–7, extended the Aggies' streak of 40-point games to twelve – the longest run in the FBS – and kept them just ahead of last year's pace for school/SEC records for total offense.

• Fresno State WR Josh Harper brought down 17 receptions for 253 yards against Nevada, the second-best total in the FBS this season on both counts. Altogether, Fresno QB Derek Carr was 39-of-55 passing for a season-high 487 yards and three touchdowns, the fifth time in eight games he's thrown for more than 400 yards.

• Toledo racked up 729 yards of total offense and scored on eight of its first nine possessions against Eastern Michigan, punting only once in a 55–16 rout. That's the sixth time in nine games this season EMU has been bludgeoned for at least 550 yards and 45 points, and the fourth in a row.

• Southern Miss allowed 636 yards and 61 points to Marshall en route to its 20th consecutive defeat, the first time in school history USM has allowed 50 points in three consecutive games. Marshall's total marked both the most points the Thundering Herd have scored in any game since joining Conference USA in 2005, and the most points Southern Miss has allowed in any game since the conference formed in 1996.