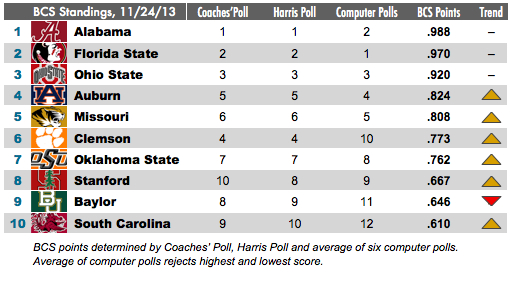 • NO SURPRISES. The status quo is the same as last week, and the week before that, only more so: Alabama and Florida State are two weeks and four wins away from punching their tickets to the championship game in the Rose Bowl, and from everything we've seen this season the only thing that can conceivably stop them is themselves. It is worth noting that Alabama's last two games, at Auburn and (assuming a win there) against either South Carolina or Missouri for the SEC crown, are vastly more dangerous than FSU's upcoming dates with Florida and whichever lamb the Coastal division offers up for ritual sacrifice in the ACC championship game. But Bama still shapes up as a double-digit favorite in both of those games, and won't see anything in either of them it hasn't seen the last two years in the exact same scenario. At no point since January have the Crimson Tide not been on track for a three-peat – they haven't trailed this year beyond the 12-minute mark of the second quarter – to the extent that their presence in Pasadena looks more inevitable by the week. 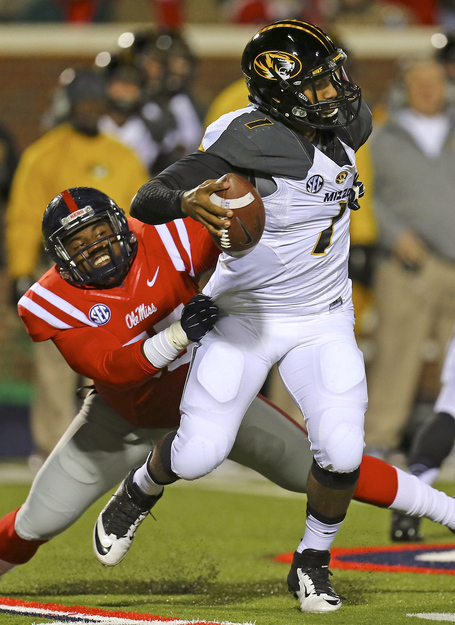 For the sake of ginning up a little drama, though, let's say a meteor strike alters the Earth's orbit just enough to cause a glitch in the Saban machine. Two of the main beneficiaries of that scenario last week, Baylor and Oregon, both plummeted in the pecking order Saturday after grisly losses that might keep them out of the big-money circuit altogether. That leaves Ohio State's face pressed to the glass from the three spot, the same as before, only now there's no buffer between the Buckeyes in the three spot and a pair of aspiring SEC heavies, Auburn and Missouri, breathing right down their necks. This time last week, OSU was certain to be jumped if Baylor took care of its business at Oklahoma State. Auburn and Missouri both close strong this weekend against Alabama and Texas A&M, respectively, for the right to play for even higher stakes in Atlanta. Is there any hope for either set of Tigers if they send Alabama packing en route to the SEC title?

SURVEY SAYS: No. Well, probably not. Right now, the margin between Ohio State at No. 3 and Auburn at No. 4 is the widest of any consecutively ranked teams in the top twenty-five. The Buckeyes have healthy cushions in both relevant human polls, where Auburn and Missouri are ranked 5th and 6th behind No. 4 Clemson, and outrank all three sets of Tigers in all six computer polls. True, Auburn and Mizzou have an opportunity to narrow the gap by racking up beaucoup strength-of-schedule points over the next two weeks. But Ohio State's SOS should be on the rise, too: Michigan, while disappointing, is certainly no cupcake, and Michigan State in the Big Ten championship game can be the big-game trophy the Buckeyes have been waiting to put above their mantle for two years. (It doesn't hurt that their first conference victim, Wisconsin, is on a steady ascent in the polls, either; neither the Spartans nor the Badgers have lost since September.) Even if some of the computers are prone to swooning over an ess ee see schedule, when it comes down to it human voters simply are not going to let a brand-name outfit like Ohio State, two calendar years removed from its last defeat, lose its seat at the table to a team with a loss. It may be thin consolation at this point, but finally the Buckeyes have the on-deck circle all to themselves.

• FOR CHAOS' SAKE. A little further down the ladder, the team that intrigues me as a potential darkhorse is Clemson. For the other one-loss contenders in the top ten, the scenarios are fairly straight forward: Keep winning, and hope like hell everyone in front of you loses. (See below.) Clemson is seemingly well-positioned in that regard, ranking fourth in both human polls, but it also faces two additional obstacles amid the chaos. One, the Tigers are the only team in the top ten with no chance to win its conference championship. And two, the frontrunner they most need to lose, Florida State, annihilated them by 37 points in a game that wasn't nearly that close. It's a safe assumption that Oklahoma State will make the leap over Clemson if it wraps up the Big 12 title against Oklahoma, too. Still, given the right set of dominoes the Tigers are not necessarily dead just yet.

Step one: Beat South Carolina this weekend, preferably by a huge margin. Step two: Watch Texas A&M beat Missouri, delivering the SEC East to the Gamecocks. Step three: Watch Carolina upset the winner of Alabama/Auburn (preferably Alabama) in Atlanta, leaving Clemson ranked ahead of every team in the SEC. Step four: Watch Oklahoma beat Oklahoma State, dropping the Cowboys from whence they came. Step six: Watch Ohio State or Florida State walk into an ambush in their respective conference championship games – at which point it gets really interesting. Say the solution to step six is an OSU loss to Michigan State; could pollsters really stomach the idea of an FSU-Clemson rematch in the BCS title game when the first meeting was such a romp? And what if step six consists of the Seminoles biting it in Charlotte in inexplicable fashion, maybe as a result of losing their star quarterback? Would voters be willing to ignore the most shocking blowout of the season to send Clemson to the Big One? Is it even possible to answer that question on this side of such an unprecedented spasm? If it gets that far, we're already through the looking glass. 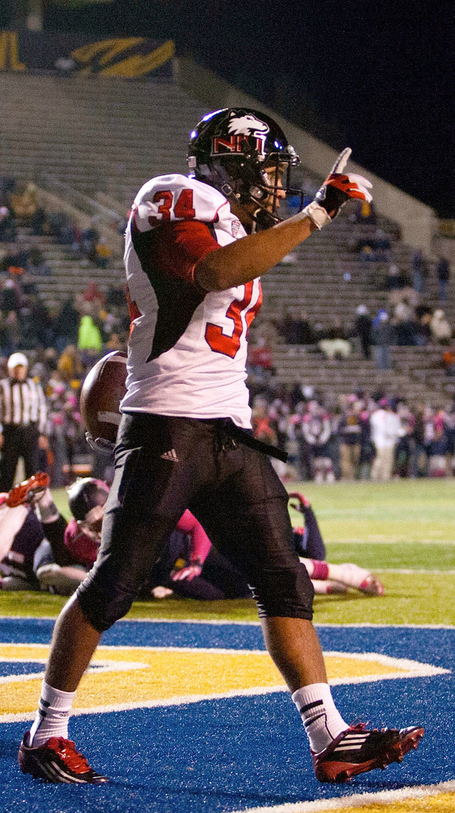 Outside of the top ten, the major development this week is a mid-major coup: For the first time this season, undefeated Northern Illinois has overtaken undefeated Fresno State, leaping from 16th to 14th on the strength of a dramatic surge in the computer polls. (Seriously, the computers love Northern Illinois, for reasons I cannot comprehend: All six rank the Huskies in the top ten, good for a consensus computer ranking of seventh – ahead of Clemson, Oklahoma State, Stanford and Baylor, and well ahead of NIU's standing in the human polls. Meanwhile, Fresno ranks no higher than 14th among the computers, coming it at 17th on average.) Assuming both close out the season with goose eggs in the loss column, the order between Fresno and Northern Illinois is significant because it will almost certainly determine which one of them is invited to a BCS game and which one can look forward to Christmas with the AdvoCare 100 Bowl. With last week's win over Toledo, NIU has 24 MAC games in a row; two more, and the Fiesta Bowl beckons.

That leaves three at-large spot remaining for everyone else, and the only sure thing is that one of them is going to go to a runner-up in the SEC. (Most likely Auburn or Missouri, although South Carolina has a solid chance if it beats Clemson – a better chance, in fact, than it would if it had to follow up against Alabama or Auburn due to Missouri going down against Texas A&M.) Clemson is a lock with a win over the Gamecocks. Baylor is in if it rebounds to beat TCU and Texas. Wisconsin is the first alternate if any of those three lose, unless Michigan State upsets Ohio State in the B1G championship game, in which case the B1G's at-large bid almost certainly lands with the Buckeyes instead; ditto Florida State in the ACC. (Both of those contingencies are most likely to come at Baylor's expense.) The second alternate is Oregon, if the Ducks are even interested.

REALPOLITIK TOP TEN. Each week we take the long view to reorganize the pecking order in a more user-friendly format, according to each team's odds of actually making the championship game in January. (As opposed to where they happen to rank in a given week, which may be only a fleeting snapshot.) Projections here take future schedules and multiple possible scenarios into account. Win-loss records reflect the record necessary to fulfill each scenario; opponents in the top 15 of current standings are in bold. 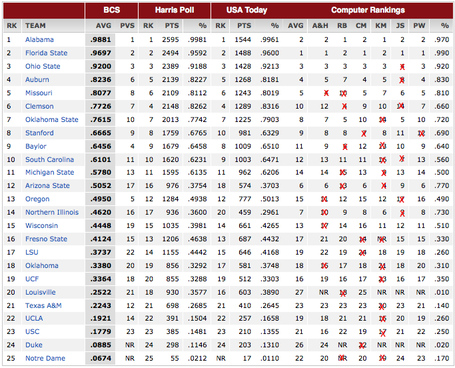 This week's most outlying effort belongs not to Billingsley, but to Kenneth Massey, who saw nearly half of his rankings for the top 25 stricken from the final record – a dozen rejections in all, twice the number of any other poll except Billingsley's, which finished a distant second with seven . In fact, that marks the most red Xs this season under any of the other five columns, cutting significantly into RB's lead in the season standings. But we're well past the point of no return when it comes to actually catching him.