Expected Wins after Week 12 and Picks for all Remaining Games

Taking a look at the model's accuracy in its first season, and how it predicts the remaining games

Share All sharing options for: Expected Wins after Week 12 and Picks for all Remaining Games

With only two weeks left in the regular season, it's time to start looking at how the model performed.

First, though, your updated expected wins after Week 12.

Generally, the model has been pretty successful at predicting the winner using a methodology of scoring offense versus scoring defense. Not surprisingly, though, it's much more accurate when the probability of win is skewed heavily towards one team.

This graph shows the average accuracy of a prediction based on the forecast winner's probability of win. 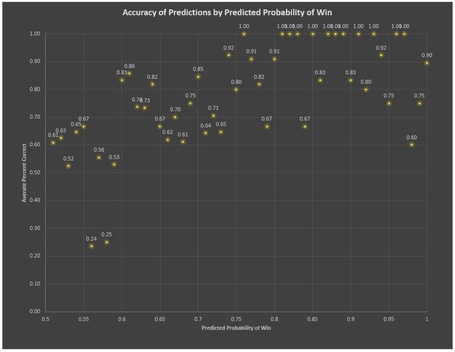 Game Projections for the Rest of the Season