BCS Realpolitik: One step closer, one step further away

Share All sharing options for: BCS Realpolitik: One step closer, one step further away 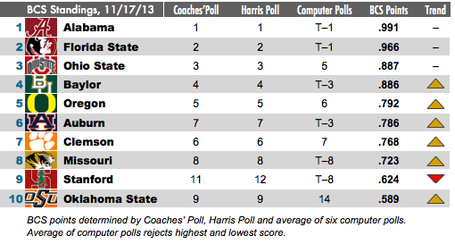 • STATUS QUO AD INFINITUM. Nothing has changed at the top, where Alabama and Florida State rank 1–2 for the third week in a row and face no threat of being leaped from below. If Bama and FSU win out they can pack their bags for Pasadena, etc. The rest is academic.

Now then. If one of the top two takes a bullet down the stretch, as farfetched as that seems, the simmering drama between Baylor and Ohio State in the on-deck circle is already coming to a boil. Last week, the line of succession came down to a three-way affair, the most likely result of which probably changed depending on your biases. (I wrote then that if I had to guess, pollsters would ultimately stick with Ohio State over Baylor and Stanford out of respect for the Buckeyes' two-year winning streak and – more importantly – their status as a perennial, name-brand contender voters are more accustomed to thinking of in championship terms.) After Stanford's oh-so-convenient flop at USC, the question is simpler, and so is the answer: The inside track pretty clearly belongs to Baylor. 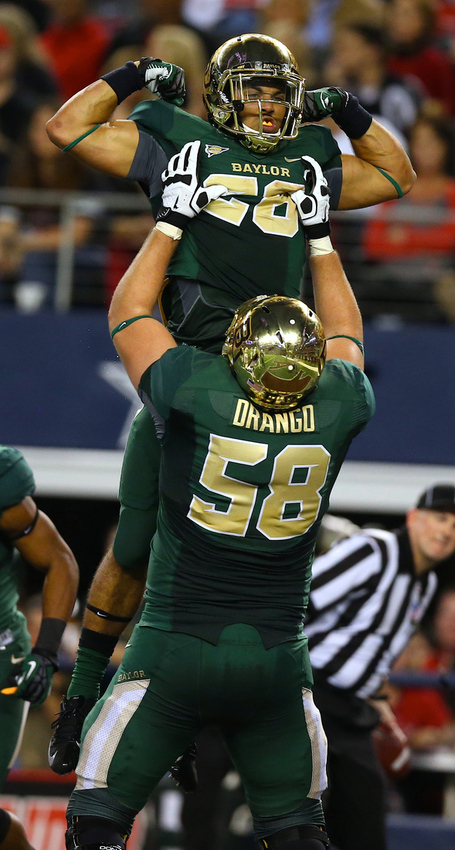 As it stands, the margin between Ohio State at No. 3 and Baylor at No. 4 is a barely perceptible .0013 points, considerably narrower than last week due to a) A narrower gap in the human polls, where OSU's edge was cut in half, and b) A major leap in the computer polls, which vaulted the Bears from fifth to third on the strength of their blowout win over Texas Tech. (Even if it hadn't been a blowout, the computers bumped Baylor despite having no idea what the score was.) Next week, while Ohio State is busy hosting another outmanned also-ran, Indiana, Baylor will be on the road against a top-ten opponent in both human polls, Oklahoma State. Whether or not beating the Cowboys is enough to overtake Ohio State outright in those polls, the Bears will pick up enough support there and among the computers to close the minuscule margin in the standings at large. From there, a season-ending win over Texas on Dec. 7 – the same day of the Big Ten championship game – ought to be enough to fend off a late OSU push against Michigan in Ann Arbor and (probably) Michigan State in Indianapolis. Just barely enough, but enough. As soon as the last nail is in the Hoosiers' coffin on Saturday, Ohio Stadium should hold some kind of collective vibe session to direct positive energy toward Stillwater, then just hope it settles over Oklahoma State's sideline.

• DARKHORSIN'. The exact scenarios are laid out a little further down, but Stanford's elimination as a contender leaves the door cracked just enough for four other aspiring gate-crushers – Oregon, Auburn, Missouri and Oklahoma State – to glimpse a potential route to the top. Three of those four actually have some control over clearing that route: Auburn gets Alabama in the Iron Bowl; Missouri, assuming it survives its next two games to win the SEC East, would get the Iron Bowl winner in the SEC championship game; and Oklahoma State gets Baylor in a game that will most likely decide the Big 12. Oregon, while suddenly back in the driver's seat in the Pac-12, blew its only chance against a heavy hitter at Stanford, which means the Ducks are almost certainly going to find themselves looking up at Auburn or Missouri if either set of Tigers claims the SEC championship; instead, they should be banking on a Mizzou loss in one of its last two games delivering the SEC East to South Carolina, and the Gamecocks stunning the West champ in Atlanta. (The same goes for Oklahoma State, which can earn a lot of good will against Baylor and Oklahoma but cannot hope to jump a one-loss SEC champion. And the Cowboys should be rooting against Oregon, too.) But all of that is predicated on unforeseen lapses by Florida State and/or Ohio State, which is more unlikely than anything else in this paragraph.

• DIGITAL LOVE. I don't want to stray too deeply into the at-large scene just yet, because filling out the rest of the big-money bowls is even more labyrinthine and confusing at this point than some of the more farfetched scenarios re: the title game. All we can say for (relatively) certain at this point is that a) There will be three at-large bids, and b) One of them is going to a team from the SEC, because Ess-Ee-See. Which team? Whichever one finishes the strongest among Auburn, Missouri, Texas A&M, South Carolina and LSU. (Or, if Alabama bites the dust in the Iron Bowl or the SEC title game, go ahead and write in the Crimson Tide.) The other two hinge on whether Clemson beats South Carolina, and Stanford beats Notre Dame, and how the Big 12 shakes out between Baylor and Oklahoma State, etc. Wisconsin, ranked 19th this week, has a lot of ground to make up in every poll; Arizona State and Michigan State may wind up playing in the Rose Bowl as Pac-12/Big Ten champs, but neither will get a serious look as an at-large following another loss. Ditto UCLA. 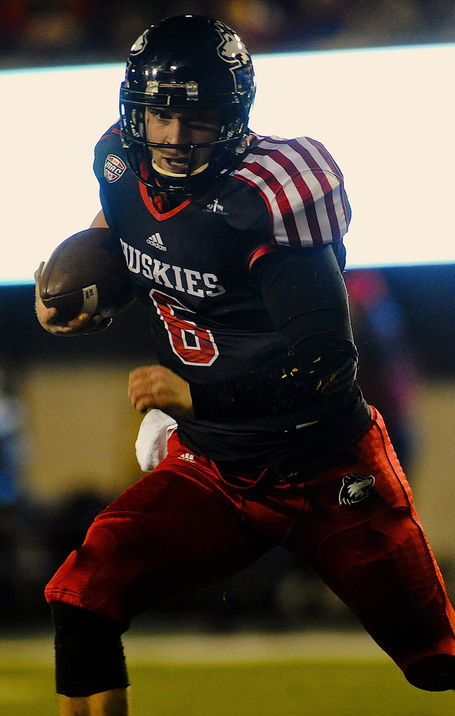 If you're doing the math in your head, note that the fourth at-large ticket is still being reserved for Fresno State if the Bulldogs finish off an undefeated season (or for Northern Illinois if they don't), and isn't really "at large" at all: Under BCS rules, Fresno (or NIU) is guaranteed a bid if it finishes in the top 12 in the final standings, or in the top 16 if it's ranked ahead of one of the automatically qualifying conference champions. This week, the Bulldogs are 15th (the Huskies are 16th), four spots ahead of BIG AMERICA frontrunner Central Florida after the Knights' harrowing escape against Temple; if UCF manages to spit the bit over the next three weeks, Louisville is no threat at No. 21. Outside of the top two, Fresno to the Fiesta Bowl is as inevitable as it gets.

REALPOLITIK TOP TEN. Each week we take the long view to reorganize the pecking order in a more user-friendly format, according to each team's odds of actually making the championship game in January. (As opposed to where they happen to rank in a given week, which may be only a fleeting snapshot.) Projections here take future schedules and multiple possible scenarios into account. Win-loss records reflect the record necessary to fulfill each scenario; remaining opponents in the top 15 of the current standings are in bold. 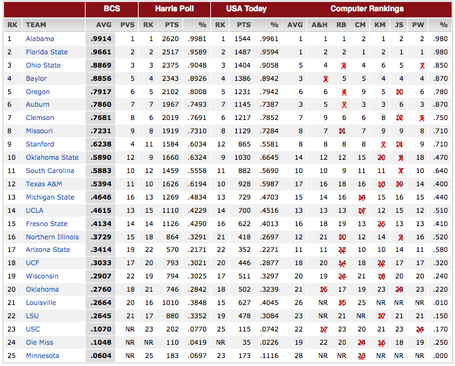 After ceding the outlier crown last week for the first time this season, Billingsley is back in his usual perch, albeit not by much: Among the top 25, RB's rankings were rejected for nine of them, just ahead of Kenneth Massey (8) and Jeff Sagarin (7). And again, it's Sagarin who turns in the single most bizarre ranking of the week, listing Northern Illinois at No. 3 (!). In Sagarin's defense, his ongoing love for the Huskies may well be his version of a barbed joke on the absurdity of the limitations the Series puts on the computers. In his "real" rankings, which take into account margin of victory, Northern Illinois ranks 46th, in accordance with its 137th-ranked strength of schedule; it's only in the PURE_ELO column, where BCS restrictions come into play, that the Huskies rocket into the national elite. The fact that we're stuck in a system that not only accepts the latter but mandates it is the best possible argument for a selection committee I can imagine.