Box Scorin', Week 12: Another week, another triumph for Baylor balance

Share All sharing options for: Box Scorin', Week 12: Another week, another triumph for Baylor balance

• Playing without its leading receiver and top two tailbacks, Baylor still finished with 340 yards rushing and 335 passing against Texas Tech, the fifth time this season the Bears have eclipsed 300 yards by ground and air in the same game. Through nine games, they remain on pace to shatter the FBS record for total offense at 684 yards per game, and have a realistic shot of becoming the first to average 300/300 over a full season: 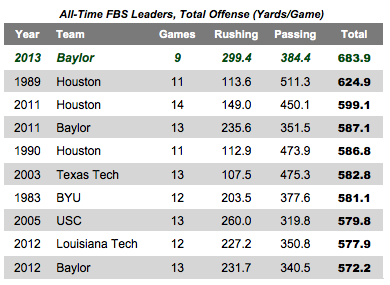 • Stanford QB Kevin Hogan finished with two interceptions and an 82.7 efficiency rating in the Cardinal's loss to USC, the worst rating of his career. Hogan also finished with a career low for yards per attempt (5.1) and did not throw a touchdown pass, the first time in 16 career starts he's accounted for more turnovers than scores.

On the other side, USC managed just 23 yards rushing on 0.9 per carry, its worst total on the ground in a winning effort since the turn of the century. 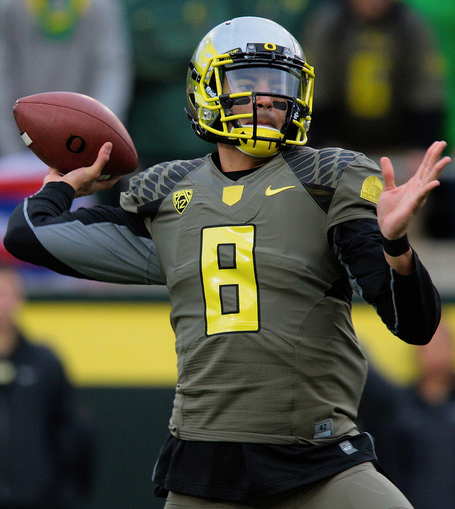 • Oregon State QB Sean Mannion was picked off four times at Arizona State, giving him twice as many interceptions in the Beavers' last two games (7) as he had in their first eight games combined. (Two of the INTs went to the same player, Robert Nelson, who took one back for a game-clinching touchdown in the fourth quarter.) Since 2011, Mannion has thrown multiple interceptions in eleven of 28 career starts, leaving him with more INTs than any active quarterback with fewer than 1,500 attempts.

• Virginia Tech lost to Maryland in overtime, 27–24, despite an interception-free performance from QB Logan Thomas, the first time in 38 career starts Tech has lost when Thomas does not throw an interception. Instead, the Hokies struggled on the ground (as usual), managing just 54 yards rushing on 38 attempts – the fifth time this season they've been held below two yards per carry.

• Florida State scored five touchdowns on its first 24 offensive snaps against Syracuse, building a 35–0 lead before the Orange had gained 35 total yards. Since falling behind early at Boston College on Sept. 28, FSU has outscored its last six opponents in the first half by a combined 191 to 21.

• Alabama committed four turnovers in an ugly, 20–7 win at Mississippi State – two fumbles, two interceptions – matching a 2009 win over South Carolina for most giveaways against an SEC opponent in the Nick Saban era. Before Saturday, Bama had committed seven turnovers in its first nine games combined.

• Nebraska committed five turnovers against Michigan State while forcing none, the fifth consecutive game the Cornhuskers have finished in the red in overall turnover margin. (They subsequently rank dead last in the Big Ten in giveaways for the second year in a row.) In 23 losses under Bo Pelini, the Huskers have turned in a negative margin in 21 of them, for a cumulative margin in those games of –48. 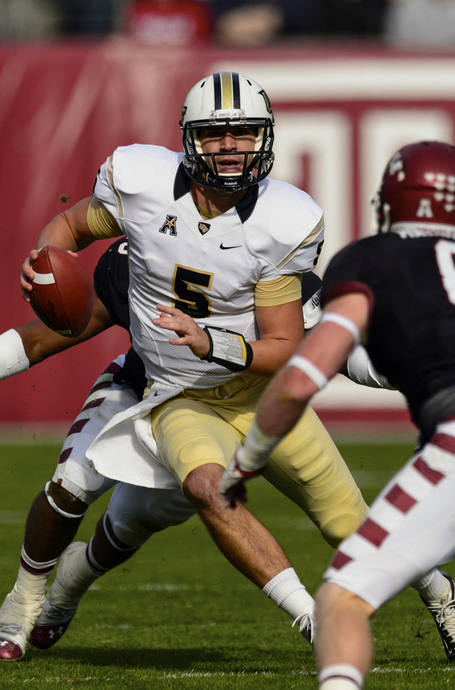 Central Florida and Temple combined for ten lead changes and 17 points in the final 2:06 of regulation in Philly, with both sides turning in season-highs for total offense in a wild, 39–36 win for UCF. In the Knights' case, 657 yards marked their most productive day on offense since at least 2000, courtesy of a career-high 404 yards and four touchdowns from QB Blake Bortles.

• Houston finished with 195 yards of total offense at Louisville, nearly 300 yards below its season average and its worst output in any game since a 2003 loss at Michigan. Although the Cougars did not turn the ball over, they managed just 13 first downs and a single play that gained more than 20 yards.

• Wisconsin racked up 554 yards rushing on 11.1 per carry against Indiana, the best single-game total on the ground by an FBS offense this season. Three different backs (James White, Melvin Gordon and Corey Clement) finished with 100 yards – White had 205, including 93 on the Badgers' first snap of the game – the third time this season all three have eclipsed the century mark in the same game.

• Ohio State racked up 441 yards rushing on 10.5 per carry against Illinois, the second time in three games the Buckeyes have eclipsed 400 yards on the ground in a blowout win. (Prior to a 408-yard effort against Penn State on Oct. 26, Ohio State had not cracked 400 yards on the ground in any game this century.) Although the Illini never really threatened, OSU kept the ball almost entirely in the hands of Braxton Miller and Carlos Hyde, who had 40 of the team's 42 carries for 430 yards and five touchdowns between them.

• Duke racked up 358 yards rushing on 6.9 per carry against Miami, eclipsing 300 yards on the ground for the first time since October 1994. That's more than 100 yards better than the Blue Devils' previous rushing high under David Cutcliffe, 234 yards against North Carolina in October 2012.

• Florida Atlantic set a school record with 333 yards rushing at Southern Miss, nearly producing three 100-yard rushers in a 41–7 blowout. (Jaquez Johnson and Jay Warren cracked the century mark; Damian Fortner came up just short with 98 yards.) For its part, USM committed three turnovers while forcing none, finishing in the red for the ninth time in ten games and extending its national lead in both giveaways (35) and negative turnover margin (–21). 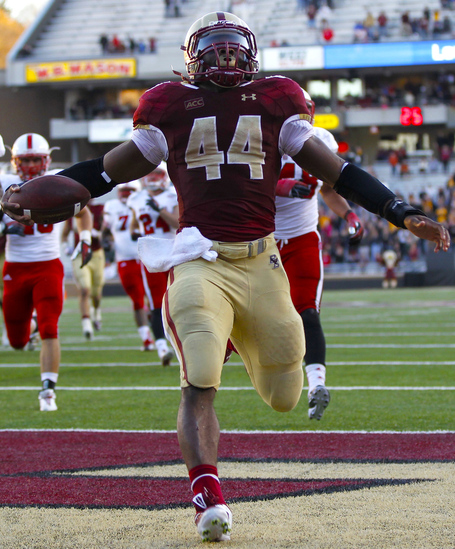 Boston College RB Andre Williams set a school record with 339 yards on 8.1 per carry against N.C. State, the best single-game total by any FBS back this season. With that, Williams extends his national lead for yards and carries per game, putting him on pace for the third-best rushing season in I-A/FBS history behind Barry Sanders (2,628 yards in 1988) and Kevin Smith (2,567 in 2007).

• One week after rushing for 312 yards and four touchdowns against Nevada, Colorado State RB Kapri Bibbs racked up 291 yards and six touchdowns against New Mexico, the fifth consecutive games Bibbs has accounted for three scores or more. (That adds up to 25 TDs for the season, six more than any other FBS rusher.) As a team, the Rams went over 300 yards rushing (347) and passing (302), finished 9-of-11 on third-down conversions and scored on eleven of twelve offensive possessions in a 66–42 track meet.

• Kansas RB James Sims ran for 211 yards on 9.6 per carry against West Virginia, the best day by a Jayhawk back since October 2001. With 31 points, Kansas eclipsed 30 in a regulation Big 12 game for the first time in two years under Charlie Weis, good for its first Big 12 win in three calendar years.

• Rice RB Charles Ross ran for 215 yards and five touchdowns against Louisiana Tech, the best day by an Owl back since September 2004. As a team, the Owls racked up 415 yards rushing in a 52–14 romp, their best number on the ground since scrapping the triple-option attack in 2005.

• After failing to score an offensive touchdown in the first half, Oklahoma ripped off five touchdowns in six possessions after halftime at Iowa State, on drives covering 75, 80, 84, 40 and 90 yards. The vast majority of the damage came on the ground, where the Sooners set a new high under Bob Stoops with 405 yards rushing. 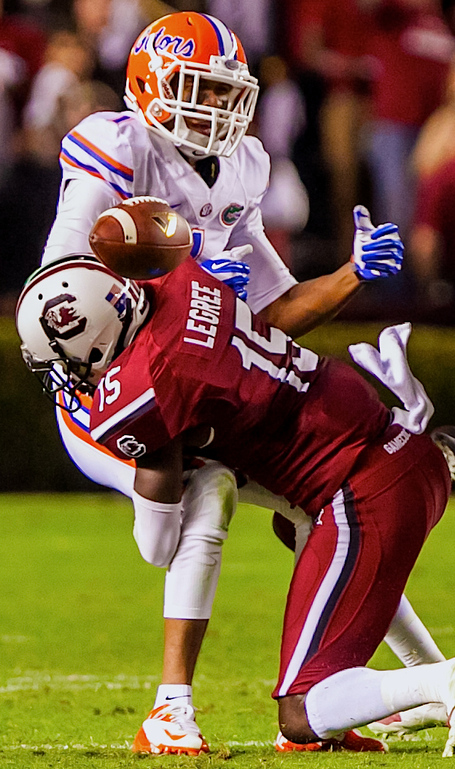 Florida drove for touchdowns on its first two offensive possessions at South Carolina, only the third time this season the Gators have scored on consecutive possessions. (They also did it in wins over Kentucky and Arkansas, where they put the ball in the end zone at the end of the first half and the beginning of the second.) The early lead marked the first time Florida led in a game since a 3–0 edge at LSU on Oct. 12, but couldn't hold as the Gators failed to score again in their fifth consecutive defeat.

• Michigan failed to score a touchdown in regulation for the second time in three weeks at Northwestern, but also held the Wildcats out of the end zone in a 27–19 win in triple overtime. Since setting the school record for total offense on Oct. 19 with 751 yards against Indiana, the Wolverines have a grand total of 708 yards in their last three games combined.

• Ole Miss set a school record with 751 yards of total offense against Troy, easily eclipsing 300 yards rushing (382) and passing (369) as a team despite failing to produce a 100-yard rusher or receiver. The rushing total was the most for Ole Miss against any defense since September 2010.

• UTEP and Florida International combined for eight completed passes in 31 attempts, the fewest completions by both offenses in any game this season. But the Miners thoroughly dominated on the ground, outrushing FIU 327 to 95 in a 33–10 blowout.

• Cincinnati QB Brendan Kay hit nine different receivers for 405 yards and four touchdowns against Rutgers, three of whom (Mekale McKay, Shaq Washington and Anthony McClung) went over 100 yards in a 52–17 blowout. As a team, the Bearcats completed nine passes covering at least 20 yards, and left as the fourth opposing offense this season to light up the Knights for at least 400 yards and five touchdowns through the air.