Todd Gurley and his effect on the Georgia Offense

This is the first piece from new Study Hall author Chad Peltier.

Share All sharing options for: Todd Gurley and his effect on the Georgia Offense

Georgia’s offense has been decimated by injuries this season, with the top four receivers, Todd Gurley, and Keith Marshall all out for extended periods of time. While the defense has regressed significantly with the departures of Jarvis Jones, Bacarri Rambo, Alec Ogletree, John Jenkins, and Shawn Williams (among others), the offense has done well despite the injuries and despite being asked to repeatedly bail out a young defense.

Despite the offense’s success relative to injuries -- the Dawgs are averaging 0.50 points per play compared to 0.57 last season -- they are a different team with Gurley on the field. The offense is productive because of Aaron Murray’s leadership and Mike Bobo’s play calling, but defenses key in to Gurley far differently than they do when backups J.J. Green or Brendan Douglas are on the field.

Below I highlight two examples of how Bobo anticipates this and constrains defenses on both standard downs (that cheat towards Gurley) and on passing downs (that attempt to blitz Murray).

Play action to Lynch off of fake Gurley Dive 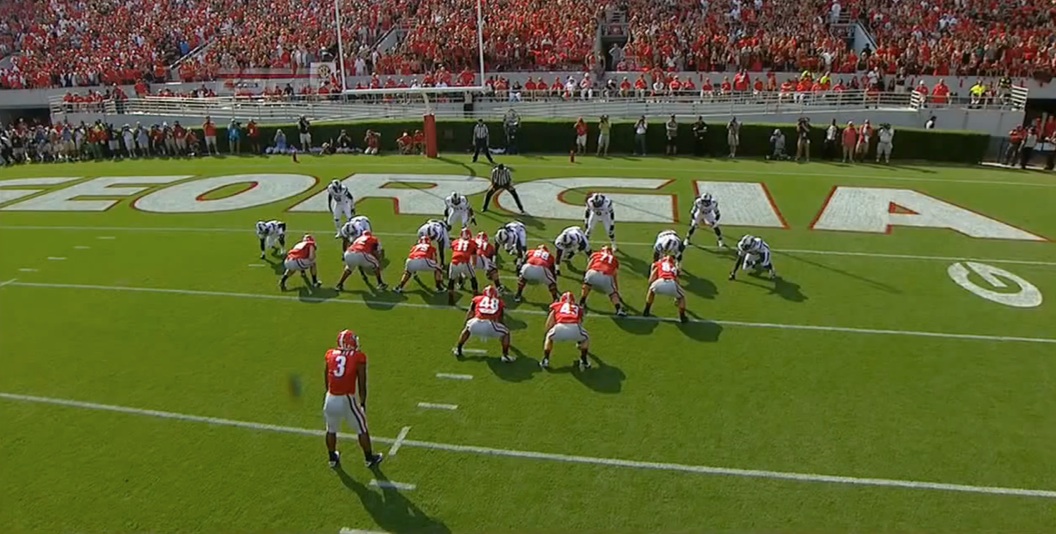 The play looks like a simple lead inside zone run, which is one of Georgia’s base run plays. Most of the Dawgs' play action is based off of this. The center, David Andrews, is quickly beaten, but Hicks fills the impromptu double team as Gurley looks like he will take the handoff between guard and tackle.

The goal on a normal lead inside zone is for the runner to hit the guard’s outside hip and then read either the defensive tackle or middle linebacker to find a vertical crease. Knowing this is one of UGA’s run plays, 10 South Carolina defenders attempt to swarm Gurley. Meanwhile, tight end Arthur Lynch briefly double teams Jadeveon Clowney before slipping behind the entire defense to be alone in the end zone. 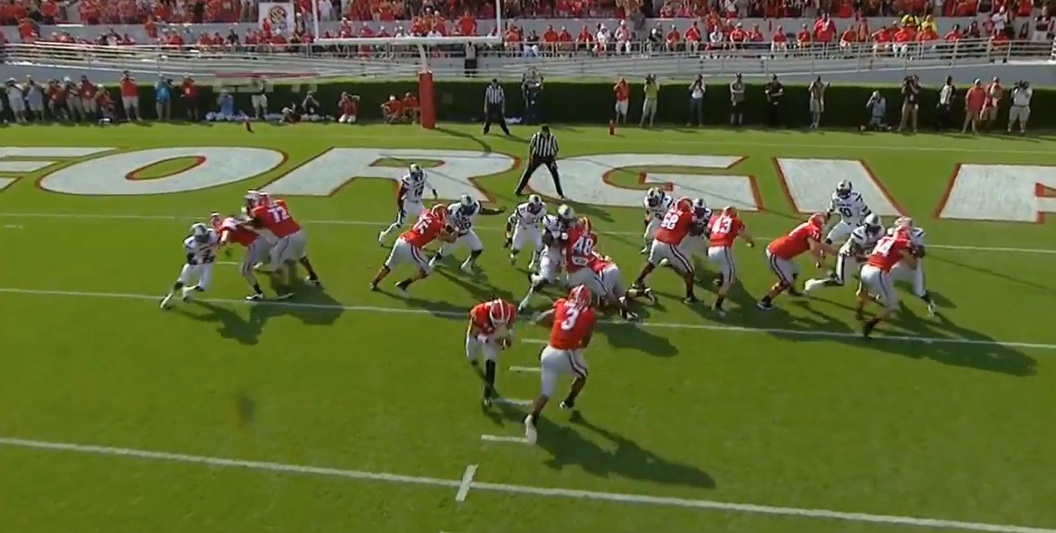 The scheme works because it plays directly to Georgia’s strengths as an offense (absent its top receiver Malcom Mitchell) and constrains a defense intent on stopping Gurley inside:

1. The call, which came on a second-and-goal from the 3, assumed that the Gamecocks would be looking ru-first with Gurley at full strength. Gurley’s mere presence in the lineup forces additional defenders into the box and to look towards the run first.

2. One of Aaron Murray’s many talents as a quarterback is in selling the fake on play action. Because of Murray’s acting skills, the safety and middle linebackers had already turned their bodies towards Gurley before they realized Lynch had escaped into the secondary.

3. The Georgia red zone offense, which is only converting approximately 64% percent of red zone opportunities into touchdowns, is nonetheless extremely balanced between run and pass. Georgia has 16 rushing to 13 passing touchdowns from the red zone.

As Murray initially goes into the shotgun on third-and-5, he points out that the Gators have seven in the box, with only two linebackers playing off the line and two deep safeties. Even before the Gator safety and a linebacker belied their blitz, he was clued in to the six-man blitz by the Gator defense.

The offense presented four vertical threats while the defense brought six defenders against just five blockers. This leaves only the safety, Cody Riggs, as the single high last line of defense.

Florida linebacker Antonio Morrison was sent on the blitz but realized too late that Georgia offensive coordinator Mike Bobo’s high/low vertical route combination of two square out, two fly routes (we assume - the outside receivers aren’t shown after the initial movement of the play), and halfback screen left an unoccupied zone in the middle of the defense.

The Gators sold out with the hope of getting to Murray before he could make a decision with the football. With the linebackers and one safety either blitzing or covering the four receivers, Gurley was hit right in the vacated middle of the field. It’s unclear whether Murray is initially looking downfield before moving to his second read in Gurley, but Murray made the correct read despite the blitz.

Again, this play demonstrates Bobo’s ability to call plays to the offense’s strengths and anticipating the defense’s movement. The play call was a blitz-beater by spreading receivers horizontally and then combining sprint-outs and vertical flies with the underneath running back screen. Bobo trusted Murray’s ability to both read the defense and then make a quick decision on where to put the football - a crucial skill for Aaron Murray at the next level.

After the pass is completed, it’s just Gurley and Riggs, which is almost always bad news for a safety.