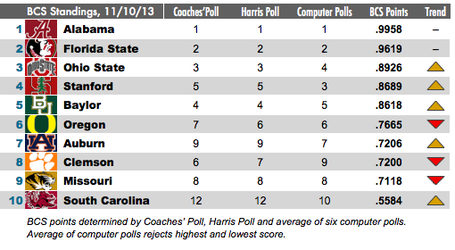 • AND THEN THERE WERE... TWO? Well, for the time being, anyway. It is November: Expect the unexpected, etc. Barring any cataclysmic twists over the next four weeks, though, Stanford's methodical demolition of Oregon officially ends the Ducks' pas de deux with Florida State at No. 2 and locks FSU and Alabama into the championship game on Jan. 6, end of debate. Close calls and "style points" are irrelevant, so don't even ask. If they win, the Noles and Tide are in. 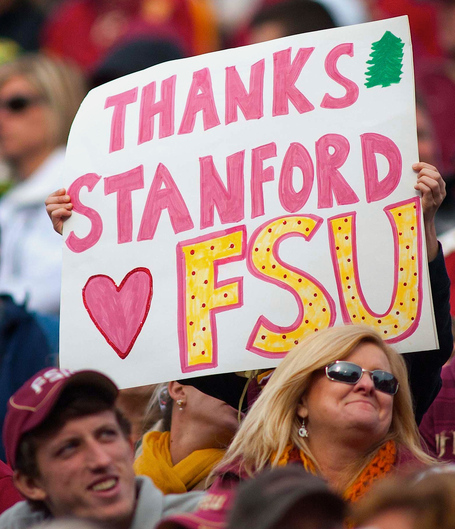 That's an enviable position to be in, obviously, but historically speaking it's also a dangerous one. By now, we've usually seen enough of the presumed frontrunners to confidently cast them as irresistible forces on an inevitable, unstoppable collision course ordained by the cosmos, but it rarely plays out that way. Since 2006, 13 teams ranked 1 or 2 in the BCS after Nov. 10 subsequently lost a game down the stretch, including No. 1 Kansas State and No. 2 Oregon last year on the same night. (Alabama's losses the last two years came just ahead of the Nov. 10 cutoff, one of the reasons the Tide had enough to time to climb back into the mix both years.) Of those 13, only LSU in 2007 wound up playing for the championship, and only then because 2007 was the most chaotic season of the BCS era, by far. Nothing in Bama or FSU's track record suggests either is vulnerable to a random lapse, especially with the finish line in sight. Both should be and will be favored to close out the rest of their games by double digits. Just remember that this time of year, you never see the bullet that takes you down, and neither does anyone else until it happens.

• THEN WHAT? So let's say for chaos' sake that Bama and/or Florida State takes an abrupt plunge into oblivion. Then it gets interesting. For predictive purposes, the pecking order behind the top two is a three-way tie that could conceivably break in all three directions.

As it stands, Ohio State has the inside track over Baylor and Stanford for two reasons, namely a) It's already ahead of the Bears and Cardinal in the relevant human polls, and b) Of the three, Ohio State is a recognizable, brand-name power voters already think of as a perennial contender, as opposed to the upstarts in Waco and Palo Alto. That doesn't matter in the computer polls, which collectively opted for Stanford at No. 3, one spot ahead of OSU. But it certainly does to a lot of human voters, who tend to skew older, less engaged nationally and more conservative in their hesitation to drop teams that haven't lost. In that context, comparisons to anyone behind the Buckeyes at the moment are futile. This is a program that has a BCS championship to its credit, has played for two more and was stuck on the sideline last winter at 12–0. If you were a voter, could you really bring yourself to demote an outfit that had won 25 straight at Ohio State? If it comes to that, many will find they cannot.

On the other hand, the resumé is the issue Buckeye fans feared it would be. The only team on the schedule that cracked any major poll this week is Wisconsin; with Michigan's ongoing collapse on offense, no one else earned so much as a token appearance in "Also Receiving Votes" purgatory. Meanwhile, the cushion between OSU at No. 3 and Stanford and Baylor – the Cardinal and Bears are effectively deadlocked at 4/5 – is not so wide it can't be crossed. Baylor and Stanford both just dispatched quality opponents that remain ahead of Wisconsin in the BCS standings, and both have tougher games in front of them. Here are the remaining schedules for all three, with opponents ranked by Sagarin: 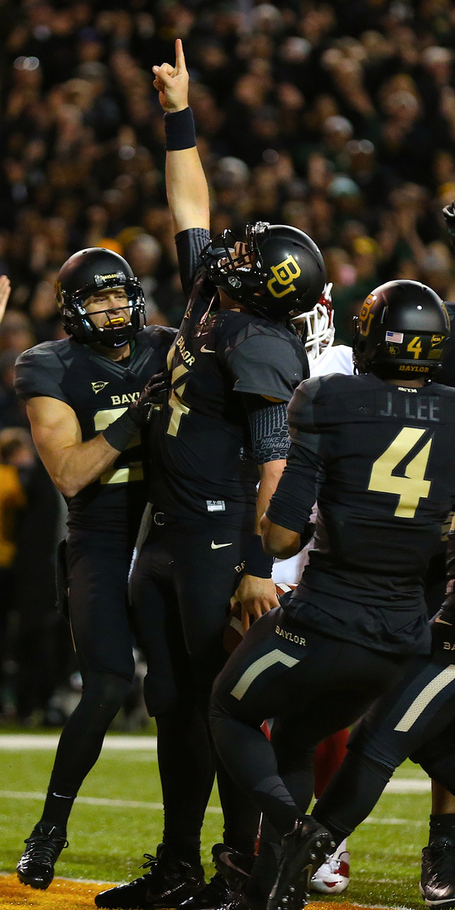 If the question was strictly limited to "quality wins," Stanford gets the nod on the strength of the Oregon mugging alone. In the long run, though, losses tend to mean more: No one-loss team has ever made the cut over an undefeated team from a "Big Six" conference. How can the Cardinal account for that increasingly inexplicable loss to Utah last month, and the accompanying sense that they didn't do everything to strengthen their case that they could have? Another complicating factor from this vantage point is the uncertainty about the strength of potential opponents in the various championship games; Ohio State badly needs Michigan State to come into Indy looking like a team voters will be impressed to see turned into a throw rug. Ditto Stanford against the winner of the Pac-12 South, the two frontrunners of which (Arizona State and UCLA) the Cardinal have already beaten. (To remain in this discussion, they'll have to beat USC this weekend, which will take the Trojans out of the running for a potential rematch.) Even Baylor, which doesn't have an official conference championship game, is counting on Texas salvaging enough cachet nationally to make for a quality victim in the finale, which by sheer coincidence could also serve as a de facto title game in the Big 12.

If I had to guess, I'd peg the final order in the human polls as Ohio State/Baylor/Stanford, and in the computer polls, Stanford/Baylor/Ohio State, although I'm not sure that helps when there are so many variables and vagaries involved. The only prediction I'll stand by now is that whatever finally comes out in December is going to leave everyone pissed off.

• DIGITAL LOVE. Man and machine are more or less in accord this week on the top ten, at least as far which teams belong there, if not the exact order. Beyond that, it's a free-for-all. The single biggest disagreement, predictably, is over Louisville, which has impressed the human polls (14th in the Coaches' poll, 13th in the Harris) far more than it has the computers, only one of which has the Cardinals in the top 25 at all. Ditto Oklahoma State (11th Coaches, 10th Harris), which ranks just 22nd among the computers. Flip that, and you've got Arizona State, a team that comes in 12th in the computer polls but 22nd among the humans. If only there was some way to make a logical computer brain capable of grasping and contextualizing the end of the Arizona State–Wisconsin game.

REALPOLITIK TOP TEN. Each week we take the long view to reorganize the pecking order in a more user-friendly format, according to each team's odds of actually making the championship game in January. (As opposed to where they happen to rank in a given week, which may be only a fleeting snapshot.) Projections here take future schedules and multiple possible scenarios into account. Win-loss records reflect the record necessary to fulfill each scenario; opponents in the top 15 of current standings are in bold. 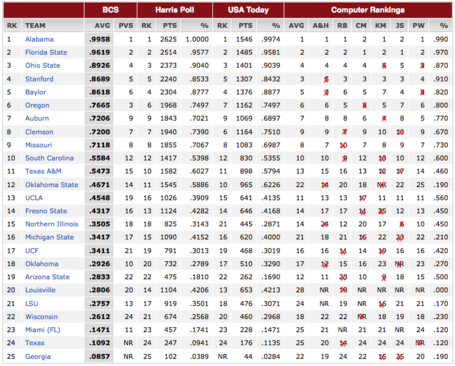 For the first time this season, Billingsley's latest effort is not the greatest outlier: The title goes instead to Kenneth Massey, who had nearly as many rejected rankings (10) in this week's top 25 as he had over the first three weeks combined (14). Billingsley did place a distant second with seven rejections, only about halfway to his season pace; that's only one more than Jeff Sagarin, whose PURE_ELO column – the rankings he submits to the BCS, even while endorsing an entirely different system that doesn't conform to BCS rules – still likes Northern Illinois at No. 6. Yes, in the nation. On the other end, Anderson & Hester saw their ranking for the Huskies, No. 24, dropped as the low-ball. Sometimes, outliers know exactly what they're doing.