• Its season on the line, Virginia Tech racked up 549 yards of total offense at Miami, its second-best total against an ACC opponent since joining the conference in 2004. (The best: A 605-yard romp over Wake Forest in 2010.) The vast majority of those yards came courtesy of quarterback Logan Thomas, who atoned for deflating, turnover-marred turns against Duke and Boston College by completing 25 of 31 passes for 366 yards, two touchdowns and zero interceptions, setting a season highs for pass efficiency (201.1) and completion percentage (80.6) in the process. For the season, Thomas has accounted for three-fourths of the Hokies' total offense, a higher share than any other player in the nation. 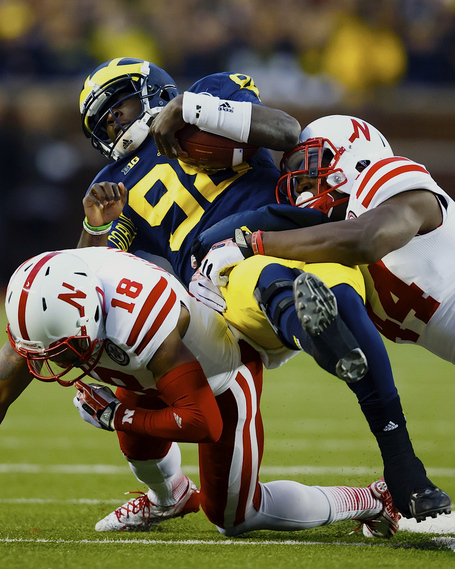 A week after rushing for –48 yards at Michigan State, Michigan netted –21 yards on the ground against Nebraska, making the Wolverines the first offense to finish with negative rushing yards in back-to-back games since San Jose State in November 2008. (Only two other teams have finished in the red even once this season: Pittsburgh, against Georgia Tech, and Washington, against Arizona State.) In those two games, Michigan backs have been dropped for a loss 26 times, with a long gain of nine yards.

• After punting on its first two possessions against LSU, Alabama scored on its last six, including consecutive touchdown drives covering 78, 80, 79, 71 and 78 yards in a methodical, 38–17 romp. After halftime, Bama ran 35 plays to LSU's 22, rolled up a two-to-one advantage in time of possession and outscored the Tigers 21–3.

• Kansas State's offense scored five touchdowns on its first five possessions at Texas Tech, as many as it's scored in any full game this season, en route to an efficient, 49–26 blowout. On those five drives, the Wildcats attempted just seven passes, resulting in six completions, a pass interference penalty and a 20-yard touchdown from Jake Waters to Tramaine Thompson that extended the lead to 35–10 at the half.

• Kansas failed to score a touchdown in any phase in a 42–6 loss at Oklahoma State, the first time the Cowboys have held a Big 12 opponent out of the end zone since the conference was formed in 1996.

• Florida State scored 59 points against Wake Forest despite gaining just 296 yards of total offense, easily the most points since the turn of the century by a team that finished with less than 300 yards. (The previous best: 51 points by LSU against UL-Monroe in 2010.) Of the Seminoles' eight touchdowns for the game, three came courtesy of the defense and special teams – one each via interception, fumble return and kick return – and three others came on drives that began inside the Wake 15-yard line.

• The punt return team for USC scored three touchdowns against Cal, all three – two on punt returns by Nelson Agholor, one on a blocked punt return by Josh Shaw – coming in the first half of a 62–28 rout. Offensively, freshman tailback Javorious "Buck" Allen, went for 192 yards and three touchdowns on just seven touches. 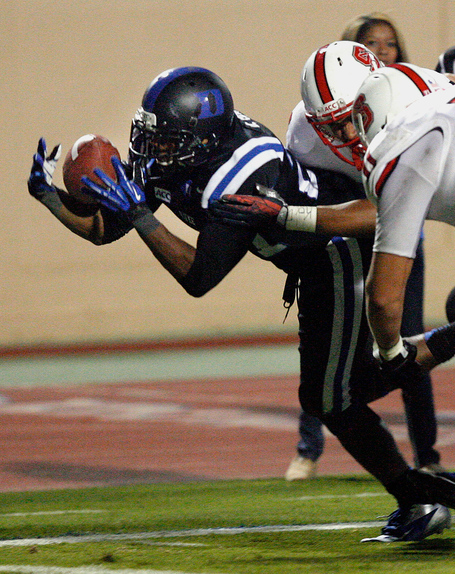 Duke trailed N.C. State late in the fourth quarter, 20–17, then proceeded to score three touchdowns in the span of 30 seconds on its way to a 38–20 win. The first score came with 3:31 to play, on a go-ahead, five-yard run by quarterback Brandon Connette; that was quickly followed by back-to-back interception returns by DeVon Edwards, on consecutive throws from Wolfpack QB Pete Thomas, clinching both the comeback and Duke's first winning season since 1994.

• Iowa churned out 318 yards on 52 carries at Purdue, its best number on the ground since November 2002, despite failing to generate a single run covering 20 yards. The Hawkeyes' top two backs, Jordan Canzeri and Damon Bullock, both topped eight yards per carry with longs of 18 and 15 yards, respectively.

• Offenses for Minnesota and Penn State combined for 34 points on eight possessions in the first half, and zero points in the second half of a 24–10 Gopher win. The Nittany Lions came close in the fourth quarter, driving inside the Minnesota 40 on three consecutive possessions, but came away empty after two turnovers on downs and a lost fumble on what turned out to be their final snap of the game – from there, Minnesota bled the final 6:40 from the clock to preserve the win.

• Offenses for Illinois and Indiana combined for 1,262 yards, 59 first downs and six touchdowns of 40 yards or longer in Bloomington, a 52–35 decision for the Hoosiers that marked Illinois' 19th consecutive Big Ten loss. In the final accounting, Indiana left as the only team this season to produce two players (Tevin Coleman and Stephen Houston) with 150 yards rushing in the same game, and the game is the first to feature both a 200-yard rusher (Coleman) and 200-yard receiver (Illinois' Steve Hull).

• Maryland entered opposing territory on offense seven times against Syracuse, but failed to score on six of them, managing a single field goal in a 20–3 loss. The other six trips resulted in (successively) a missed field goal, two interceptions, a fumble and two consecutive turnovers on downs to close the game.

• Boston College tailback Andre Williams set a school record with 295 yards rushing on 9.8 per carry at New Mexico State, including a go-ahead, 80-yard touchdown run in the fourth quarter of a 48–34 win. With that, Williams moves into the national lead on the season for carries, yards and yards per game. 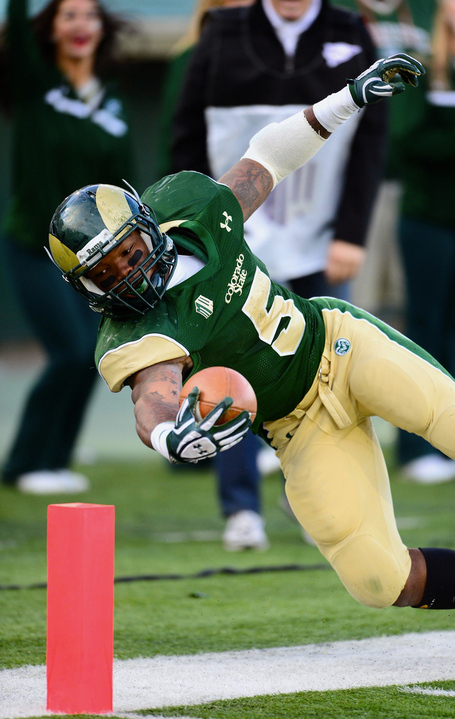 Colorado State tailback Kapri Bibbs set a school record with 312 yards rushing on 10.4 yards per carry against Nevada, including touchdown runs of 28, 54 and 85 yards in 38–17 win for the Rams. Bibbs, a former juco transfer, is one of only five players this season with a pair of 200-yard games to his credit, and the only one in that club with a 300-yard game.

• Auburn piled up 444 yards rushing on 8.4 per carry while attempting just seven passes at Tennessee, the second week in a row the Tigers have won comfortably with fewer than ten attempts through the air. (Since 2000, the only other SEC offense with fewer than seven passes in a conference game is Kentucky, which finished 4-of-6 for 15 yards in a win over Tennessee in November 2011.) Tiger QB Nick Marshall stole the show with 214 yards on just 14 carries; while five other Auburn backs since the turn of the century have cracked the 200-yard barrier in a game, they all needed at least 26 carries to get there.

• New Mexico rang up 451 yards rushing on 6.9 per carry against Air Force, completing a single pass in a 45–37 Lobo win. The majority of that number came from two players, Kasey Carrier and Cole Gautsche, who combined for 319 yards on a long gain of 21; most of the rest came from Jhurell Pressley, on a 61-yard touchdown run. The lone completion? A 28-yard touchdown from Gautsche to Jeric Magnant.

• Ole Miss QB Bo Wallace hit three passes covering at least 50 yards to three different receivers against Arkansas, two of them going for touchdowns in a 34–24 Rebel win. For the season, the only quarterbacks with more 50-yard strikes than Wallace (8) are Baylor's Bryce Petty (10) and SMU's Garrett Gilbert (9).

• Johnny Manziel turned in a sky-high 199.9 pass efficiency rating against Mississippi State despite throwing three interceptions, the fifth-best rating since 2000 among passers with three INTs in one game. Aside from the picks, Manziel was 30-of-36 for 446 yards (12.4 yards per attempt) and five touchdowns, matching his career high from September's shootout loss against Alabama. 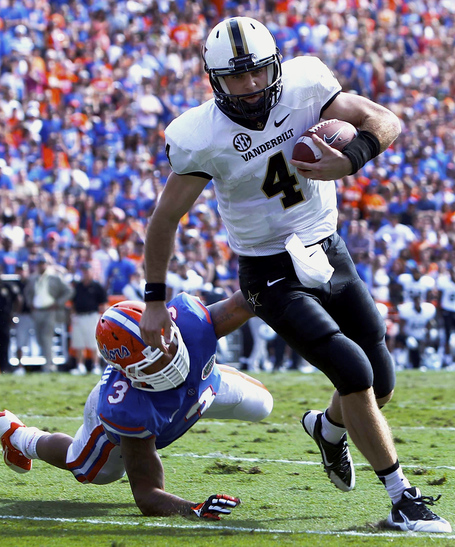 Vanderbilt finished with 183 yards of total offense at Florida, its worst output since September 2011, but also scored 34 points in its first win in Gainesville since World War II. Of Vandy's six scoring drives for the game, four came as the direct result of takeaways that set up the offense inside the Gator 25-yard line, including touchdown "drives" that covered (respectively) 10, 22 and 4 yards.

• Four of Missouri's six touchdown drives at Kentucky began in Wildcat territory, covering 39, 4, 44 and 32 yards, respectively, on a grand total of twelve plays. Oddly, only one of those possessions came as the result of a Wildcat turnover, the others following a couple productive kickoff/punt returns and a blocked punt.

• Offenses for TCU and Iowa State combined for 13 three-and-outs and 21 punts in Ames, generating significantly more yards on punts (768) than in total offense (651) in a 21–17 Horned Frog win. Before a game-winning, 58-yard drive to close the game, TCU's previous eight possessions had resulted in six punts and two interceptions.

• Offenses for East Carolina and Tulsa combined to complete 53 passes to 20 different receivers, only one of which covered more than 30 yards in a 58–24 Pirate win. Although both offenses spread the ball to ten different targets, though, ECU quarterback Shane Carden doubled up Tulsa's quarterbacks in terms of passing yards (384 to 175) and connected on five touchdown passes without an interception; his counterparts were picked three times and found the end zone just once.

• Southern Miss committed four turnovers in a 36–13 loss at Louisiana Tech, leaving USM with the most giveaways (32) and worst overall turnover margin (–18) in the nation. Over the course of their 21-game losing streak, the Eagles have finished with a positive margin just once, in a waterlogged, 21–17 loss to Louisville last September.