Box Scorin', Week Six: In which Baylor wrecks the curve

Share All sharing options for: Box Scorin', Week Six: In which Baylor wrecks the curve

• Baylor racked up 56 points on more than 600 yards of total offense in the first half alone against West Virginia, on the way to setting a Big 12 record for total offense and a school record for points in a 73–42 massacre. In three previous games against ranked teams, the Mountaineers allowed 74 points to Oklahoma, Maryland and Oklahoma State combined, on an average of 399 yards. Baylor finished with 864, and nine touchdown drives covering at least 70 yards apiece.

The win makes the Bears the first team since the 1930 LSU Tigers to score at least 70 points in three consecutive games, and it's taken considerable restraint to keep those games from being much worse:

If all four games had been stopped at the half, the Bears would still lead the Big 12 in points per game and rank second in total yards. As it is, they're No. 1 nationally in total offense, scoring offense, passing offense and pass efficiency, and No. 2 in rushing offense.

• Not to be outdone, Oregon scored touchdowns on eight of its first eleven possessions at Colorado, finishing with 755 yards of total offense in a 57–16 rout. With 349 yards rushing and 406 passing, the Ducks join Baylor as the only team this season to go over 300 yards by ground and air against the same FBS defense.

• Clemson quarterback Tajh Boyd completed seven passes that gained at least 25 yards against Syracuse, including touchdown bombs covering 60, 42, 40 and 91 yards, respectively, in a 49–14 win for the Tigers. (Boyd also had a fifth TD pass that traveled a mere 17 yards.) For the game, ten different Clemson receivers combined to average 20.3 yards per catch, more than eight yards better than their average coming in. 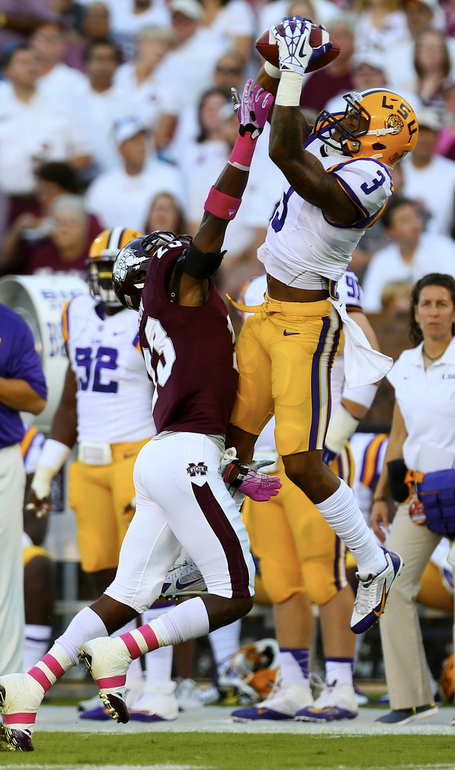 LSU receivers Jarvis Landry and Odell Beckham Jr combined for 275 yards on 17 catches against Mississippi State, the third game in a row they've accounted for at least three-fourths of the Tigers' total production through the air. Altogether, 563 yards of total offense marked the most for LSU against any SEC opponent in the Les Miles era, and 59 points was the most against an SEC opponent since 1997.

• Florida State led just 7–0 after one quarter, then proceeded to score eight touchdowns on eight consecutive possessions in a grisly, 63–0 romp over Maryland, ultimately outgaining the Terps by 480 yards. Maryland came into the game ranked 25th in the AP poll, meaning the final margin matched UCLA 66, Texas 3 in 1997 for the most lopsided loss ever endured by a ranked team.

• TCU managed just 210 yards of total offense at Oklahoma, its worst total in any game since 2006. For most of the night, even that looked out of reach: On their first seven possessions, the Horned Frogs went three-and-out on all seven, and finished with fewer first downs (10) than in any game since 2002.

• Notre Dame sacked Arizona State quarterback Taylor Kelly six times in a 37–34 win, matching its best total in the Brian Kelly era and exceeding its total over the first five games combined. The result: One week after ripping USC for 261 yards on 7.5 per carry, the Sun Devils managed just 65 yards on 2.6 per carry against the Irish, including 46 yards in negative sack yards.

• Nebraska tailback Ameer Abdullah racked up a career-high 240 yards on 21 touches against Illinois, eleven of them going for a first down or touchdown in a 39–19 blowout. As a team, 335 yards rushing marked the Cornhuskers' best effort on the ground against a Big Ten defense since joining the conference.

• Ball State outscored Virginia 31–10 over the final two quarters, taking advantage of four UVA turnovers to turn a 17–17 tie at the half into a 48–27 rout. The Cardinals turned the first three of those giveaways into 17 points, and used the fourth to kneel out the final 1:46 on the clock. 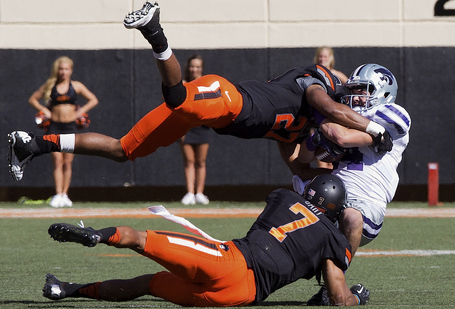 • Bizarrely, Kansas State's first possession at Oklahoma State took 11 plays and 8:12 off the clock, but never crossed midfield and ended in a punt. The Wildcats' second possession took one play, which went for a 67-yard touchdown.

Later, after an extended touchdown drive to open the second half, the Wildcats proceeded to turn the ball over five of its last seven possessions, leading directly to three OSU field goals in a 33–29 loss. The final giveaway, a third-down interception by Daytawion Lowe off Daniel Sams, clinched the final score with 18 seconds to play. 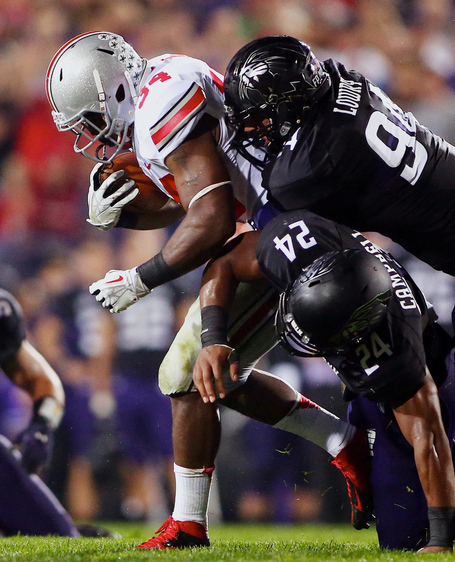 Of 74 offensive plays by Ohio State, 69 were attributed to Braxton Miller or Carlos Hyde, who combined to account for 97 percent of the team's total offense in a 40–30 win over Northwestern. Miller finished with 271 total yards on 43 plays (26 passes + 17 runs), an average night by his standards, while Hyde turned in a career-high 168 yards on 26 carries.

• In the same game, Northwestern quarterback Kain Colter was 12-of-12 passing in a losing effort, making him just the seventh player this century to finish with a 100-percent completion rate with at least ten attempts against a I-A/FBS defense. The last person to do it? Kain Colter, in a 10-for-10 performance against Minnesota last October.

• Kansas scored on its first two possessions against Texas Tech, and didn't score again until garbage time of a 54–16 rout. After taking a 10–0 lead, the Jayhawks' next dozen chances with the ball yielded six punts, three fumbles, two turnovers on downs and an interception.

• Arkansas attempted 43 passes to 29 runs against Florida, the second week in a row the Razorbacks have passed more than they've run. In his last three years at Wisconsin, Bret Bielema's teams only attempted more passes than runs twice in 39 games.

• In a match-up of mentor (Mike Leach) vs. protegé (Sonny Dykes), quarterbacks for California and Washington State combined to complete 76 of 130 passes for 1,042 yards and five touchdowns in a 44–22 win for the Cougars. Sixteen different receivers had multiple catches, led by Cal's Chris Harper, who had 14 for 216 yards, but couldn't prevent the Bears from finishing –4 in turnover margin.

• Miami racked up 551 yards on just 53 plays against Georgia Tech, thereby topping 10 yards per play over the course of a full game for the first time this century. Of those 53 plays, 22 went for a first down, and ten went for at least 20 yards.

• Florida Atlantic finished with 579 yards of total offense in a 37–23 win over UAB, its best total since 2009 and a full 250 yards above its season average coming into the game. All five of the Owls' touchdown drives covered at least 65 yards. 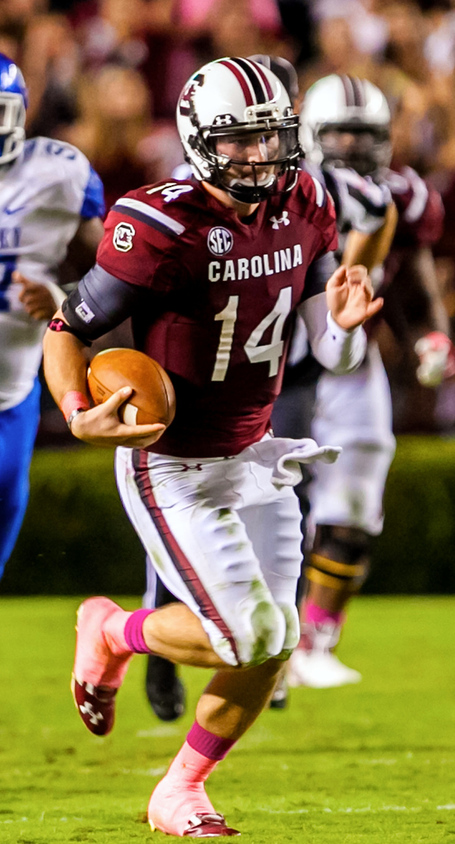 South Carolina's offense scored on six of its first seven possessions against Kentucky, then ran out the clock on the eighth in the most slow-paced 35–28 win you'll ever see. After falling behind 21–0 early in the second quarter, the Wildcats scored touchdowns on four of their last six chances with the ball, briefly making it a game before the Gamecocks were able to choke out the final four minutes.

• Missouri scored on its first eight possessions against Vanderbilt, building a 30–7 lead at the half and hanging on to win easily, 51–28. With 245 yards rushing and 278 passing, the Tigers went over 200/250 in those categories for the fourth time in five games, and set new team highs for total yards and points against an SEC defense.

• Aaron Murray's surprise, 57-yard run against Tennessee was not only his longest run as a college quarterback: It covered yards than he'd gained on the ground in any of his previous 45 starts. Coming into the game, including sacks, Murray had a grand total of 230 yards rushing in his entire career.

• South Alabama and Troy combined for three touchdowns in the final three minutes, the last one coming on a desperate, game-winning heave from Troy's Corey Robinson to Eric Thomas with seven seconds to play. For the game, USA outgained the Trojans by 196 yards, didn't commit a turnover, didn't allow a special teams score, and still lost, 34–33.

• New Mexico piled up 541 yards rushing on 9.7 per carry against New Mexico State, eclipsing 600 total yards for the first time since 2003 in a 66–17 massacre. Five different Lobos combined for seven rushing touchdowns, only one of which (the last one) came from longer than 16 yards out.

• Southern Miss committed four turnovers and failed to score on six separate trips into Florida International territory, including a blocked field goal on the final play of a 24–23 loss. With that, the Golden Eagles – favored by more than two touchdowns against FIU, which tells you all you need to know against FIU – have lost 17 straight, the longest streak in the nation, and won't face a worse team again. Maybe ever.