Largely built around horizontal stretches, speedy players, and lightning tempo, the OU offense is finding the missing power ingredients by deploying a Yeti at QB.

Share All sharing options for: Spread to Power: Blake Bell opens up possibilities for OU offense

In 2012, Oklahoma went into an early-season game against No. 15 Kansas State with a home record of 78-3 in the Bob Stoops era. To that point, they had played ranked opponents at home 13 times and never lost. The three home losses had come in the form of a a rivalry game against a Les Miles Oklahoma State team, an overlooked Gary Patterson TCU squad, and Tommy Tubervile's shocking triumph with Texas Tech in 2011.

That record of sustained dominance within Norman came to a halt when Collin Klein led the Wildcats to a 24-19 victory. The Sooners' utter dominion over their home field took then another hit when the surging Fighting Irish of Notre Dame came in and defeated the Sooners, 30-13, in another prime-time football game.

In these shocking defeats Oklahoma was out-rushed by KSU, 223-92, and by Notre Dame, 215-15. Dominated in the trenches on both sides of the ball, Oklahoma's finesse/up-tempo attack was unable to yield results.

Then last weekend, the Sooners went into South Bend and administered a 35-21 beatdown while only being out-rushed by the Irish 220-212. You can't say a team was beaten up in the trenches if they managed 200 rushing yards. Meanwhile, Notre Dame's ability to run the ball on the Sooners was foiled by a curious game plan and three costly interceptions.

Perhaps due to their failures to run the ball effectively in 2012, combined with the shellacking delivered to Stoops' proud program by Johnny Football, Stoops adjusted his offensive strategy ever so slightly to beat up the physical Fighting Irish. Oklahoma went into the 2013 season with three mobile QB's and chose the fastest (and healthiest) as the starter coming into the year. When Trevor Knight proved ineffective in the passing game that still defines much of OU's attack, Stoops released the monster:

Standing at 6'6 and weighing in at 252 pounds, Blake Bell is often the most imposing player on the football field. He is bigger than most defenders (save for a few defensive tackles) and towering over even much of his own offensive line. OU's trained Yeti has only decent acceleration and top-end speed, and probably runs the 40 in about 4.8 seconds. However, he does have quick feet, an understanding of how to find running lanes, and the ability to cut upfield and fall forward, often over the wrecked body of a defender.

It's difficult to determine exactly what Bell's ceiling is as a passer. Both in his runs and passes he's a cautious one, prone to taking several hitch steps before firing deep downfield and generally opting away from risky passes even in the Sooner screen game. This caution results in a lack of accuracy when throwing downfield when Bell misses the timing or the route. However, his massive arms can throw the ball with touch to any part of the field with very little apparent effort.

In sharp contrast with Notre Dame's own empty formation, with its cast of big and tall receivers and mostly vertical routes, Oklahoma deployed Bell in a much more diverse empty set I like to call the "Wild Yeti" formation. 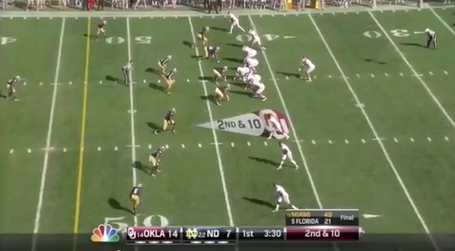 From this formation, the Sooners were able to attack every part of the field. In the version of the empty backfield that they utilized against the Irish, the Sooners would spread four receivers wide, along with a running back aligned as the second receiver to the boundary.

While they generally prefer a Cover-2 approach that forces long, strenuous drives against a massive front, against this formation Notre Dame was forced into a Cover-3 scheme that keeps its inside linebackers in the box and surrenders large cushions to the outside receivers.

Given OU's playbook, the Irish had to first be aware of the horizontal stresses presented by OU's complement of WR screens and the Zone Stretch running play. These plays are low-risk, high-reward staples in the Oklahoma attack, and they become exceptionally dangerous when executed with explosive players at lightning tempo.

They can also run the "Wildcat" inspired Power-Read:

Bell's ability to run up the middle held the Irish linebackers in the box, but Sterling Shepard's atrocious blocking on the edge ruined the opportunities for Roy Finch to cut upfield.

They also used various iterations of their WR screen game:

With this "tunnel screen," OU motions the RB out to the boundary from the backfield. Bell reads the response in the Irish coverage to this move before deciding against the quick flare and instead throwing a tunnel screen to the explosive Shepard. In this rare instance, the OU linemen don't get out to demolish would-be blockers as they inevitably will on October 12 against Texas. Blocking Notre Dame defenders is a chore unlike blocking B12 players, and the Irishsingle-high safety coverages allowed them to match up across the front.

The risk with that defensive approach comes from defending the vertical passing game without a second deep safety.

In the first play, Bell has a 1-on-1 matchup down the sideline to 6'3 Lacoltan Bester. You see that Bell's timing on his throw is off, but that at least helps the Sooners draw a pass interference flag when the defensive back is unaware of the eons that he had to look for the ball and thus stuck his mitts in the receiver's face.

In the second play, OU motions the RB back into the backfield for extra protection and then runs vertical routes to the field that draw the free safety. This frees up Bester, first for a post route that should have been thrown for a touchdown, but then for a bomb to the corner of the end zone for a score. Note Bell's bad timing, good recovery, and how tiny the ball appears when gripped in his massive hands.

It was his upgraded execution of the screens and vertical pass game that resulted in Bell eventually wresting the job from Trevor Knight's hands, but the real key to these schemes is still the way OU can use him in the run game.

En route to a 212-yard rushing game against one of the most imposing defensive fronts in college football, Oklahoma ran numerous run game concepts against the Irish, many of them from their empty formation. The most dangerous of them, of course, is this:

QB Draw. The tackles step wide to create extra large gaps before engaging the defensive ends, the center and left guard double Louis Nix III while the right guard pulls around to take out a LB for Bell as he rumbles forward for nine yards. Notre Dame kept both linebackers in the box with their single-high safety coverage and were still run over by this concept.

Additionally, Oklahoma made use of another spread-out formation to create similar problems for the Irish defense.

They spread out four wide receivers but pair Bell in the backfield with the team's fullbacktightendrunningback Sasquatch playmaker Trey Millard. At 6'2, 253 pounds he's a wrecking ball in the Sooner offense as a lead blocker but can also catch and run out of the backfield.

Millard is the key to the Oklahoma run game and, as the announcers noted, the ball usually follows him. Above, Oklahoma runs Inside Zone with Bell as the featured runner looking to the cutback lane behind Millard's block. Not sensing their peril, Notre Dame got caught in a 2-high safety coverage and gave up a cool 11 yards.

Oklahoma ran their fundamental outside zone "stretch" play from this formation as well, again using Bell.

Bell doesn't explode through the hole in the same way that a Sooner tailback might, but he does leap over some blocking debris and show awareness of how to run the concept and move the chains.

With Bell and Millard, mobile linemen whom exhibit mastery zone blocking, and the explosive OU receivers and tailbacks, Stoops can spread the field and hurry up the tempo without losing the power run element that elite clubs must have.

Besides his growing mastery of pass game reads to complement his run reads, Bell's Abominable Snowman physique is the greatest key to OU's success this season. The brilliance of all spread-out offenses exists in the way they can stress defensive concepts, but they come at a great cost. A QB throwing the ball out of empty sets can become a sitting duck against teams that respond to such tactics by overwhelming the protection with blitzers. Bell partially mitigates this through his skills as a scrambler.

Dozens of starting quarterbacks can create similar problems if you blitz them and allow running lanes or don't respect their threat as a runner. The real difference between Bell and everyone else is this: Between the shots taken delivering vertical passes and the pounding accumulated by being a featured runner in the offense, it can be very difficult for a QB to stay healthy over the course of a season when asked to make everything happen in a spread offense.

OU's rival, Texas, has struggled already this year to keep David Ash healthy while simultaneously being utterly dependent on his mastery of all the different skills that are needed to fully harness their spread offense and its weapons. Colt McCoy was injured late in the season trying to carry the run game for two of Mack's better teams, the 2006 and 2009 Longhorns. Collin Klein barely survived the toll of being Kansas State's featured runner in 2011 and 2012 while also getting the ball to their dangerous receiving corps. Tim Tebow himself had to fight through numerous injuries to handle the Bell-like role of providing power running to spread concepts.

Blake Bell is about 25-30 pounds heavier than Tebow or Klein. In sacrificing some of their speed and explosiveness in the open field, which OU hardly needs given their other weapons, he offers OU the chance to put a great toll on the QB position and have a reasonable chance of seeing him finish the year. If he accumulates bumps and bruises along the way, they aren't terribly likely to keep him from being able to lower his head and truck smaller players, or find OU receivers.

There are two options for teams that want to spread out defenses.

1) Have an explosive athlete at QB like Marcus Mariota, Devin Gardner, or Braxton Miller who can run and throw and hope they stay healthy because they provide your main firepower.

2) Utilize a very sturdy and skilled player who offers enough mobility and passing acumen to distribute the ball to other explosive players.

Teams following Plan 1 are completely sunk if that QB suffers a major injury. You can never get your back-up enough reps to master the offense in the same way the predecessor had, assuming your back-up has even remotely comparable athletic ability.

Plan 1 isn't a terrible one, indeed it's the right call if you have a very special player. But if your firepower is dispersed across the OL and different skill positions, it's nice to have a rock calling the signals that isn't likely to go down.

In the future, Trevor Knight may develop into a Plan 1 player, but in the meantime the Sooners have a chance to fit their athletic pieces together with a 253-pound hammer. He is the Yeti, hear him roar.