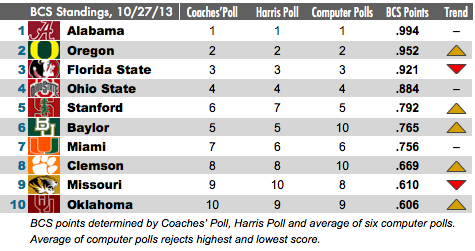 • AS EXPECTED. Florida State's scorched-earth romp over N.C. State wasn't enough to keep Oregon from leaping FSU into the No. 2 position, thereby fulfilling last week's assumption that the Ducks are in the driver's seat due to their stronger schedule down the stretch. Although nothing changed in the relevant human polls, the computers rewarded Oregon's win over UCLA – No. 12 in last week's standings – by collectively bumping the Ducks from fourth to second; Florida State, No. 1 in last week's computer average, fell to third. (Remember, under BCS rules the computers are prohibited from accounting for margin of victory in their algorithms, or at least they're supposed to be.) There may still be some back and forth here over the next few weeks, especially given that Florida State gets undefeated Miami at home next week (early lines have FSU as a 22-point favorite) while Oregon has the weekend off ahead of its blockbuster trip to Stanford. Assuming both teams keep winning, though, in the long run Oregon has clearly staked out the inside track with human voters and has the schedule to hang on to its razor-thin edge with the computers. Even if they switch places again, the Ducks are still on track to pull away at the finish. 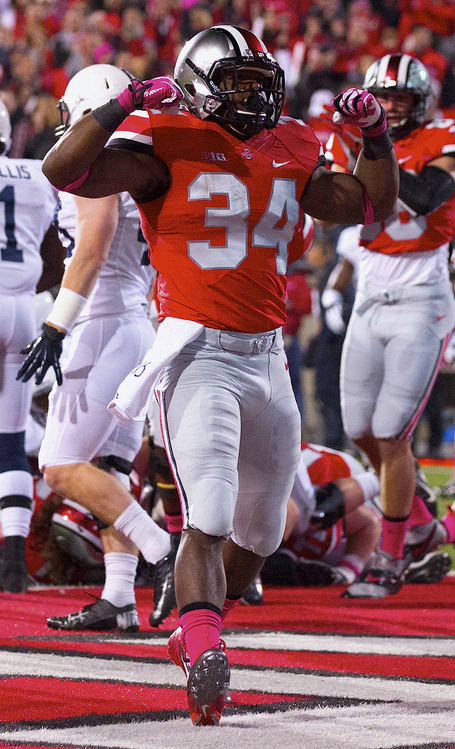 In one respect, the status quo for Ohio State is exactly the same: Unless/until one of the "Big Three" in front of them takes a hit in the loss column, the Buckeyes' middling strength of schedule leaves them entrenched at No. 4 across the board. Still, their historic annihilation of Penn State almost certainly advanced their cause with human voters, who will be far less likely now than they were on Saturday morning to consider bumping OSU in favor of an undefeated Baylor or a one-loss Alabama, Oregon or Stanford. Nothing has changed re: the reality of the Big Ten schedule, but the perception of Ohio State as a (relatively) lethargic overlord content just to keep scraping by certainly has.

Speaking of lethargic: Where does Miami fit in that equation? It's hard to imagine a 7–0 team with the Hurricanes' schedule to date looking less inspired than they have in back-to-back, down-to-the-wire escapes against North Carolina and Wake Forest, two of the most mediocre outfits in a throughly mediocre conference, but an upset in Tallahassee has the potential to turn all assumptions about the pecking order in the ACC and the BCS at large on their ear. Neither Ohio State nor Baylor has a chance to claim a trophy of that magnitude, and the Canes can double down with wins over Virginia Tech, Duke (the Blue Devils are 6–2!) and either Clemson or Florida State again in the ACC title game. Is that enough to vault them to No. 2 if Alabama or Oregon comes tumbling down? At this point, that scenario may be too farfetched to consider.

• DIGITAL LOVE. The other unfolding drama comes further down the list, where potential "BCS Busters" Fresno State and Northern Illinois have been promoted to No. 16 and No. 17, respectively, and look very, very likely to close out undefeated seasons. Recall from last year's controversy over NIU's selection to the Orange Bowl the process by which a team from a non-AQ conference is allowed to crash the party:

3. The champion of Conference USA, the Mid-American Conference, the Mountain West Conference, or the Sun Belt Conference (hereinafter "non-AQ group") will earn an automatic berth in a BCS bowl game if either:

A. Such team is ranked in the top 12 of the final BCS Standings, or 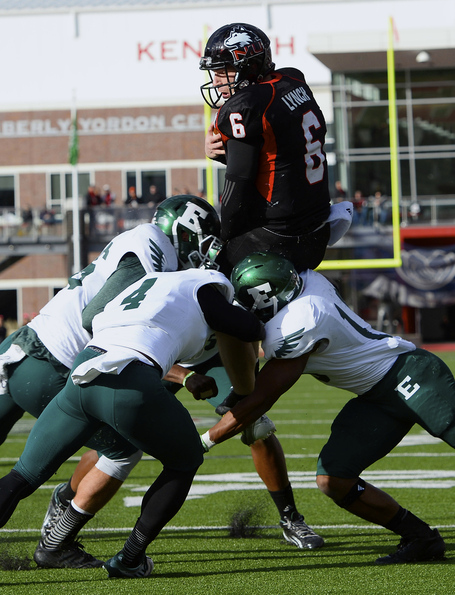 I emphasize the AND in that last graf because it makes all the difference in the world: Last year, NIU was only 15th in the final standings, lower than any other team that had ever qualified for a BCS game, but made the cut automatically because the champions of the Big East (Louisville) and Big Ten (Wisconsin) were ranked significantly lower. As it stands, BIG AMERICA frontrunners Louisville (19th) and Central Florida (23rd) are both ranked behind Fresno and NIU right now, as well, meaning if one or both runs the table a big-money bid is all but assured, no questions asked. (And after Fresno's narrow, overtime escape at San Diego State, there are plenty of questions.)

One of the reasons the Bulldogs and Huskies are in such solid position, surprisingly, is their good standing in the computer polls, where both rank in the top 15 despite the computers' alleged emphasis on strength of schedule. (NIU's best win is over Iowa, by three points; the crown jewel in Fresno's resumé is either a one-point win over Rutgers, in overtime, or a one-point win over Boise State.) In fact, even the machines don't really know what to do with them. In Jeff Sagarin's rankings, for example, his "real" rankings – which include margin of victory – list both NIU and Fresno as mediocrities at No. 51 and No. 52, respectively, nowhere near the threshold for a BCS game; in the version Sagarin submits to the BCS, though, which excludes margin of victory, the same teams come in at No. 3 and No. 14. The absurd result for NIU was rejected from the final computer average as an outlier (see below), but the Huskies still have more than enough support in the other polls to book a return date if/when Fresno finally runs out of gas. Either way, go ahead and brace yourself for a likely bloodbath when one or the other makes the cut.

REALPOLITIK TOP TEN. Each week we take the long view to reorganize the pecking order in a more user-friendly format, according to each team's odds of actually making the championship game in January. (As opposed to where they happen to rank in a given week, which may be only a fleeting snapshot.) Projections here take future schedules and multiple possible scenarios into account. Win-loss records reflect the record necessary to fulfill each scenario; games in bold are against teams currently ranked in the BCS top fifteen.

10. Oregon (12–1)
Credential: One-loss Pac-12 Champion
Remaining Schedule: See above.
Path to Championship: Rebound from loss to win Pac-12 championship + Loss by Stanford (IF Stanford wins head-to-head) + Losses by Alabama and/or Winner of FSU–Miami and/or Ohio State and/or Winner of Baylor–Oklahoma and/or Auburn/Missouri 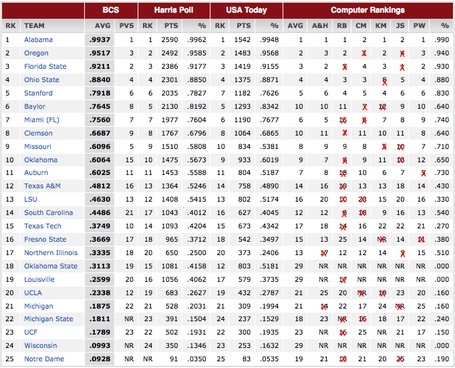 RB comes in just over the Mendoza line this week with his rankings for 13 of the top 25 actually making the final cut. And he's far more in line with the other polls at the top: After having his ranking rejected for 12 of last week's top 15, this week's standings only rejected his number for three of the top nine. Sagarin, who seems to have the most difficult time adjusting his preferred formula to BCS mandates, comes in a distant second again with rankings rejected for seven of the top 25 for the second week in a row.

Next week, everything may look completely different. But probably not for very long.