• Ohio State racked up 686 yards of total offense against Penn State, a new high for the Buckeyes against a Big Ten defense and a new low for the Nittany Lions in the 127-year history of the program. The final score, 63–14, made it the most lopsided defeat Penn State has endured since Nov. 25, 1899, in a 64–5 loss to the Duquesne Athletic Club, which was also the last time Penn State allowed 60 points. In the intervening 114 years, only two other opponents scored 50 points against Penn State: West Virginia in October 1988, and Navy in October 1944. 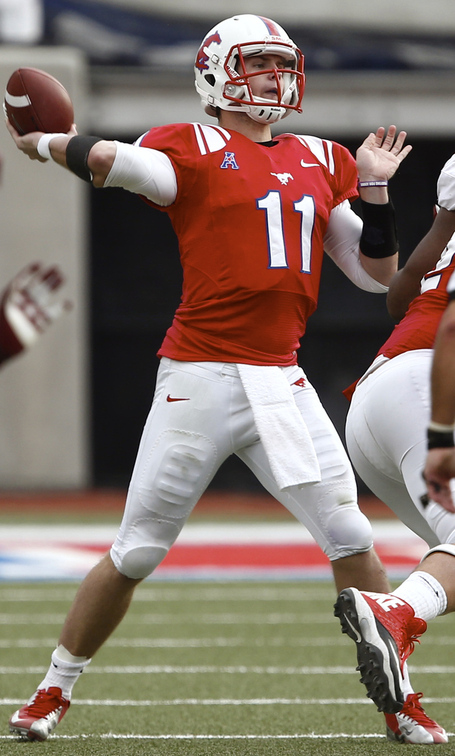 SMU quarterback Garrett Gilbert accounted for 635 yards of total offense and six touchdowns in a 59–49 win over Temple, making him the first FBS player this season – and only the sixth in the past decade – to crack the 600-yard barrier in a single game. (His total on Saturday comes in at No. 7 on the all-time list.) Two Mustangs, Keenan Holman and Der'rikk Thompson, finished with more than 150 yards receiving, as did Temple's Robbie Anderson, who left with more all-purpose yards (311) as a receiver and return man than he'd accounted for in his first two-and-a-half years on campus.

• Michigan State QB Connor Cook was 15-of-16 for 208 yards and three touchdowns against Illinois, setting a school record for pass efficiency (264.8) in a 42–3 rout. After a slow start, the Spartan offense as a whole converted 14 of 16 third-down attempts – including a kneel-down to end the game – the best single-game rate by any team this season, and scored touchdowns on six consecutive possessions before killing the clock.

• Stanford recorded eight sacks against Oregon State, dropping Sean Mannion as many times as the Beavers' first seven opponents combined in a 20–12 win for the Cardinal. Coming into the game, Oregon State was averaging 516 yards of total offense on 6.7 yards per play; against Stanford, it finished with 288 on 3.6 per play and failed to score on four separate trips into Cardinal territory.

• UCLA quarterback Brett Hundley finished with just 136 yards of total offense in a 42–14 loss at Oregon, eclipsing last week's total at Stanford (219 yards) as the worst of his career. In his previous 19 starts, Hundley had accounted for at least 300 yards in ten of them, and never been held to fewer than 250.

• Minnesota pounded out 271 yards rushing against Nebraska in a 34–23 upset, the Gophers' best number on the ground against a Big Ten defense since November 2005. Aside from three-and-outs to open each half, eight of the Gophers' other nine offensive possessions crossed midfield into Cornhusker territory.

• Wyoming and San Jose State combined for 1,241 yards of total offense and five plays covering at least 50 yards in a wild, 51–44 game decided by an SJSU touchdown with eight seconds to play. For the Spartans, the star (as usual) was QB David Fales, who was 27-of-37 for 482 yards and five touchdowns, three of them of them to Chandler Jones. (Two other SJSU receivers, Tyler Winston and Billy Freeman, were both over 100 yards.) For Wyoming, it was tailback Shaun Wick, who went for a career-high 234 yards on just 17 carries. 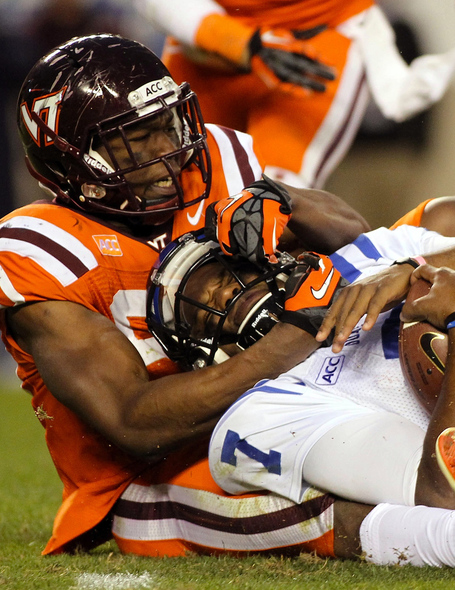 Virginia Tech finished with a 189-yard edge in total offense, amassed a 19-minute advantage in time of possession and didn't allow a third-down conversion against Duke… and still lost, 13–10, becoming the Blue Devils' first ranked victim since 1994. The starting quarterbacks, Anthony Boone and Logan Thomas, combined for eight interceptions (four apiece), zero touchdowns and an efficiency rating of 73.5.

• South Carolina finished with 423 yards passing in a come-from-behind, 27–24 thriller at Missouri, its best single-game total through the air since 1995. (Weirdly, it was also Carolina's first overtime win in school history.) Between them, quarterbacks Dylan Thompson and Connor Shaw set new highs for both attempts (56) and completions (35) in the Steve Spurrier era, while the Gamecocks' total on the ground (75 yards) was barely a third of their season average.

• Baylor went over 700 yards of total offense for the fifth time in seven games, outgaining Kansas by 435 yards in a 59–14 massacre in Lawrence. For the game, the Bears had six plays that covered at least 30 yards from scrimmage, giving them an FBS-best 43 for the season.

• Washington tailback Bishop Sankey ran up a career-high 241 yards rushing on 8.9 per carry against California, giving the Huskies a 1,000-yard rusher on the season for the fifth year in a row. As a team, Washington rolled up 642 total yards in a 41–17 rout, most by any opposing offense against Cal this century.

• Florida State scored five touchdowns on its first 19 plays from scrimmage against N.C. State, finishing with 274 yards of total offense and a 35–0 lead in the first quarter alone. Over the final three quarters, FSU settled for 292 yards and 14 points en route to a 49–17 final, barely salvaging a cover of a 32-point spread.

• After a relatively restrained first half, Oklahoma and Texas Tech combined for 47 points in the second, scoring on eight of the final eleven possessions in a 38–30 Oklahoma win. After uninspiring turns against TCU, Texas and Kansas, Sooner QB Blake Bell finished with two touchdown passes and an efficiency rating of 188.7, easily his best in five Big 12 games.

• Notre Dame quarterback Tommy Rees was 17-of-22 for 284 yards and five touchdowns against Air Force, good for the best pass efficiency rating (260.7) of his career. As a team, the Irish scored on six of their first seven possessions en route to a 45–10 blowout, the only other possession resulting in a missed field goal. 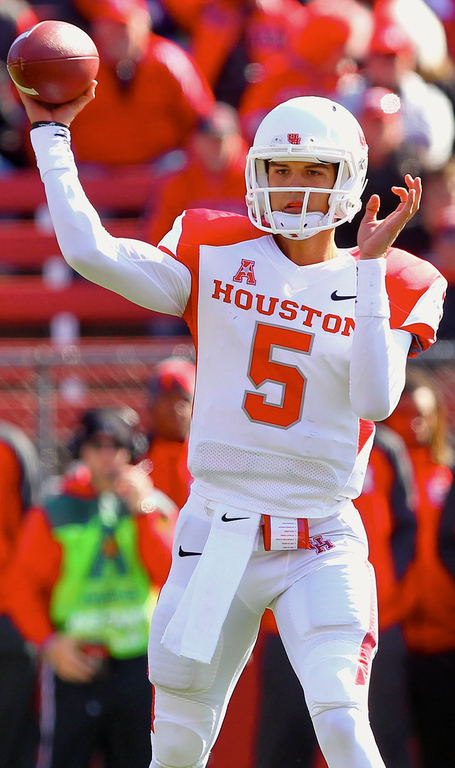 Houston QB John O'Korn was 24-of-30 for 364 yards and five touchdowns at Rutgers, good for the best single-game efficiency rating by a true freshman (236.9) in more than two years. The final score, 49–14, marked the Scarlet Knights' most lopsided defeat since a 56–5 loss to Louisville in 2005.

• Louisville QB Teddy Bridgewater was 25-of-29 for 344 yards and three touchdowns at South Florida, the fourth time in eight games this season he's finished with an efficiency rating above 200. (Nationally, Bridgewater ranks second in completion percentage and third in both touchdown passes and overall efficiency.) On the other side, USF finished with 133 yards of total offense, a single third-down conversion and a 23-minute deficit in time of possession.

• Central Florida scored on each of its first nine possessions against Connecticut, six of them beginning in UConn territory, in a 62–17 massacre. Before he was pulled, UCF quarterback Blake Bortles was 20-of-24 with four touchdown passes and an efficiency rating of 238.4; his counterpart for the Huskies, freshman Tim Boyle, was 7-of-21 with two interceptions and a rating of 33.1.

• Rice quarterback Taylor McHargue was only 8-of-19 passing against UTEP, but averaged 32.4 yards per completion with four touchdowns in a 45–7 blowout. Three of McHargue's scoring strikes went to the same receiver, Jordan Taylor, who hit paydirt from 60, 72 and 23 yards out.

• Offenses for Clemson and Maryland combined for 167 plays on 33 possessions, resulting in seven touchdowns, six field goals, eleven punts, seven turnovers and two turnovers on downs in a 40–27 Clemson win. Altogether, the Tigers ran 98 plays, most by any ACC offense this season.

• In his college debut, Tennessee freshman Joshua Dobbs led a 55-yard, garbage-time touchdown drive at Alabama, making him the first visiting quarterback to lead his team to the end zone in Bryant-Denny Stadium since Johnny Manziel last November. In between, the last six opponents to arrive in Tuscaloosa left with a combined nine points on three field goals.

• Oklahoma State racked up 342 yards rushing on 7.3 per carry against Iowa State, the Cowboys' best number on the ground against an FBS defense since September 2008. Most of the damage came courtesy of junior Desmond Roland, who had more carries (26) for more yards (219) and more touchdowns (4) than he had in OSU's first six games combined.

Georgia Tech racked up 394 yards rushing on 7.6 per carry against Virginia, overcoming five turnovers en route to a comfortable, 35–25 win. As usual, the Yellow Jackets tried to spread the wealth, getting ten different rushers in the act, but the vast majority of the damage came from just three of them, Zach Laskey, Robert Godhigh and David Sims, who went over 100 yards apiece on just 33 carries – good for a collective average of 10.6 yards a pop.

• Kansas State finished with 448 yards of total offense against West Virginia, nearly two-thirds of that number coming on four consecutive touchdown drives at the end of the third and fourth quarters. Prior to that point, the Wildcats trailed 12–7 and had only crossed midfield once on their first eight possessions; from that point on, they weren't stopped en route to a convincing, 35–12 final for their first Big 12 win of the season.

• Arizona piled up 670 yards of total offense in a 44–20 win over Colorado, the Wildcats' best total this century against an FBS defense and the third-best in school history. Most o that came courtesy of QB B.J. Denker, who added 192 yards rushing (a school record for a quarterback) to 265 passing.

• Four different players from Northern Illinois combined to throw seven touchdown passes on 27 attempts against Eastern Michigan, four of them courtesy of starter Jordan Lynch in a 59–20 blowout. (Lynch also accounted for one of the other TD strikes as a receiver, and added a sixth score on the ground.) As a team, NIU finished with 331 yards rushing and 327 passing in its 21st consecutive win over a MAC opponent.

• Boston College receivers finished with 59 yards on eleven catches against North Carolina, an average of 5.4 yards per catch with a long of fifteen. Aside from a 56-yard touchdown run by Andre Williams in the first quarter, the Eagles' other eleven offensive possessions in a 34–10 loss resulted in eight punts, a fumble, a turnover on downs and a field goal with a little over two minutes to play.

• North Texas outgained Southern Miss by 280 yards of total offense, 529–249, in a 55–14 massacre, extending the FBS' longest losing streak to 19 games and counting. UNT finished 11-of-17 on third-down conversions and rang up a 24-minute advantage in time of possession despite losing four turnovers: In characteristic fashion, Southern Miss lost five, leaving the Golden Eagles in the red in turnover margin for the seventh time in as many games.