How do we know Baylor's offense is good? Rethinking total offense and defense rankings

or is Michigan State the #1 defense in the country because it's the best, or because it hasn't played an offense worth a darn yet?

Share All sharing options for: How do we know Baylor's offense is good? Rethinking total offense and defense rankings

A discussion on this thread this week got me thinking about whether there might be a better way to rank teams when we talk about offense and defense.  Here's the posts that did it. 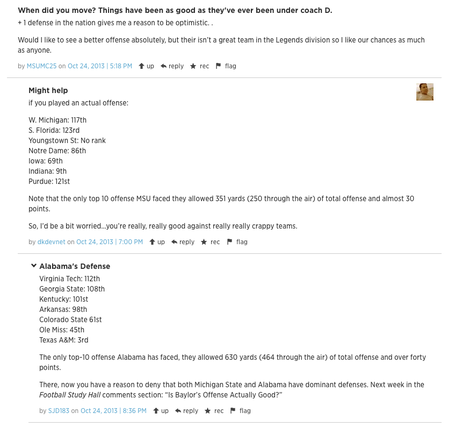 So, a hat tip to SJD183 for inspiring this post.

If only there were a way to go beyond just an yards per game average in a way that might account for the quality of offense or defense a team faced.

Advanced Stats to the Rescue

Dividing a team's total yards of offense and defense by the opponent's season average yards of defense or offense gives a percentage that shows how many more or fewer yards a team was able to generate (or keep and opponent from generating) in a way that indexes for an opponent's offense or defense quality.

By averaging out these percentages for a team's offense and defense, we get a clearer picture of which team's are making the most of the opportunities presented to them regardless of quality of opponent.  Generating the same amount of offense vs a good defensive team will result in a higher percentage than vs a bad defensive team.

I think we can effectively dismiss the criticism that Michigan's State defense doesn't deserve its ranking because it hasn't played anyone.  The teams that it has played it has held to an average of 60% of their average season yardage.  Likewise, Baylor has made the most of the opportunities presented to it, averaging 168% of it's opponents' defensive yards per game.