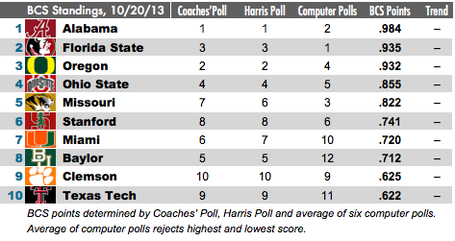 On the other hand, only four teams have made the championship game from outside of the top five at the first checkpoint: Ohio State in 2002, LSU in 2003, Florida in 2006 and Florida again in 2008. Only LSU in 2003 (No. 12 in the initial standings) has come from outside of the top ten at this stage. So yes, while there is plenty of race left to be run, several hands to be dealt, etc., and it is obviously hilarious to remember that one time South Florida, Boston College, Arizona State and Kentucky all looked like legitimate contenders at this point in the season, you're pretty much looking at the full deck right here. It's just a matter of how it gets shuffled over the next eight weeks.

• AND NOW, WELCOME BACK YOUR CRIMSON OVERLORDS. Surprise: Alabama is No. 1. Alabama started No. 1 last October, too, and finished there, just as it did after starting out at No. 2 in the initial standings in 2011. In 41 editions of the BCS standings released since 2008, the Crimson Tide have come in at No. 1 or No. 2 in 26 of them. They aren't going anywhere. 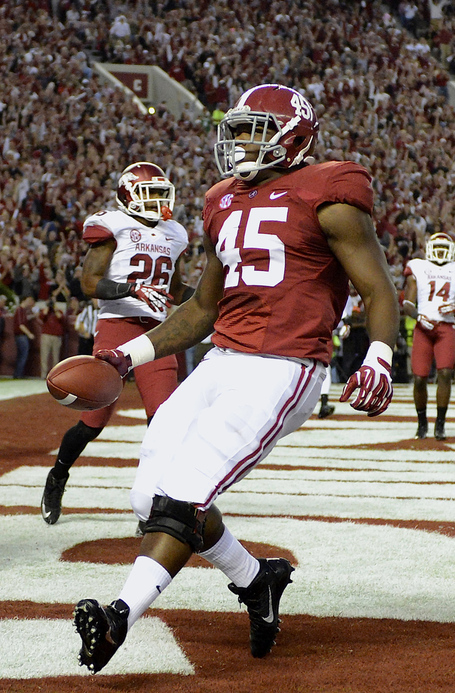 The real brass-tacks question at this point is the dead heat between Florida State and Oregon at No. 2, which has the potential to develop into the defining debate of the season unless/until one of the top three falls victim to an upset. The Seminoles take round one on the heels of their merciless, 51–14 slaughter of Clemson, despite failing to overtake the Ducks at No. 2 in either of the human polls – even without being allowed to take the stunning margin of victory into account, the computers were suitably impressed by the Noles' win in Death Valley to vault them to No. 1 in the aggregate, just enough to nudge them past Oregon in the overall standings. But look at that margin: Oregon and FSU are separated by a whopping .0028 points, the narrowest gap between any two teams in the top twenty-five. The Ducks can make that up next week against UCLA and never look back as they (finally) hit the meat of their schedule.

As long as both teams are winning, of course, the debate will never be "resolved" among the non-voting public, and probably shouldn't be. Within the system, though, Florida State still has more reason for concern going forward: Frankly, if trashing another top-five contender by 37 points on its own field isn't enough to get them to No. 2 in the human polls, good lord, what is? FSU isn't exactly putting it into cruise control with Miami and Florida waiting over the second half of the season, and the ACC Championship Game looming at the end. But Oregon's schedule gets even steeper against UCLA, Stanford, Utah, Arizona and Oregon State, leading up to (presumably) the Pac-12 title game. If the preference for the Ducks holds in the human polls – which it almost certainly will as long as they keep winning – the computers will fall in line soon enough.

• DIGITAL LOVE. The biggest disparities in the human polls and the computer polls are over two teams sitting just outside of the top ten, Auburn and Virginia Tech. The computers love both, collectively ranking the Tigers seventh (as opposed to 15th in the Coaches' poll and 17th in the Harris) and the Hokies eighth, eleven spots above their standing according to the hu-mahns. On the other end of the scale, the computers are ice-cold toward Oklahoma State (17th in the Coaches' poll, 13th in the Harris) and Louisville (16th in both), with five of the six algorithms excluding the Cowboys and Cardinals from the top 25 altogether.

• REALPOLITIK TOP TEN. Each week we take the long view to reorganize the pecking order in a more user-friendly format, according to each team's odds of actually making the championship game in January. (As opposed to where they happen to rank in a given week, which may be only a fleeting snapshot.) Projections here take future schedules and multiple possible scenarios into account. Win-loss records reflect the record necessary to fulfill each scenario. 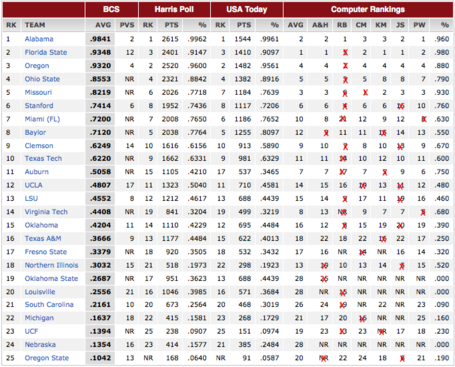 While the single most bizarre outlier this week is Oregon State coming in at No. 6 (!) according to Jeff Sagarin, Billingsley retains the crown without contest, having his ranking tossed for 15 of the top 25, more than twice as many as the nearest competition (Sagarin). Even more impressively, Billingsley's ranking was rejected for twelve of the top fifteen.

A rousing start to what's sure to be another banner year for arbitrary, BS math.