• Arizona State outgained Washington by 373 yards of total offense, 585 to 212, with most of the difference coming on the ground in a 53–24 rout. Through their first six games, the Huskies averaged 248 yards rushing on 50 carries, including 268 yards against Boise State, 244 against Arizona and 194 against Oregon; against the Sun Devils, they finished in the red with –5 yards on just 25 carries, including –55 yards on seven sacks. Altogether, Washington finished with negative yardage on seven of 16 offensive possessions and went three-and-out on eleven.

Individually, UW tailback Bishop Sankey – who woke up Saturday as the nation's leading rusher in terms of both yards and attempts, averaging 31 carries per game against FBS defenses – ran 13 times for 22 yards, his lowest total in 18 games dating back to September 2012. Meanwhile, ASU's Marion Grice finished one yard shy of a career-high on the ground with 158 yards and a pair of touchdowns. 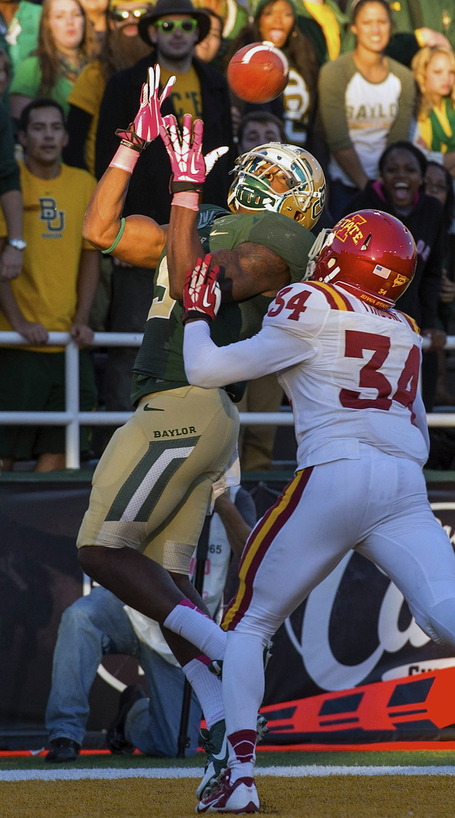 Baylor outgained Iowa State by 540 yards of total offense, 714 to 174, in a 71–7 bloodbath, the fourth time in six games this season the Bears have hit 70 points. (Before this season, Baylor had scored 70 three times in the previous 110 years of the program's existence.) Defensively, 174 yards is the fewest the Bears have ever allowed against a Big 12 opponent; if not for a meaningless Cyclone touchdown in the final minute, it would have gone down as their first in-conference shutout since 1985, as members of the Southwest Conference. At any rate, the 10-game winning streak dating back to last November is the longest in Waco since 1937.

• Northern Illinois QB Jordan Lynch ran for 316 yards and three touchdowns on 9.9 per carry against Central Michigan, the best individual total of the season to date and a new FBS record for rushing yards by a quarterback. With 32 carries and 30 passes, he's also the first player this year to crack the 30/30 barrier in the same game.

• The second player with 30 carries and 30 passes in the same game is BYU QB Taysom Hill, who accounted for 545 yards as a rusher and passer on 78 plays (34 rushes, 44 passes) in the Cougars' wild, 47–46 win over Houston. (Well, initially wild, anyway: Both teams combined for 45 points in the first quarter alone, with Houston's scores coming on a 95-yard kickoff return, a 69-yard pass and a 29-yard interception return.) As a team, BYU matched an FBS record with 115 offensive plays, which led to exaggerated numbers in all directions: Although they gained 681 yards with 41 first downs, the Cougars were also flagged 14 times and committed three turnovers. Still, after a rough start, the defense delivered in the end, holding Houston to a single touchdown in the second half.

• Florida managed a pathetic 151 yards of total offense on 2.5 per play at Missouri, its worst output since being held to 114 yards in the 1999 SEC Championship Game. For the game, the Gators had as many drives that ended in a punt or turnover (11) as they had first downs.

• Georgia managed a pathetic 221 yards of total offense on 3.5 play at Vanderbilt, its worst output since being held to 200 yards in the 2006 Chick-Fil-A Bowl. After kicking a field goal to go ahead 27–14 midway through the third quarter, the Bulldogs' final five possessions of the game generated a single first down, immediately followed by a fumble on the next play that effectively iced the loss. 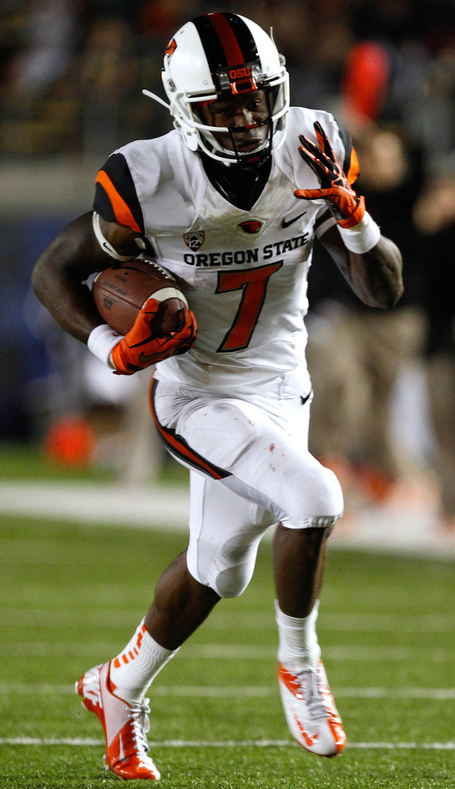 Oregon State receiver Brandin Cooks finished with 232 yards on 13 catches in the Beavers' 49–17 romp over Cal, extending his national lead for catches (76), yards (1,176) and touchdowns (11). The FBS record for receiving yards in a season is 2,060, set by Nevada's Trevor Insley in 1999. At his current pace, Cooks will finish with 2,184, and potentially more if the suddenly streaking Beavers manage to land in the Pac-12 title game.

• A gunslinger to the end, Washington State QB Connor Halliday attempted 89 passes against Oregon, easily shattering the single-game FBS record on the wrong end of a 62–38 blowout. (The previous record was held by Purdue's Drew Brees, who put up 83 passes in a 31–24 loss at Wisconsin in 1998.) For the game, Halliday finished with 557 yards, four touchdowns, four interceptions and four sacks, and the Cougars had more receivers with at least four catches to their name (eight) than they had designed runs (seven).

• At the other end of the spectrum, Kansas QB Jake Heaps finished 5-of-13 passing for 16 yards against Oklahoma, matching the fewest passing yards by any FBS offense this season. (Army, the most run-oriented attack in the nation, completed one pass for 16 yards in a 35–16 win over Louisiana Tech.) Over the final three quarters Heaps was 1-of-7 for –2 yards.

• Playing without its starting quarterback, Joe Southwick, Boise State racked up 407 yards rushing on 8.8 per carry in a 34–17 win over Nevada, easily the Broncos' best number on the ground in eight years under Chris Petersen. The vast majority of those yards came courtesy of tailback Jay Ajayi and Southwich's backup, Grant Hedrick, both of whom came off the bench to combine for 337 yards and all five of Boise's touchdowns.

• Ohio State scored on six of its first seven offensive possessions against Iowa, then ran out the clock on the eighth in a come-from-behind, 34–24 win to extend its streak under Urban Meyer to 19 in a row. For the game, the Buckeyes were 10-of-14 on third-down conversions, did not punt – a first under Meyer – and only failed to score when they turned the ball over on downs inside the Hawkeye 30-yard line in the second quarter.

• Arizona tailback Ka'deem Carey pounded out 236 yards on a career-high 40 carries against Utah, accounting for just over half of the Wildcats' total offense in a 35–24 win. Although he's earned less attention so far in 2013 than he did in his All-American turn in 2012 – he's scoring far fewer touchdowns, for one thing – Carey is back in his perch as the nation's leading rusher, and currently on pace to exceed last year's totals for yards and yards per game.

• More than 90 percent of South Carolina's total offense at Tennessee came courtesy of just three players, Connor Shaw, Mike Davis and Damiere Byrd, who combined to account for 352 of the Gamecocks' 384 yards from scrimmage in a 23–21 loss. Out of 64 plays, only three put the ball in the hands of anyone else, in large part because Shaw finished a dismal 7-of-21 passing. 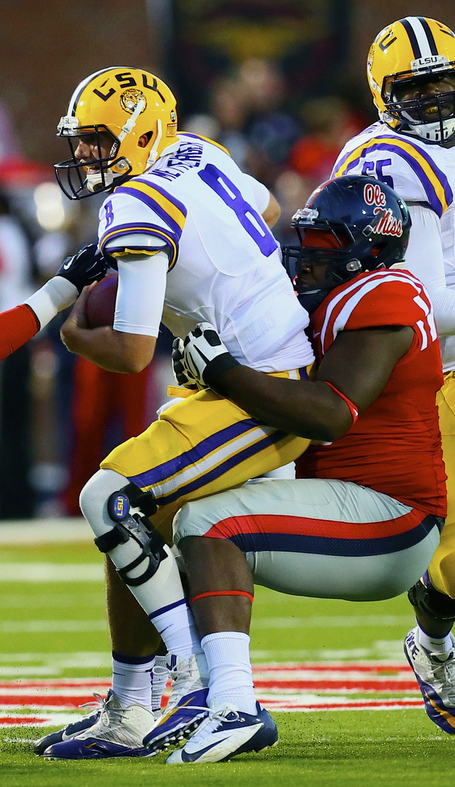 Zach Mettenberger served up three interceptions on his first dozen passes in LSU's 27–24 loss at Ole Miss, more than he'd thrown on his first 195 passes of the season coming into the game. With that, Mettenberger cedes the title of most efficient passer in the SEC to Johnny Manziel, who was only picked twice in Texas A&M's loss to Auburn.

Offensively, the Rebels' 525 yards of total offense marked the most against LSU since West Virginia racked up 533 in September 2011, and the most in a win over LSU since Auburn rode Cam Newton to 526 total yards in 2010.

• In an even wilder game, the offenses for Michigan and Indiana combined for 1,323 yards, 110 points, 57 first downs and 16 plays covering at least 20 yards in an exhausting, 63–47 Wolverine win. Records were smashed everywhere, including the Michigan record for total yards (584 by QB Devin Gardner) and the Big Ten record receiving yards (369 by Jeremy Gallon, who averaged 26.4 yards with two touchdowns on 14 catches). Twelve touchdown drives covered 60 yards or more, including all eight of Michigan's.

• Clemson QB Tajh Boyd finished with a 79.5 efficiency rating against Florida State, by far the worst of his career in 20 games as a starter in Memorial Stadium. Boyd's only worse performance in any venue came in November 2011, in a 34–13 loss at South Carolina, where he was just 11-of-29 passing for 83 yards and turned in an efficiency rating of 66.5; through the first seven weeks of 2013, he ranked among the top ten nationally with a rating of 172.0.

• Arkansas quarterback Brandon Allen connected on 7 of 25 passes at Alabama, making him just the fifth SEC passer this century with a completion rate below 30 percent on at least 20 attempts. The only worse performances in that category since 2000 were delivered by Kentucky's Morgan Newton (4-of-21 at South Carolina on 10/8/11) and LSU's Josh Booty (6-of-27 at Arkansas on 11/24/00).

• Stanford's defense held UCLA to 266 yards of total offense, less than half of the Bruins' season average through the first five games and their worst single-game output since October 2010. Seven of UCLA's eleven offensive possessions ended in a punt, and six ended without a single first down. 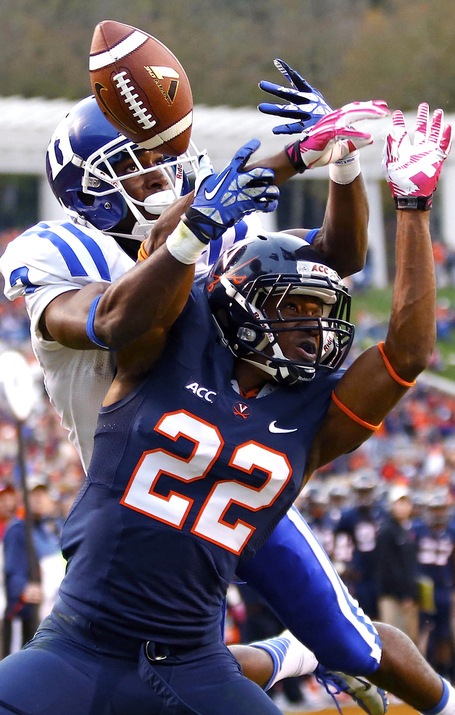 After failing to cross midfield on any of its first six possessions against Virginia, Duke's offense scored on six of its next seven to turn a 22–0 deficit in the first half into a 35–22 win. After scoring their third touchdown in the second quarter, the Cavaliers went more than 25 minutes without picking up another first down.

• Georgia Tech scored a touchdown on eight of twelve offensive possessions against Syracuse, including drives of 71, 82, 66, 89 and 76 yards in a 56–0 massacre. Fourteen different Yellow Jackets got in on the action with at least one carry, combining for 394 yards and seven TDs on the ground without an individual back over 100 yards.

• Northwestern finished –3 in turnover margin in a 20–17 loss to Minnesota, the Wildcats worst margin since finishing –7 against Wisconsin in November 2010. In 34 games in the meantime, Saturday was only the eighth in which they've finished in the red.

• Fresno State receiver Davante Adams went 75 yards for a touchdown on the first play of the game against UNLV, the first his four TD receptions – all from more than 25 yards out – in a 38–14 romp. A week after recording a career-high 16 catches for 185 yards against Idaho, Adams finished with eight for a career-high 221 yards against the Rebels, accounting for the majority of quarterback Derek Carr's 412-yard total.

• Including turnovers on downs, TCU and Oklahoma State combined for eleven turnovers, 12 punts and 18 penalties in a 24–10 win for the Cowboys. For the second time in three weeks, the Horned Frog offense failed to cross midfield before halftime.

• East Carolina outgained Southern Miss by 243 yards, 476 to 233, despite failing to generate a single play from scrimmage longer than 26 yards in a 55–14 massacre. Instead, ECU was 11-of-17 on third-down conversions, racked up 30 first downs and did not punt until well into the fourth quarter, with a 55–7 lead.

• After combining for 24 points in the first half, the offenses for Notre Dame and USC failed to score in the second, combining for ten punts, eight three-and-outs, two turnovers, one third-down conversion and two turnovers on downs in the final two quarters. The Irish sealed a 14–10 win in appropriate fashion, on three straight incomplete passes by Trojan QB Cody Kessler to end the night.