Box Scorin', Week 7: In which South Carolina takes its sweet time (and Arkansas', too)

Share All sharing options for: Box Scorin', Week 7: In which South Carolina takes its sweet time (and Arkansas', too)

• South Carolina scored on eight of ten offensive possessions at Arkansas, amassing an incredible 27-minute advantage in time of possession in the course of a 52–7 win. Five of the Gamecocks' scoring drives took at least four minutes off the clock, including second-half marches that chewed up 9:29 and 7:23, respectively, en route to a pair of demoralizing touchdowns.

On the other side, following an extended touchdown drive to open the game, Arkansas' final ten possessions yielded as many turnovers (three) as first downs on just 30 plays. Not that the categories were mutually exclusive: Two of those three first downs came on long runs that ended with the runner losing a fumble.

• With three more touchdown passes against Washington, Oregon quarterback Marcus Mariota extended his touchdown-to-interception ratio for the season to 17–0, easily the best among FBS quarterbacks. Dating back to 2012, Mariota has thrown 236 consecutive passes without an interception since the first half of the Ducks' eventual loss to Stanford last November, the longest streak in the nation. The only other quarterback who has attempted at least 100 passes without a pick in 2013 is South Carolina's Connor Shaw.

• Texas A&M and Ole Miss combined for 1,049 yards of total offense in a 41–38 Aggie win, much of it coming in a fourth quarter that featured five touchdowns and 41 points in the final 15 minutes alone. Despite an early injury scare, Johnny Manziel passed for 346 yards and ran for 124 more in the win, the fourth time he's broken the 300/100 barrier in 18 career starts. No other FBS quarterback has done it more than twice. 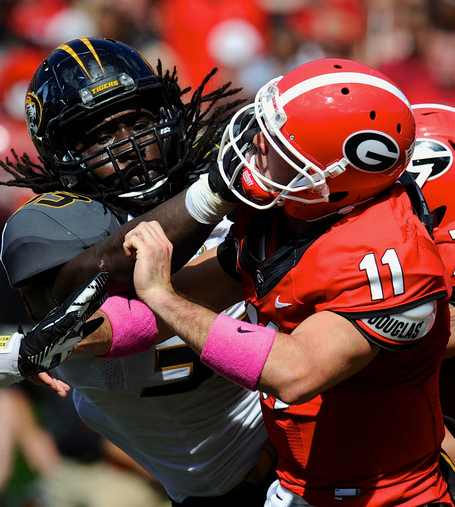 Georgia, missing its top two tailbacks, attempted 45 passes to just 31 runs in its loss to Missouri, easily the most pass-heavy ratio of Aaron Murray's career as a starting quarterback. Before Saturday, Murray had only attempted 40 passes in a game once, finishing 16-for-40 in a lopsided loss to LSU in the 2011 SEC Championship Game.

• Washington State closed a late-night game with Oregon State by committing six turnovers in its final 18 plays – two fumbles, four interceptions – allowing the Beavers to turn a 24–17 deficit late in the third quarter into a 52–24 win. Aided by the turnovers, the Beavers ripped off five unanswered touchdowns in a little under ten minutes, three of them by Brandin Crooks, who exited the victory as the FBS leader in receptions, receiving yards and receiving touchdowns.

• Syracuse pounded out 362 yards rushing on 9.1 per carry in a 24–10 win over N.C. State, most allowed on the ground by N.C. State this century. Two Orange backs, Jeremy Smith and Prince-Tyson Gulley, went over 100 yards apiece, and quarterback Terrel Hunt came within striking distance at 92 yards.

• Stanford's Ty Montgomery racked up 296 all-purpose yards in a 27–21 loss at Utah, the second week in a row he's outgained the rest of the team combined. Against Washington, Montgomery ran a kickoff back for a touchdown and generated the Cardinal's two longest plays from scrimmage, a 26-yard run and a 39-yard reception. On Saturday, he ran a kickoff back for a touchdown and finished with 131 of the team's 246 receiving yards, including a 45-yard gain on a screen pass that set up Stanford's only score of the second half.

• Texas, a two-touchdown underdog in the Red River Shootout, held Oklahoma to 263 yards of total offense and a single offensive touchdown in a 36–20 upset, the Longhorns' best performance against a Big 12 offense since November 2011. (In a dozen conference games in the meantime, Texas was yielding 443.8 yards and 35.8 points per game.) It also marked Oklahoma's worst offensive outing against any defense since a September 2007 loss at Colorado. Three of the Sooners' 12 offensive possessions resulted in points; the other nine yielded six punts, two interceptions – one of which was returned for a Texas touchdown – and a turnover on downs. 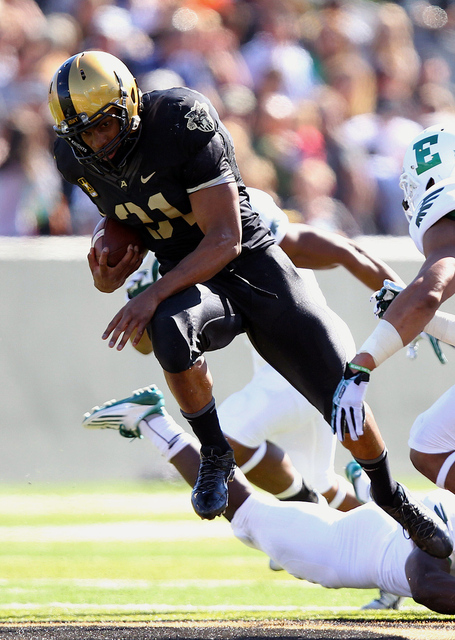 Army RB Terry Baggett ran for 304 yards on 16.9 per carry against Eastern Michigan, scoring on touchdown runs of 12, 67, 34 and 96 yards in a 50–25 win. Baggett's total makes him the first player this season over 300 yards in a single game, and Army is only the third team over 500 yards on the ground against an FBS defense.

• Baylor completed just 12 passes against Kansas State, tied for fewest since Art Briles' first season as head coach in 2008, but also averaged 27.7 yards per completion in a 35–25 win. True to form, K–State hogged the ball for nearly 40 minutes in time of possession, limiting the Bears to a season-low 59 plays – 22 below its average through four games. But the Wildcats couldn't stop Bryce Petty from connecting on three touchdown passes covering 93, 72 and 54 yards, respectively, to receivers Antwan Goodley and Tevin Reese, who subsequently rank first and second nationally in yards per catch.

• In the game of the day, Michigan and Penn State combined for seven turnovers and five missed field goals in a wild, four-overtime thriller that was all the more entertaining for the mistakes. In extra time alone, kickers Brendan Gibbons and Sam Ficken missed two potentially game-winning kicks outright and had a third blocked – not to mention the last-second miss by Gibbons that commenced overtime in the first place – and Penn State receiver Allen Robinson lost a fumble that could have spelled doom for the Nittany Lions if not for a subsequent Gibbons shank a few plays later. Together, quarterbacks Devin Gardner and Christian Hackenberg completed 51.3 percent of their passes with four interceptions… and six touchdowns.

• South Florida won at UConn, 13–10, without scoring an offensive touchdown, the second week in a row the Bulls have won without finding the end zone on offense. After scoring on both defense and special teams against Cincinnati, USF hit paydirt against the Huskies on a 44-yard fumble return by defensive end Aaron Lynch in the first quarter, and from there only needed a pair of field goals from Marvin Kloss to clinch the win.

• Alabama outgained Kentucky by nearly 500 yards of total offense, 668 to 170, setting a new high for total yards in the Nick Saban era. Most of that production came from the arm of A.J. McCarron, who finished with a career-high 359 yards – though only one touchdown pass – in a 48–7 blowout.

• In the first half against Boston College, Clemson failed to score on five separate trips into B.C. territory, on drives that resulted in two fumbles, two turnovers on downs and a missed field goal. (Boston College led at the half, 7–3.) In the second half, the Tigers were three-for-three on the Eagles' side of the field, producing two touchdowns and successfully killing the clock on a 24–14 win. 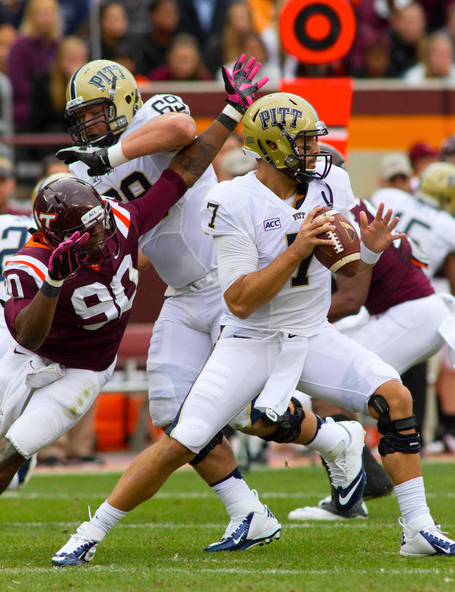 Pittsburgh quarterback Tom Savage was sacked eight times at Virginia Tech, leaving Tech with more sacks for the season (27) than any other FBS defense. (On the other hand, Savage has taken more sacks than any quarterback except Idaho's Chad Chalich.) Six different Hokies got in on the party against Pitt, led by Dadi Nicolas with three.

• Northwestern finished with more punts (11) than first downs (10) in a 35–6 loss to Wisconsin, failing to score a touchdown in any phase for the first time since October 2006. On the ground, the Wildcats were held to 44 yards with a long gain of ten, a major reason they finished just 2-of-17 on third-down conversions.

• East Carolina finished with a 233-yard edge in total offense, punted only once and didn't allow an offensive touchdown in regulation at Tulane… and still lost, 36–33, in a triple overtime baffler. Although ECU had eight chances inside the Tulane 30-yard line in regulation, it came away with just one touchdown, settling on the other seven occasions for six field goal attempts – four good, two missed – and an interception that went 99 yards the other way for the Green Wave's only touchdown in the first 60 minutes.

• Virginia finished with significant edges in total offense, time of possession and turnover margin at Maryland… and still lost, 27–26, when a last-second field goal sailed wide. Before the decisive kick, the Cavaliers had already settled for field goals on four separate trips inside the Maryland 15-yard line – including two on drives that started inside the 20 following Terp fumbles.

• Jeremy Hill rushed for 121 yards on 6.4 per carry in LSU's win over Florida, joining Todd Gurley as the only individual backs over 100 yards against the Gators the last two years. (Hill also had a reception for 30 yards, the longest gain of the day for either offense.) Altogether, LSU was the first team this season to dent Florida's defense for 300 total yards, and averaged more yards per play (5.84) than any opposing offense since Furman in November 2011.

• A week after racking up 412 yards against Iowa, Michigan State finished with 473 yards in a 42–28 win over Indiana, its best production in a Big Ten game since October 2010. For the game, the Spartans were 10-of-14 on third-down conversions and delivered six touchdown drives covering 60 yards or longer. 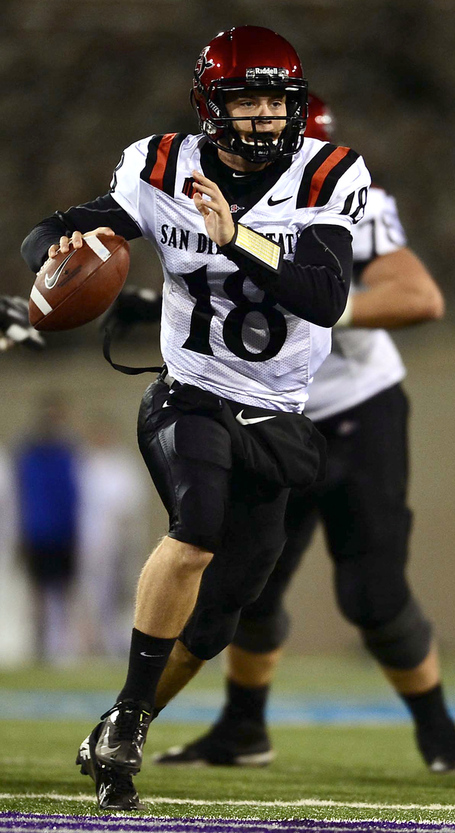 Trailing 20–6 at the start of the fourth quarter, San Diego State embarked on three consecutive touchdown drives covering 80, 81 and 77 yards to beat Air Force, 27–20. All three touchdowns came from the arm of junior college transfer Quinn Kaehler, dropping the Falcons to 1–6 overall and 0–5 in Mountain West play.

• San Jose State bombed Colorado State for 606 yards of total offense, most of it coming from the arm of David Fales, who connected on three 60-plus-yard touchdown passes to three different receivers in a 34–27 win. Between both teams, 16 receivers combined to average 15.8 yards on 47 catches.

• Arizona State scored on nine of its first ten possessions against Colorado, building a 54–6 lead before cutting the engine early in the second half of a 54–13 win. The final drive of the game took a little over 11 minutes off the clock and ended with ASU inside the Colorado 10-yard line, mercifully declining to add to the carnage.

• Louisiana–Monroe finished with 192 yards of total offense against Texas State, 75 of them coming on a game-winning drive in the final three minutes for ULM's only offensive touchdown in a 21–14 win. The WarHawks' first two scores came on a pair of first-half interception returns by Isaiah Newsome, covering 71 and 75 yards.

• UCLA finished with 488 yards of total offense in a 37–10 win over Cal, only the second time in six games the Golden Bears have held an opposing offense below 500 yards or 40 points. Last year, Sonny Dykes oversaw the nation's 119th-ranked scoring defense at Louisiana Tech; halfway through this year, his new team ranks 124th.

• Texas Tech finished –3 in turnover margin and allowed a kickoff return for touchdown against Iowa State, but still won, 42–35, by outgaining the Cyclones by 355 yards of total offense. In part, that's because the Red Raiders ran so many more plays: With 101 on Saturday, they're averaging 89.9 for the year, second only to 91.8 for Cal.

• Kansas converted just 2 of 16 third-down attempts at TCU, finishing with more punts (10) than first downs (7) in a 27–17 loss. The Jayhawks' only points of the game came as a direct result of three TCU turnovers, including an interception return for a touchdown, but two other giveaways in Horned Frog territory resulted in a punt and a missed field goal.