Share All sharing options for: QBR and winning percentage

Bob Stoops created a minor flurry last week when he took a jab at the SEC's sudden inability to stop good QBs from putting up big numbers:

"Just a few years ago, we had all the quarterbacks," Stoops said in a small session with beat reporters, according to The Oklahoman. "And now, all of a sudden, we can play a little better defense and some other people can't play defense.

"Funny how people can't play defense when they have pro-style quarterbacks over there, which we've had. They're all playing in the NFL right now."

In the same time period, the SEC had the following QBs drafted in the top 4 rounds:
10 high-round NFL QBs in the Big 12 to 5 over that time period in the SEC. It's doesn't take an expert to tell you that Big 12 defenses probably had a tougher time stopping NFL talent than SEC units did.
Stoops' comments got me to thinking about the relationship between a quarterback and a team, though. I thought it would be interesting to look at a simple relationship: QB play and winning. I took each team's QBR ratings from 2009-12 and compared them to team winning percentages. The scatter plot looks like this: 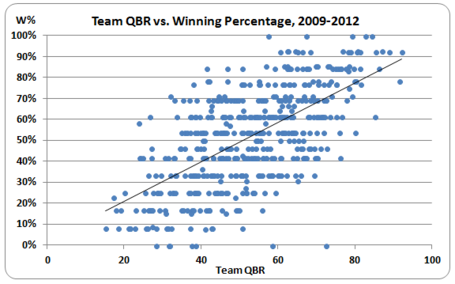 As I mentioned, I'll have more on QBR as the season rolls along.