Share All sharing options for: The Key Drive: Clemson 26, Auburn 19

Welcome to the first installment of a new weekly piece at Football Study Hall, The Key Drive. The Key Drive will focus on one drive a week that highly impacted the outcome of a game, essentially the drive that was the key to winning or losing.

For this opening week I decided to focus on Clemson's 10-play, 75-yard touchdown drive in the fourth quarter that put them ahead of Auburn by four points with 9:17 remaining. The touchdown here changed the dynamics of the game from, "Who could kick the last field goal?" to suddenly, "Auburn needs a sustained touchdown drive." After the jump we will set the scene and look at how Clemson's offense was able to march the ball down the field.

Auburn had just intercepted Tajh Boyd and started with the ball on Clemson's 35. Clemson's defense was able to hold Auburn to a field goal thanks to a holding call against Auburn at the 9 yard line. That was the last of three straight scoring drives by Auburn (all field goals though) and the momentum was slowly starting to slip away from Clemson. After a touchback Clemson started the drive with the ball at the 25 yard line. Up until this point, Clemson had only one possession end in a touchdown, mainly due to an incredible run by Andre Ellington (reminiscent of the Michael Dyer's run in the BCS Championship Auburn had two years ago). We can look into our trusty tool box at Equivalent Point Values for yard lines to see that teams that start with the ball on their own 25 are only expected to score about 1.2 points on that drive. Clearly Clemson had some work cut out for them if they were going to be able to sustain a long touchdown drive.

On this play Clemson lines up in the pistol with two receivers right and an H-back to the left side of the line. Auburn lines up in a 4-2-5 (four down lineman, two linebackers, and five defensive backs). 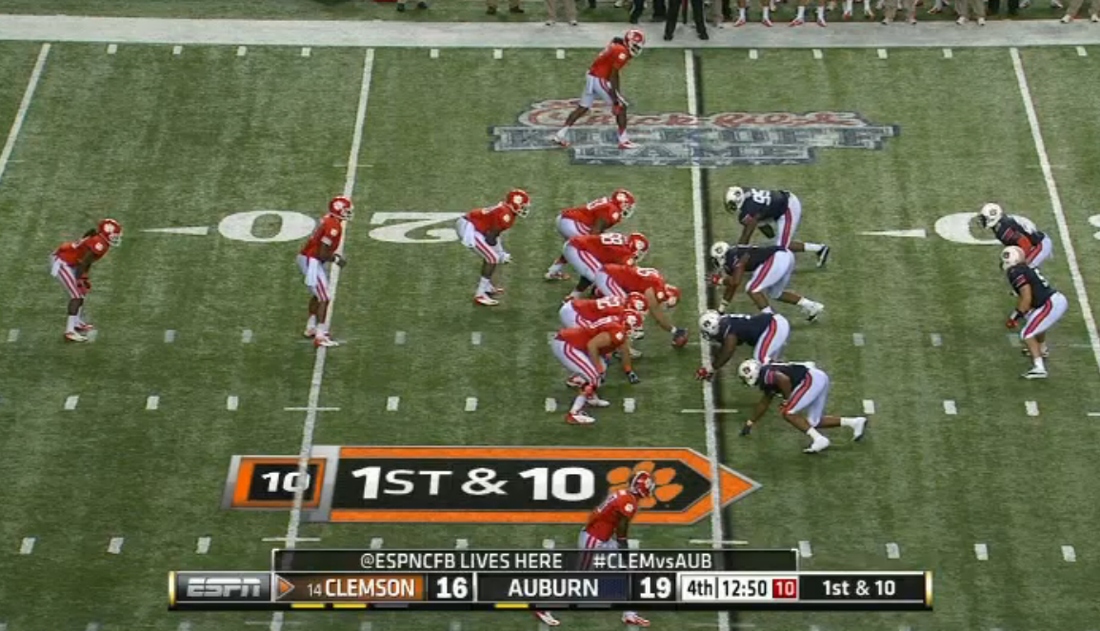 Clemson runs a simple dive play to Ellington, each offensive lineman blocks the man in front of him one-on-one or moves up into the second level to block a linebacker. When you can give a back like Andre Ellington a chance to run untouched for three yards you will probably get some solid yards out of it sooner or later.

Clemson gets back to the line quickly to run the next play. This really handicaps what plays Auburn can run on defense, forcing them to line back up in their base 4-2-5 alignment. On this play, Clemson uses this to its advantage. Tajh Boyd runs a zone read with Ellington out of the pistol. The strength of the offense lies on the right side with two receivers and the H-back lined up right. This is the direction of the zone read, and subsequently the defense over-reacts to Andre Ellington faking right.

The defensive end away from the running back usually crashes down to force the quarterback to keep the ball, and the outside linebacker on the weak-side is tasked with stopping the QB. On this play, the defensive end crashes, but the linebacker gets completely turned around. At first he steps up correctly to fill the hole left by the DE but then runs back inside to go after Ellington. He actually doesn't even get blocked on the play, but when your back is turned away from the guy with the ball, it will be hard to get a stop. 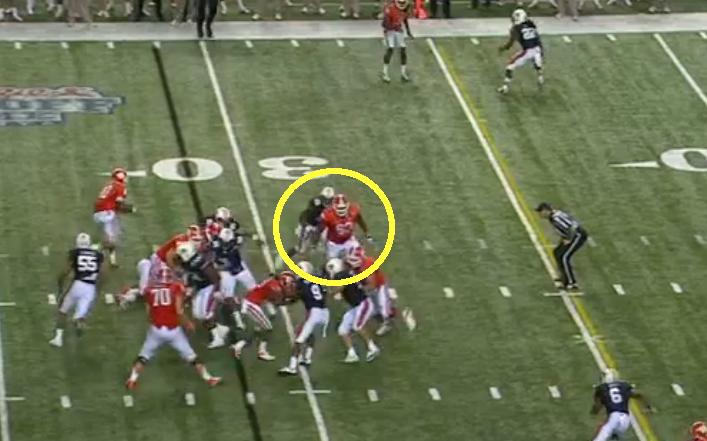 With nothing in front of him but green, green turf, Tajh Boyd has a nice run of 27 yards.

On this play Clemson lines up with three receivers right and only Ellington in the back field. DeAndre Hopkins is alone on the left side, and because of this the corner back gives him a nice cushion. Tajh Boyd makes a great read and makes a decent throw to Hopkins for an easy four yards. Auburn again lines up in the 4-2-5, but this time the Tigers bring the slot corner on a blitz and bring the safety down on the trips. Any quick route to either side probably would have been open considering how much of a cushion the back four of Auburn are giving Clemson's receivers. 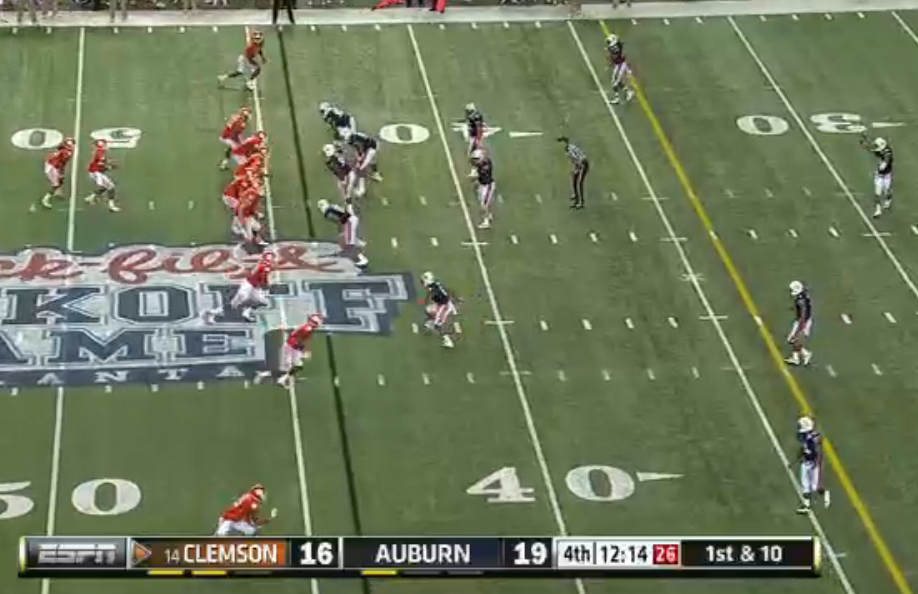 Clemson again lines up in the base pistol formation, and their speed getting to the line forces Auburn to do more of the same, 4-2-5 with the slot corner playing up on the slot receiver and the outside corners giving a cushion. A great jump on the pass rush forces Boyd to tuck it and run for what he can. It is hard to tell if anyone was going to be open or not from the TV angle, although it is interesting to note that the single corner matched up against Hopkins on the left comes up at the snap to take away any short quick routes. Probably an adjustment made after the last play.

Up to this point, Clemson was 5-for-13 on third downs, but 0-for-3 this half. Clemson motions the H-back to the side of the two receivers; they look to run two quick slants with the receivers and a quick flare with the H-back to the left side. The slants were very well-covered and the flare-out didn't look like it would get that much. Because the play called for quick slants the offensive lineman on the left side "cut blocked" the defensive lineman by diving at their knees. This usually prevents the defensive lineman from standing up much longer and provides the QB with much easier passing lanes. On this play it helps because once Tajh decides to run the the ball, half of the defensive lineman are still on the ground; from there his speed and athleticism net him a 10-yard gain.

Tajh Boyd seemed to injure himself on the previous play and had to come out of the game. Clemson runs the zone read again but this time with the backup quarterback. The weakside DE now pauses and plays the quarterback, so it is Andre Ellington's turn to get the rock. A gain of three when pretty much the whole defense knows you are going to run the ball is not half-bad.

Clemson comes out this time in the shotgun. They motion one of the receivers from the right side into the backfield and behind the quaterback. From there the quarterback hands the ball off to Andre Ellington, then fakes a toss or pitch to the WR in motion. The running play is very simple here, the guards both pull to the right, and Andre Ellington takes the ball on a handoff for a sweep play. Everything you are taught as a linebacker tells you to follow the guards to where the play is going. However, the motion and subsequent play fake causes enough hesitation by the linebackers for the guards to get around them and seal off the edge.

Ellington then does the rest for a gain of eight yards.

This is where the benefits of a hurry-up offense can be seen. On these next two plays Clemson lines up in the same formation we have seen them running in seven of the nine plays so far. Pistol, H-back to one side of the line, three receivers. 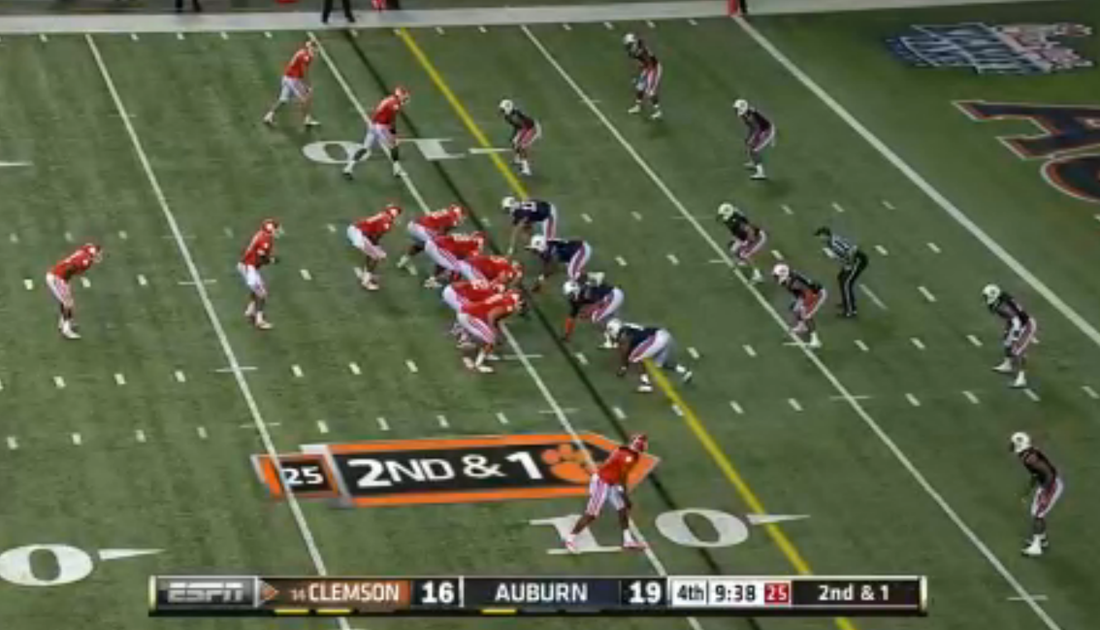 Auburn is forced to line up in their base 4-2-5 again, and Clemson takes advantage. This whole drive the Clemson offensive line has been getting great push and has not let any of Auburn's defensive lineman get off their blocks. On this play Clemson takes the right guard and the H-back on the left side and "curls" them up to the linebackers. The rest of the line blocks the defensive lineman one-on-one.

From there it is up to the Clemson running back to make a person miss. Ellington accomplishes this to the tune of nine yards, and his backup, Howard, gets tripped up after five yards. Clemson simply knew they could get easy yards against a tired Auburn defense and ran the same exact play out of the same formation twice.

This fade is simply a thing of beauty.

Well, there you have it, folks. Clemson used a fast-paced, hurry-up offense to tire Auburn's defense. They relied on the athleticism of both quarterback Tajh Boyd and running back Andre Ellington. Clemson's line was able to provide holes for the backs to run through, and, outside of a couple of great jumps by Auburn's defensive line, they also pass-blocked very well. If Clemson can continually put together sustainable drives like this one, their offense will be a lot of fun to watch again this year, especially when Sammy Watkins returns.